The Art Fair by David Lipsky

Whenever I read a book on the subject of childhood and families, I think of the opening line in Tolstoy’s Anna Karenina:

“Happy Families are all alike: every unhappy family is unhappy in its own way.” 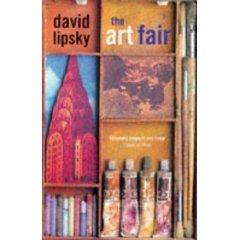 And that brings me to The Art Fair by David Lipsky, a book written through the eyes of a young man named Richard Freeley. Focusing on childhood and adolescence, it’s a bitter-sweet memoir of Richard’s relationship with his mother who was once a popular painter.

The story begins with a incident that took place in Richard’s life when he was ten years old. He is at the airport to make another annual trip via plane across the country to visit his mother. At that time, Richard’s parents are divorced, and Richard and his older brother, 13-year-old Jon live in California with their father and stepmother while their mother, Joan lives in New York. In this chapter, Lipsky captures the essence of the misery of being a child of divorced, battling parents. The trip is dreaded–not for the journey, but for all the associated trauma–the farewells and the reunions, the adjustments, and the hollow feeling as suitcases are packed and unpacked.

It’s at the airport as Richard says good bye to his father that he learns to manipulate adults. It’s an inadvertent lesson. Richard is already aware that his tears at the airport “perked Dad up. He tried not to show it–it wasn’t dignified, this pleasure he took in thinking he was the parent we loved best.” The tears evolve into reluctance to board the plane, and then a frustrated air stewardess, under stress to get the children on board without dragging them to their seats, offers the boys a free upgrade to first class:

“What I had never anticipated was how much nicer it was . The larger seats. The footrests. Those ads that bragged about leg room–they weren’t kidding. I had shuffled through first class to coach maybe ten times in my life, and had never looked around. They were bringing the adults there champagne and orange juice. They brought us two glasses of orange juice each. Jon and I became very quiet–as if we might jar our good fortune by making too loud a peep. We looked at each other silently, in sparkly first class. I walked back to peep behind the curtain into coach–where we would have been sitting. It suddenly looked awful and cramped and shabby–and it made sense to me. This was second class. It wasn’t meant to be as nice. It was meant to be workmanlike and shuffling; you weren’t supposed to enjoy it. It seemed an important distinction; you could travel through life with the minimum, just to get through, or you could enjoy it. I tried to find the seats Jon and I were supposed to have occupied. I looked at our fellow passengers and thought, Those boobies.”

When I first read that passage, I thought I was going to read a novel about how Richard develops a taste for the finer things in life, and it’s true that this incident to free first class upgrading becomes an annual ritual as Richard learns to enhance and perfect his tragic performance for a string of sympathetic air stewardesses.  While Richard learns that scenes in airports bring rewards, his family mark him as the “more emotional” son. So it makes sense when after one holiday with his mother, Richard decides to stay behind in New York and not return to California.

From this introduction, Richard goes back in time to the late 60s when his “mother became a painter.” Casting aside plans for a summer in Connecticut, instead Joan drags her husband and her children to East Hampton. Life changes as Joan throws herself into painting and her ad executive husband returns to New York and visits his family on the weekends. At the end of the summer, Joan has a dealer, Gregor, who’s interested in her work, and she begins to launch a foray into the art world. As Joan’s career as an artist takes off, her husband decides he wants to be a novelist, and so the family moves to a farmhouse in Vermont. And then Richard’s parents’ marriage begins to deteriorate….

Author David Lipsky captures the difficult years as a child of divorced parents–the fights, the lovers, the wrangle for child support, and Richard’s father’s subsequent revenge as he resorts to petty behaviour and bribes to ‘win’ his children to his side:

“Dad got an apartment. He made this apartment very attractive to boys–Dad the boy-catcher, Dad the life-advertiser. It was in our old Upper East Side neighbourhood, a few blocks from the park. The divorce went through. Mom wanted a good settlement, and she did kind of a cruel thing. She used the novels Dad had written in Vermont. The first was about a man who loved his painter-wife too much. He helped get her work commercial, introduced her to painters and critics–and then she became famous and, well … the novel ended there, with the painter famous, and the good-hearted husband following her to a party. The second novel–Double Life, Double Wife–was about a man who quits his job as an advertiser and makes his wife support him through prostitution. Mom’s lawyer read aloud from this novel in the  courtroom–with Dad at the other table–and the judge, hearing it, immediately doubled her child support. Then Dad made his second move. He called on the phone. ‘Ok, whisper,’ he said. We whispered. ‘What’s your allowance?’ We answered. ‘And what is she feeding you?’ We told him. ‘Do you know,’ he said, ‘that I am giving her one thousand dollars a month, and it’s all supposed to go to you? Why don’t you ask  what she’s spending it on? You have your father’s permission?’ “

With their father playing the role of a domestic Iago, rot sets into the familial relationships. Soon the children feel as though they have to pick sides, and what better way to pick sides than to move in with the most aggrieved parent.

If you are a child of a divorce, there’s a lot to relate to here, and the great thing about the book, the feature that I enjoyed the most is that Lipsky writes with wit and honesty. Every time I browse through new book titles, there seems to be no slow down in the epidemic of ‘dysfunctional family’ books–but Lipsky’s adults are just ‘normal’ divorced people. They’re not bad, loony, evil or twisted. They are just two adults who change, grow apart, and exact revenge against the ex-partner. The divorce is made that much bitterer by the fact that Joan becomes famous while her husband’s ambitions fizzle and die.

The novel traces Richard’s life with his free-spirited mother and the terrific feeling of responsibility he has towards both her success and her failure. Living alone with his mother, Richard becomes his mother’s confidante, friend, and social companion, and there’s a point at which Richard has to learn to let go. I don’t know a thing about the art world, but after reading the book, I don’t think I missed much by not being part of the art crowd. Lipsky paints a rather unpleasant picture of a cliquish set of people–the talented, the newcomers, the has-beens and the wanna-bes. Artists on the way up and artists on the way down.

There are some great characters here–the cutthroat dealers and the bitchy artists, and they all seemed remarkably real. Richard’s mother is a bit too idealized and the novel’s conclusion doesn’t quite deliver, but on the whole, a well-written, entertaining and poignant novel.