The Dream by Zola 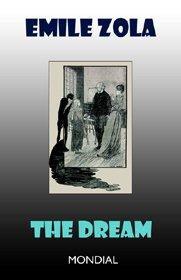 The Dream (La Reve) is the 16th novel in Zola’s twenty-volume Rougon-Marquart cycle. For those who’ve read my Rougon-Macquart posts, you already know that I am reading the novels in the order in which they were written. This is not the way everyone reads them, and I’ve read plenty of recommendations that say the series absolutely shouldn’t be read this way. The novels do jump around between family members and branches of the Rougon-Macquart family, and the novels also jump around in time. No doubt there’s an argument to read the novels following a time frame or a particular branch of the family, but I decided to read them in the order in which Zola wrote them, and I’m glad I did. More of that later when I finish the series and write a wrap-up post.

The Rougon-Macquart novels explore the two branches of one family. The Rougons are ultimately more successful and in theory more respectable, while the Macquarts are working class and have a tendency to sink into drunkenness. The family matriarch, the last of a noble line, Adelaide Fouque appears in the first novel, The Fortunes of the Rougons. Adelaide–who behaves oddly in her youth, marries a peasant and produces a legitimate son named Pierre. Then Adelaide hooks up with a poacher and produces two more illegitimate children, Antoine and Ursule. Adelaide later goes stark raving mad.

The Macquart family trait of madness appears again in Marthe (The Conquest of Plassans). In Marthe’s case, her madness manifests itself in her excessive religious faith, but her extreme religious devotion is socially accepted. And it’s Marthe I thought of when I read The Dream. Marthe and Sidonie are sisters–and that makes Angelique, Marthe’s niece. And just as Marthe’s madness wrapped itself around religion, so also does Angelique’s. Then again, Angelique is reminiscent of Jeanne Mouret, daughter of Helene (A Love Episode). Jeanne inherits her great-grandmother Adelaide Fouque’s mental instability and in this case, it’s manifested in neuroses and obsession. In The Dream, Zola once again creates a portrait of fanatical religion masking unhealthy neuroses and madness and shows that when religious mania combines with the pathology of institutions and power, the results are toxic.

The Dream (La Reve) concerns Angelique, the daughter of Sidonie Rougon. To place these characters in the Rougon-Macquart family tree, Sidonie is the sister of Eugene “the greatest of the Rougons,” a character who dominates His Excellency (volume 6). Sidonie is one of the most revolting characters in The Kill (volume 2), and in this novel, she pimps her sister-in-law Renee Saccard, contributing to Renee’s destruction.

In The Dream, Angelique is Sidonie’s bastard child, abandoned by her mother and given to an orphanage. When The Dream begins, Angelique, a child in rags,  is standing outside of a cathedral in Beaumont. It’s snowing, and the child is freezing to death when she’s spotted by Hubert and his wife, Hubertine, a childless couple who make beautiful ecclesiastical embroideries for a living.

Well, you should know what’s coming next…the Huberts take in Angelique and eventually adopt her. Angelique is a strange child who grows into a strange woman. Unhealthily obsessed with tales of the saints, she is an incredibly talented seamstress whose intricate embroideries are matchless. All of her passion and devotion goes into her designs and the cloth she sews, and of course the time comes when Angelique falls in love with a young man.

Angelique’s obsession with her needlework and the lives of the saints is acceptable to her adoptive parents who live (literally) in the shadow of the cathedral, but when she forms an attachment to the heir of a noble family, she simply transfers that level of obsession–with disastrous consequences. Her adoptive mother, Hubertine, contributes to the tragedy by instilling in Angelique the need to “obey” and to “submit.” Hubertine believes that her mother’s curse on a marriage of which she did not approve resulted in the death of her only child, and so her religious beliefs consequently warp into notions of obedience to ecclesiastical authorities. This passage describes Hubertine’s indoctrination of Angelique:

“Little by little, Hubertine gained great authority over her. She was particularly adapted for such a task, with her kind heart, her gentle firmness, her common-sense and her uniform temper. She taught her the duty of obedience and the sin of pride and passion. To obey was to live. We must obey god, our parents, and our superiors. There was a whole hierarchy of respect, outside of which existence was unrestrained and disorderly. So, after each fit of passion, that she might learn humility, some menial labour was imposed upon her as a penance, such as washing the cooking-utensils, or wiping up the kitchen floor; and until it was finished, she would remain stooping over her work, enraged as first but conquered at last.”

While Angelique daydreams of various saints and the glories of the injustices dealt to them, she creates parallel daydreams involving a handsome, wealthy young man who will come to her and fall in love. Angelique fixates (as she does with everything) on the fact that her suitor will be wealthy. The fantasies she spins rival Sleeping Beauty or Cinderella in their details of castles, gold and happily-ever-after scenarios.  As it turns out, Angelique’s daydreams do partly come true, and her love interest, Felicien is the son of the wealthy Bishop, a proud, stern man who forbids the match.

As a Zola novel, The Dream is a huge disappointment arriving, as it does, after the phenomenal The Earth. It’s hard to grasp that the same mind fashioned both books, and The Dream goes in the stack of the not-great Zolas. Well every book can’t be a masterpiece, right? The book might appeal more to the very romantic or the religious, so that leaves me out. Angelique is a disappointing heroine; she loves to the point of obsession, but refuses to disobey the ‘authorities’ who rule her life. The result is her destruction and about 200 pages of burning martyr. The Dream says a lot about the entwining of pride and religion and the tyranny of those who believe they have religious authority over other people. Those are excellent points, but this is embedded in pages of religious myths as Angelique daydreams and prattles on about various saints and their various trials. At one point I counted either 11 or 12 straight pages of religious myths of saints, and while this was an extreme example, this sort of stuff occurs throughout the novel.

By the end of the story, we can see how all this indoctrination ultimately damages Angelique’s thinking and poisons any free will she might have had, and since her head is filled the martyrdom of her childhood heroes, she’s ready to become one. It’s an interesting exercise but the journey to the last page was, I admit, fairly torturous.

I read the Eliza E Chase translation from Mondial Books.

5 responses to “The Dream by Zola”