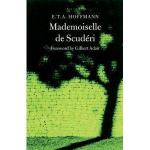 It’s odd how reading patterns interconnect. I just finished Hoffmann’s Mademoiselle de Scuderi and then began reading a book about the life and work of Lermontov. And there in one of the chapters, I read about Lermontov reading Hoffmann.

After finishing Mademoiselle de Scuderi, I find myself wondering what Lermontov thought of it….

This is the first book I’ve read by Hoffmann, a German Romantic author (and other things) whose works frequently used elements of horror and the supernatural.  I read somewhere or another that the story is supposed to be one of his best. That admitted, I’ll add that I wasn’t crazy about the story, but more of that later.

Mademoiselle de Scuderi (who was a real person, Madame de Scudery) is the heroine of this story set in the 17th century during the reign of Louis XIV. According to the foreword by translator Andrew Brown, there are “historical realities that formed the basis” of this tale, although Hoffmann did take some liberties with the dates of Mademoiselle de Scuderi’s novel, Clelie. The tale is set after in the aftermath of the 1677 ‘affair of the poisons’ and the subsequent trial. The ‘affair of the poisons’  is detailed along with the crimes of Madame de Brinvilliers, who with her lover and accomplice Captain Godin de Sainte-Croix,  served up poisonous “dinners from hell.”  Desgrais, an officer from the mounted police eventually captured Madame de Brinvilliers by luring her from a convent for a tryst. But the episode leaves Paris infected with paranoia–everyone is suspicious of everyone else and in spite of arrests and executions, murders continue:

“At that very time Paris was the scene of the most heinous atrocities; at that very time the diabolical inventiveness of hell was managing to come up with the easiest possible means of bringing them about.”

Louis XIV  “wishing to put a stop to this increasingly calamitous state of affairs, appointed a special tribunal” called the Chambre ardente with the “exclusive task of investigating and punishing these secret crimes.” The president of the tribunal, La Reynie in combination with Desgrais become feared men as the tribunal uncovers another nest of poisoners along with a long list of clients–some in the nobility.

Into this scene of fear and paranoia another series of crimes take place. The victims are wealthy men, commonly on their way to visit their mistresses and loaded with gifts of jewelry. Some of the victims are knocked senseless, but most are stabbed to death. It’s assumed that the murders must be the work of a brutal gang, but then one eyewitness account attributes almost supernatural powers to the robber, and “everyone’s head was filled with the sorcery, necromancy, and pacts with the devil.” There are no suspects and more guards are set on the street, but to no avail. Louis considers extending the powers of the tribunal which already resembles  “an inquisition,” but then Mademoiselle de Scuderi discourages the idea of granting the tribunal–and the people who run it–any further power.

And then late one night, a mysterious young man arrives at Mademoiselle de Scuderi’s house with a casket. Inside the casket are jewels and a letter purportedly from the gang of thieves called  ‘the invisibles’ thanking Mademoiselle de Scuderi for her friendship and for saving them from “persecution.” Mademoiselle de Scuderi is horrified to think that she is perceived to be a friend to these murderers and she refuses to wear the jewels which she considers cursed by blood. She confides in her friend, Madame de Maintenon who recognizes the exquisite jewellery to be the work of the idiosyncratic Parisian jeweller, Rene Cardillac.

Some months later, Mademoiselle becomes unwillingly dragged into the crimes, and she decides to seek the solution….

While Mademoiselle de Scuderi is interesting (and I do enjoy reading about this period), the novella was a little disappointing. This is basically a detective story–a point that Gilbert Adair makes in his foreword. Adair states that “there cannot exist a single history of literature in which the invention of the detective story is not attributed to Edgar Allan Poe for the Murders in the Rue Morgue, which was first published in 1841.”  Mademoiselle de Scuderi was first published in 1819, and Adair notes that its depiction of a serial killer makes this a seminal novel. Seminal novels to the genre are essential for research and for those determined to track down signposts over the centuries. Adair makes a good point when he compares Mademoiselle de Scuderi to Miss Marple, for instance. Perhaps there’s a thesis there for someone who wants to examine the development of the female amateur detective. But while some novels are perhaps ‘important’ it doesn’t mean that they are necessarily that great for the common-garden variety reader like me.

I found the peripheral/background details regarding the atmosphere in Paris the most interesting part of the story. Apart from that, the man responsible for the crimes isn’t particularly difficult to identify. Plus there’s a tepid romance thrown into the stew which serves to complicate matters in a rather silly way. The plot complication that one character stands in the way of revealing the murderer because he want to protect another is preposterous and flimsy at best, and at its worst, the novella pushes at the seams and becomes a bit of a cheap hysterical melodrama :

“Inwardly torn apart, alienated from all earthly life, Mlle de Scuderi had no more desire to live in a world of hellish delusion. She accused destiny for the bitter irony with which it had granted her so many years of life to reinforce her virtue and faithfulness, only to destroy, now that she was an old woman, the beautiful image that had shed its light on her whole life.”

I am sure that there are plenty of other people who love this story. I didn’t.