One of the reasons I began a book blog was to connect with other readers and get some fresh ideas. This recently paid off bigtime. 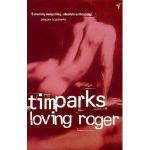 I was over at A Common Reader and read Tom’s review of a book by Tim Parks. I wasn’t interested in the book being reviewed, but I caught the author’s name, went to his website and liked what I saw. Then Max at Pechorin’s Journal mentioned that he’d read a few Parks novels and recommended a couple of titles. That takes me to Loving Roger, a nasty little novel built around the relationship between a working class girl and her middle-class boyfriend, Roger.

Loving Roger begins with an act of violence, and then the story tracks back over the events that led up to that point. The story is narrated by Anna, a pleasant, affable young woman who works as a typist in a London firm known as PP. The typical “office politics” are afoot: married boss and office Lothario, Mr G  looks on his female employees as part of a potential-mistress pool. He’s always engaged in an affair with one of the female employees much to the despair of Mr Buckley. Buckley worries about such things as professionalism and the vengeance of former typists-cum-personal assistants. The affairs provide the office with a great deal of gossip as they inevitably end badly. Here’s Anna in her matter-of-fact manner discussing Mr G up to his usual ways:

He liked to be generous and would tell Nadia, the girl on reception, to pop across the road for coffee and Danish pastries, so the switchboard would be blocked for five minutes and everybody upstairs would be nodding and winking and saying, oh no, Mr G was entertaining one of the secretaries again, and Mr Buckley would put on his weary professional’s look and grimace over the order-book. But the point was, of course, that Mr G couldn’t have his affairs outside the office because he spent his whole life in the company, and anyway, that was half the excitement of working for him. Everybody seemed to understand that perfectly, excepting Mr Buckley.

Anna is in a boring relationship with a young man who seems to be her parents’ pick of a future son-in-law when the arrival of new employee Roger radically changes Anna’s life. Roger, who’s a strikingly good-looking man, strikes up a relationship with wallflower Anna, and she begins to blossom from his attention. Even though it’s apparent that there’s something wrong with the relationship, Anna falls in love with Roger.

To Anna, a woman without complexities, life is simple, but the narcissistic, self-absorbed Roger, a would-be playwright who’s desperate to escape his middle-class background, constantly analyzes himself. He’s primarily an actor and the author of his own pathetic melodrama. These two characters are complete opposites, and their disastrous relationship is based on wild inequities. The peculiar thing is that Roger fuels these inequities in a sick-Of-Human-Bondage way.

Anna wants very little out of life, but Roger who’s always looking for drama and ‘meaning’ in his upwardly mobile life decides this means she’s stupid. In one great scene, Mr G asks Anna ‘what’s she living for’ and she unequivocably replies:

“But then I don’t see why you should have to know really–what you’re living for, I mean”–

The novel makes it clear that work has a way of fostering relationships that wouldn’t exist otherwise, and the book is at its funniest when depicting these forced relationships between different types and different statuses. It’s unfortunate that Roger suffers from such a superiority complex, and no doubt that’s why he feels, at least on some level, so comfortable with Anna–because after all, he can always find something to look down on. Here’s Roger berating Anna:

“You love an idea of me,” he said. “You don’t love me as I really am. You don’t love the me that’s struggling, fighting and adventurous. You don’t love a brave love. You want me as a failure, bled dry and white as a statue, posing traditionally by your side forever.”

This is a savage dark tale of a relationship based on how much someone can dole out and how much someone can take. Most women would take a hike after a few minutes in Roger’s company, but Anna doesn’t. Is this a story of so-called unconditional love or is this a case of Anna and Roger having a sick need for each other? Loving Roger examines the various facets of love: romance and the idealization of the love object which in this case morphs into unhealthy obsession & sick emotional dependency. Opposites may attract and in some instances perhaps even create balance in a relationship. In this case, opposites are disastrous.

Loving Roger is reminiscent of the best of Beryl Bainbridge (RIP Beryl), and that means the story is told with a great deal of sardonic black humour. Anna and Roger’s ‘romance’ plays out against the backdrop of the snippiness of office politics perfectly recreated in this slim novel.

This won’t be my last Tim Parks novel.