The Pale Horse by Boris Savinkov

“You simply have to spit at the whole world.”

It’s impossible to write about a novel by Boris Savinkov without talking about who he was. In Western culture, Savinkov’s name seems to have almost faded from view, but in the early twentieth century, he was known as the “General of Terror” and considered one of the most dangerous revolutionaries of the time. Born into a privileged family in 1879 Warsaw, Savinkov,  the son of a judge became a law student. He joined the Socialist-Revolutionary Party and within a short period of time, he led a combat unit responsible for the most spectacular assassinations of the time, including the assassination of Grand Duke Sergius.  His controller, although I doubt the word was used at the time, was Evno Azef, the head of the organization’s Central Committee. As it turns out, Azef was actually in the pay of the Okhrana, and so his dual role–organizing assassinations and revolutionary activity while also reporting back to the Imperial secret police makes him one of the most infamous agent-provocateurs in history.

Savinkov led a remarkable and curious life. Apart from his life as a terrorist, during WWI, prior to the Russian Revolution, he enlisted in the French Army as a private. Following the February Revolution, he made a number of alliances while fighting against the Bolsheviks (whom he hated with a passion), and he acted as Assistant War Minister under Kerensky in the Provisional government.  After the October Revolution, he continued to fight as a counter-revolutionary, and the Bolsheviks offered a large reward for his capture. Savinkov left Russia but was lured back in 1924 through letters from a friend. In reality the letters were most likely dictated by the GPU (secret police). Savinkov was arrested immediately upon his arrival in Minsk. After a brief trial he was sentenced to ten years and sent to prison. Savinkov never served his sentence. He ‘fell’ out of a window–an alleged suicide.

The translator of Savinkov’s memoirs, Joseph Shaplen (who believes the suicide story, btw), calls Savinkov a “strong individualist” and that he “believed himself the sole judge of his actions.” This attitude didn’t go down well with Savinkov’s comrades, his so-called ‘superiors’ and it eventually led to his expulsion from the Socialist-Revolutionary Party.

Savinkov was a shapeshifter of extraordinary talent, and under the pen name Ropshin, he also wrote a number of short stories, poems, a few novels, and his memoirs. The Pale Horse was called “The most Russian novel of the period” by Russian writer Dmitry Mereshkovsky while the Socialist Revolutionary Party considered Savinkov’s novels to be spoofs. It’s hard to pin down a man like Savinkov–he was determined to bring revolution to Russia through the destruction of the Romanovs, and yet he wasn’t too picky about who he aligned himself with to fight the Bolsheviks.

The Pale Horse, Savinkov’s first novel,  is written in the form of a journal–an account of a planned assassination.  It’s a thinly veiled account of Savinkov’s terrorist activities in 1905 pre-revolutionary Russia, although for the purposes of the novel, the target is a governor and the names are changed.  The tale is told by George, the leader of the combat unit, “a small group of five,”  –Fedor, Heinrich, and Vania, an idealistic and religious young poet, with the explosives manufactured by “chemistry expert,” Erna (a thinly disguised Dora Brilliant). The novel charts the persistent attempts to kill the governor and the lengths the group is prepared to go to to achieve their ends. We follow them through the planning, the tawdry gaiety of the Tivoli gardens, the disguises, the spies, the failed plots, the relocations and the clash of personalities over the question of just who is going to throw the first bomb. Even Azef appears as Andrei Petrovich–a man who thinks that the orders from the Central Committee mean something to George.

Since the events in the novel so closely follow events in Savinkov’s life, it’s almost impossible to untangle just where the fiction begins. George is a fascinatingly odd character who at times seems to eviscerate his belief system to reveal that it rests on exactly… nothing. He exploits Erna’s feelings for him, and engages in an affair that’s more about making a point than love or lust. His mild distaste for Erna is seen through frequent references to various body parts (her large hands, her red nose, for example), and yet at the same time there’s a hint of a vague, distant pity for this woman simply because she’s weak and doesn’t ‘get it’. George’s deepest feelings and his greatest arguments are reserved for the idealistic Vania. Vania, based on the real-life Kaliayev, struggles with the thou-shalt-not-kill part of Christianity even as he makes the moral choice to be a revolutionary. Rather surprisingly religious arguments, through Vania’s inner turmoil, take up a fair portion of the text, but George always has an answer. Here’s one of George’s nihilist statements:

I somehow could not believe in death. It seemed unnecessary and therefore impossible. I did not even feel joy or pride at the thought that I was dying for my cause. I felt strangely indifferent. I did not care to live, but did not care to die either. I did not question myself as to my past life, nor as to what there might be beyond the dark boundary. I remember I was much more concerned as to whether the rope would cut my neck, whether there would be pain in suffocation. And often in the evening, after the roll-call, when the drum ceased beating in the courtyard, I used to look intently at the yellow light of the lamp, standing on the prison table, among the bread-crumbs. I asked myself; Do I fear or not? And my answer was: I do not. I was not afraid – I was only indifferent.

And here he is debating his relationships with fellow revolutionary Erna, married lover, Elena, and humans in general:

People say that where there is no law there is no crime. If that is true, where is the wrong in my kissing Elena? And why am I to blame in not caring any longer for Erna? I ask myself this and I can find no answer.

If I acknowledged a law I probably would not kill; I would not have made love to Erna, and would not be seeking the love of Elena. But what is my law?

They also say: love your fellow-man. But suppose there is no love in my heart? They say: respect him. But suppose there is no respect for others in me? I am on the border of life and death. Words about sin mean nothing to me. I may say about myself: ‘I looked up and I saw the pale horse and the rider whose name is death.’ Wherever that horse stamps its feet there the grass withers; and where the grass withers there is no life and consequently no law. For Death recognises no law.

A fascinating read. While there’s a story here, the book is a treatise on revolutionary ethics and the primary question: Do the ends justify the means? Camus’ play The Just Assassins is another look at this question. Savinkov strikes me as more aligned philosphically to the revolutionary of the 1880s People’s Will, and I shortly confirmed this by reading an excerpt from his memoirs:

The Social-Democratic program had long ceased to satisfy me. It seemed to me that it failed to meet the demands of Russian life, particularly on the agrarian question. Moreover, on the question of terroristic struggle, I inclined to the traditions of the Narodnaya Volia (People’s Will). 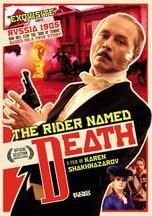 A word on my version. I bought a print on demand copy (the book is no longer in print). While I’m grateful to be able to read this at all, the typos were annoying. Apparently the publisher uses OCR software to reproduce the book, and since the technology is automatic, old texts will yield typos and missing texts.

Finally, The Pale Horse is available as an excellent film version called The Rider Named Death.

23 responses to “The Pale Horse by Boris Savinkov”