“There ought to be a law against women with sharp nails.” 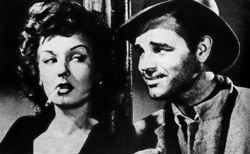 Recently I’ve decided to read the books behind some of my favourite classic noir films. The cheap, vicious B noir film Detour is a masterpiece and it makes my top noir list for many reasons, so reading the book was a priority. Director Edgar Ulmer apparently didn’t have a great opinion of the book. This made me curious. What did Ulmer see in it that inspired him? Was the book that bad?

Detour, and what a great, deceptively simple title this is for noir, was published in 1939. Author, playwright and screenwriter Martin M. Goldsmith (1913-1994) was born in New York City and left “via the thumb route.” He wrote his first book Double Jeopardy while living in Mexico, and by 1938, hoping to break into the film industry, he was in Hollywood working as a stage hand. He also wrote the screenplay for Detour, and the film was made in less than a week. There are some differences between the book and the film, and it’s to Goldsmith’s credit that he adapted the book so ably and meanly for the screen version.

The backdrop to the novel is the story of Alex Roth and Sue Harvey. Alex Roth was trained as a classical violinist and he’s already down on his luck when he begins playing in a New York club band. While working at the club, he meets one of the chorus girls, gorgeous Sue Harvey “one of the fifteen-dollar-a-week cuties,” and he loses his job after punching a customer for manhandling her. So he’s unemployed and things are looking grim for the wedding when Sue decides to leave & seek fame and fortune in Hollywood. Things became tough, very tough for Alex. He hocked his furniture, his work tux and his precious violin to join Sue on the West coast. He hitch-hiked his way across America, but his money ran out in Dallas, and hungry, he turned to theft. He was caught and sentenced to thirty days.

Those thirty days just delayed the trip west, and when the novel begins, Alex is hitchhiking somewhere in New Mexico. He’s desperate, cold and broke. Then it seems that his luck changes when a man called Haskell stops and offers Alex a ride straight through to LA. But since this is noir novel, we know that fate is just playing a cat-and-mouse game with Alex, and it’s not long before Haskell’s decision to give Alex a ride goes horribly wrong. At first Haskell seems to be the generous sort. He springs for a meal for Alex and then explains how, during his drive west, he met a vicious young woman named Vera. Over the course of a few hours, Alex discovers that Haskell, a bookie buried with gambling debts he cannot pay, is not a nice man at all. And then Alex runs into Vera….

If there’s any worse spot than for a man to find himself a slave to a woman’s whims I’d like to know about it. What makes it tough is you never can be sure what a woman will do. At one moment she’s calm and everything is velvet; then in a flash, it all explodes sky high and she’s got it in for you. And when she’s got it in for you, brother, look out. There are never any halfway measures. A woman loves or she hates. Pity and all the feelings in between she never heard of.

Now you men won’t believe this. You were brought up by your mothers to kiss the ladies’ hands, to watch your language in their company, to be gentle with them and to realize and appreciate how noble and soft and superior they are.

You were taught from the cradle that men are the hard ones, the roughnecks; and maybe sometimes you wonder why in god’s name women have anything to do with us, why they condescend to marry us, to live with us, much less to give in to us.

I used to wonder myself. But that was before all this happened. I can see now that like the lions and the spiders and the snakes, the female human is more vicious than the male. That must be the reason why nobody likes women on juries. If christ himself was being tried again, with Liebowitz defending him, you’d never know what verdict a jury of women would return. Yes, all women are dangerous–and this Vera was no exception. No siree, I should say she wasn’t. Vera was like a frozen stick of dynamite; you never knew when she was going to blow.

Detour is split between two narrators–Alex and Sue. For the first part of the novel, while I enjoyed the plot, I was not that impressed. The author’s style is nothing fancy, often mediocre, but then when I moved onto the second narrator, Sue, I knew I was reading something special. Goldsmith’s style–at least through Alex and Sue’s narration–is stripped of any true hard-boiled style or evocative descriptions. Instead we have two seemingly ordinary people telling their stories. We see Alex’s vision of Sue (on a pedestal) and then we read her vision of him, and one of the best aspects of this slim novella has to be Sue’s warped narration. She hasn’t found fame and fortune–she works nights at a hot dog stand on Melrose. She tells of a run-in with bit part, pretty boy actor who drives an “installment plan Cadillac,” and gradually we see another pathological mind at work. Yes! There’s not just one femme fatale at work here–there’s two!

The novel goes back and forth between Alex’s meeting with the vile man-hating Vera and Sue’s peculiar relationship with the bit part actor, Raoul. By the time I finished the novella (a mere 120 pages), I was impressed with the way the story grew on me. There’s something positively, claustrophically awful about both Vera and Sue–they’re like some sort of creepy, poisonous fungus. Detour explores the combative nature of male-female relationships that are loaded with traps, schemes, opportunities and manipulation. There’s the hunter and the prey–the victim and the predator, and those roles shift at times within this clever, subtle little story.

The premise of the film Detour is basically the same (and if you haven’t seen it, what are you waiting for?) but without Sue’s nasty view of things. I can’t fault the film or Goldsmith’s adaptation of the novel, but if you enjoyed the film then you may just want to check out the book.