The Duel by Heinrich von Kleist

Melville House came up with the brilliant idea of publishing 5 different novels–all called The Duel, and in spite of the fact they share the same title, they are vastly different in tone. There’s Casanova’s The Duel, Kuprin’s The Duel, Chekhov’s The Duel, and Conrad’s The Duel. Casanova’s duel is a Duel of Honour. Kuprin’s The Duel shows a society in disintegration. Chekhov’s The Duel shows the duel as farce–whereas Conrad’s The Duel shows two men pitted against each other for a lifetime while the original insult is mostly forgotten. This brings me to Heinrich von Kleist’s The Duel, a selection for German literature month cohosted by Caroline and Lizzy. Von Kleist (1777-1811) came from a Slav/Prussian family which produced 18 generals, and while Kleist was, at one point, a second lieutenant fighting the French in the Rhine campaigns, he ultimately rejected a military career. His short life came to an abrupt end when he shot his mistress, who was dying of cancer, and then he subsequently committed suicide. 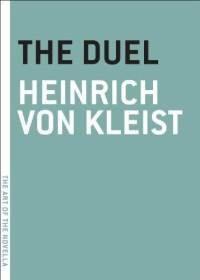 Kleist’s The Duel is completely different from the other 4 novels in the Melville House series. In this novella, we see the Judicial Duel, and essentially it’s a duel which is supposed to establish guilt/innocence depending on who wins the ‘trial by battle,’ and it’s an extension of the ‘judgement of god.’ Of course to us it’s all nonsense, but we can see the same sort of thinking or reliance on ‘divine intervention’  in medieval times in a process to identify witches. Suspected witches were thrown into rivers. If they sank & drowned, well they were innocent, but if they floated, they were guilty and the fun continued with burning at the stake.

It’s more-or-less this sort of thinking afoot in The Duel, and what a tawdry tale of lust, deceit, and greed this is. Kleist’s The Duel is my least favourite of the five as it’s short on character and heavy on fainting, chest beating and threats of penance, but that said, it was a must-read for me.

So here’s the plot:

Duke Wilhelm von Breysach is murdered by an unknown assassin when he returns home late one night. The timing of the murder is significant as the Emperor had just agreed to make his illegitimate son, Count Philip, his heir. Duke Wilhelm fathered the child before he married Katherine, so now she will act as regent until her son, Philip comes of age. Now here’s where it begins to get sticky…. The Duke’s half-brother, the dastardly Jakob Rotbart (great name) really has a claim to his late brother’s estate, but to everyone’s surprise, and somewhat against his nature, Rotbart acts graciously and endorses his nephew as the legitimate heir.

All seems well, but then Katherine begins to investigate her husband’s murder. The only evidence she has is the rather unique arrow that was pulled from his chest, and that arrow is traced back to Rotbart.

Since this is the 14th century, Katherine can’t have her brother-in-law arrested, so instead she appeals to the Emperor for help, but in the meantime, Rotbart begins to circulate some juicy rumours about his relationship with the widow, Littegarde, and he claims he has an alibi as he was in Littegarde’s boudoir when the Duke was murdered. The rumours spread like wildfire and Littegarde is widely held up to be a liar when she denies a sexual relationship with the Duke. The scene shifts from who killed the Duke to whether or not Littegarde is a floozy, and the Emperor sends word to Littegarde’s father that his daughter must “answer the charge brought against her by Count Jakob Rotbart.” Note that Littegarde is already supposed to “answer the charge” rather than provide an alibi for Rotbart. Littegarde’s father keels over dead at the news, and she’s kicked out of her home by her brothers and sent out penniless. But one man who’s always loved her, the chamberlain Friedrich von Trota believes her and fights a duel against Rotbart to prove Littegarde’s innocence.

Now if Friedrich loses the match, it’s assumed that Littegarde is guilty and is the secret mistress of Rotbart. But worse than that Littegarde and Friedrich will both be burned at the stake, and with options like that, you’re going to find out who your real friends are.  There will be no further recourse to law–the duel decides the guilt or innocence of the accused. Here’s Lady Helena, Friedrich’s mother:

“Fool,” his mother cried. “Do you not know there is a law by which a combat once, in the opinion of the judges, finished, may not, to dispute the same affair, be taken up again in the holy court of law?”

“What of it?” the chamberlain replied impatiently. “What are these arbitrary human laws to me? Can a combat not fought to the death of one of the combatants be on any rational appraisal of the matter considered finished? And might I, if I were permitted to resume it, not hope to undo the accident that befell me and achieve with my sword a divine verdict wholly other than what at present narrow-minded and shortsighted people take for it?”

“All the same,” his mother insisted, “these laws you say you do not care about are what governs and rules; reasonably or not, they enforce god’s ordinances and will deliver up you and her, as a criminal pair, an abomination, to the full severity of the judicial process.” (quote from Kleist, Selected Writings. Ed & translated by David Constantine)

Naturally any duel is a serious business–after all the participants have the potential to kill one another. But in this judicial duel, the outcome of combat will determine a third party’s innocence or guilt. On an entirely different note, I couldn’t help but be reminded of how both sides in a battle expect god to bless their endeavors. That’s always struck me as a bit odd–after all, both sides can’t win, and yet they send their appeal to win to the same source. In the judicial duel, we see this same sort of thinking, the victor being given the power of the righteous.

10 responses to “The Duel by Heinrich von Kleist”