Humiliated and Insulted by Dostoevsky

“There’s a peculiar gratification to be derived from the sudden tearing-down of a mask, from the cynicism of not deigning to betray any sense of shame in suddenly exposing oneself to another indecently.”

I wanted to read Dostoevsky’s novel Humiliated and Insulted after watching a Russian biopic television series about this incredible writer. Apparently this novel, first published in 1861 in the magazine Vermya, isn’t read much these days, and after finishing it, I can see why. The novel lacks the lively humour and craziness of Notes from Underground, and it also lacks the magnificent sense of impending doom found in Demons. In fact, I’d have to say that more than anything else, Humilated and Insulted reminded me of Dickens –a St Petersburg version, of course, but the Dickens influence seems present nonetheless. Dostoevsky was an admirer of Dickens and read David Copperfield and The Old Curiosity Shop during his time at a penal colony in Siberia.  Dostoevsky travelled to London in 1862 and there’s some speculation whether he met Dickens during his eight day stay in England.

But what of Humiliated and Insulted? This is a new translation by Ignat Avsey and this edition from Oneworld Classics comes with a number of pictures of the important people in the author’s life along with a couple of the book’s original illustrations. 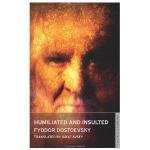 The novel is narrated by a writer, Vanya (Ivan Petrovich), and the story begins with Vanya looking for lodgings in the cheaper areas of St Petersburg. Needless to say the writer is very poor, but he’s also feeling ill when he spots a skinny old man followed by an equally skinny old dog. The writer is intrigued by the sight of such abject misery and follows the decrepit pair, dog and owner, into a coffee house. Later he follows the man into the street and witnesses his death. It seems fated that Vanya will rent the room now left unoccupied by the old man. There’s a great deal of mystery about the circumstances the old man lived in, but his death seems to be the end of the thread. It isn’t, of course.

The book starts off very strongly indeed with Vanya and the last mysterious words of the old man, and then we discover that Vanya is in love with Natasha (Natalya Nikolayevna) the only daughter of a minor landowner named Ikhmenev. Vanya, who was orphaned, was unofficially adopted by Ikhmenev, and so naturally Vanya and Natasha grew up with a close bond but they were separated when Vanya went off to boarding school. Since we’re told that Ikhmenev took in Vanya, we know that he’s a good man, but he’s also had a troubled past:

Nikolai Sergeich Ikhmenev came of a good family which had long since been reduced to poverty. However, after his parents’ death he came into possession of a sizeable piece of property with some hundred and fifty souls. At about the age of twenty he decided to enlist in the Hussars. Everything went well until one disastrous evening in the sixth year of his commission when he gambled away his whole fortune at cards. He didn’t sleep that night. The next evening he again turned up at the gaming table and staked his horse–his last possession–on one card. He won, then a second time, then a third, and half an hour later he had recouped one of his hamlets, Ikhmenevka, an estate which at the last census had numbered some fifty souls.

Apparently Ikhmenev knew to stop while he was ahead, so he resigned from the Hussars and retired to his small country estate. He never gambled again. Ikhmenev married a “dowryless” woman and carefully tended his estate. His reputation as an excellent manager grew to the extent that the visiting owner of the adjoining estate, Vasilevskoye “which numbered nine hundred souls,” a certain prince Pyotr Alexandrovich Valkovsky begins to cultivate a friendship with Ikhmenev and his wife. Although the Prince has a nasty reputation, Ikhmenev and his wife, Anna find him charming, and this is partly due to the fact that Valkovsky appears to single them out for attention. Then Valkovsky fires his German steward and offers the job to Ikhmenev, and he unfortunately accepts….

One of the book’s themes is the inability of good, honest people (the humiliated and insulted) to cope with truly evil characters, and this is apparent through several relationships in the book. Valkovsky is an evil man, and just how evil becomes apparent as the plot plays out.

Most of the plot gravitates around two situations: Vanya takes Nelly, a filthy epileptic orphan girl under his wing and saves her from being pimped to a pedophile, and part of the plot concerns the mystery of her background. Another huge chunk of the plot concerns Natasha, the daughter of Ikhmenev and her love affair with an emotionally immature nobleman, Alyosha.

Dostoevsky’s narrator has a problematic role. He’s a bystander for a huge chunk of the plot, and so he sees and relates the events that take place. There are many scenes of Vanya running over to see Natasha who’s in tears (again) thanks to the latest neglect from her lover. Then the lover appears and dashes off again only to disappear for another 4 days or so.  This cycle is repeated several times. A large chunk of the book appears to have very little forward motion as it hovers on Natasha’s stagnant love affair. Another fault can be found in the fact that Vanya is a bit slow to catch on to the true story behind the orphan’s mysterious past, and as a narrator, he isn’t particularly savvy.

But this is still Dostoevsky, and in my book, he’s untouchable. It’s not his best of course, but still well worth reading. One of the interesting aspects of the book is its look at sexual depravity:

There used to be a mentally sick clerk in Paris–he was confined to an asylum after he was finally pronounced unbalanced. Well then, during his bouts of madness this is how he used to amuse himself: he’d undress at home, stark-naked as the day he was born, down to his shoes, throw a large, ankle-length cloak over his shoulders, wrap himself up in it and, affecting a grand and self-important air, step out into the  street. To look at he was just like anyone else. A man in a large cloak strolling for his pleasure. But no sooner would he see some lone passer-by ahead with no one else about than he’d walk straight towards him, with the most serious and profound expression on his face, stop in front of him suddenly, fling his cloak open and expose himself in all his… glory. He’d stand for about a minute in silence, then cover himself up again and, keeping a straight face and with perfect composure, glide past the thunderstruck observer regally, like the ghost in Hamlet. He’d do that to everybody–men, women, children–and that’s all he needed to keep him happy.

While there are some shady and flawed characters, the Prince, who is unleashed in the final section, is the nastiest and also the most interesting character in the book. He’s a supreme pervie, and Dostoevsky’s frank approach to these sexual matters was refreshing for the 19th century:

Ideals I have none and have no wish to have any, never having missed them anyway. One can survive in this world so comfortably, so nicely without them…

The poverty and vice connection combined with the condemnation of a flawed social system that allows evils to thrive reminded me strongly of Dickens, and Dostoevsky’s novel also contains the sort of sentimentality found in Dickens through its two female victims, the orphan and Natasha. Here’s a speech made to Nelly  from a woman who sells children to wealthy pedophiles:

“Oh you damned bloodsucker, you louse, you!” The woman screamed, letting out an unpuncuated stream of abuse, gasping but not pausing for breath, “so this is how you repay me for all my care, you shaggy wretch! I send her off for some gherkins and off she sneaks! I knew it in my heart when I sent her she’d slope off. I felt it in me bones, I did! Last night I practically scalped her for it and today she’s up to the same old trick! Where’ve you been, you strumpet, where? Who could you go running to, you damned freak, you poisonous wretch, who? Tell me, you bog-trotting vermin, or I’ll strangle you on the spot!”

8 responses to “Humiliated and Insulted by Dostoevsky”