“Somebody had a seriously screwed-up upbringing.”

Last year I read and throughly enjoyed the hard-boiled crime novel, Kiss Her Goodbye, from authors Mickey Spillane and Max Allan Collins. Mickey Spillane is best remembered for his iconic bad-ass anti-hero, Mike Hammer (I, the Jury, My Gun is Quick), and when Spillane died in 2006, he left several unfinished manuscripts along with the instructions that they should go to his long-time friend, Max Allan Collins (The Road to Perdition). The good news for Hammer fans is that Max Allan Collins, Spillane’s natural successor, has put those manuscripts to good use, and as a result new work is surfacing: Kiss Her Goodbye, The Goliath Bone, Dead Street, The Consummata are all Spillane/Collins collaborations. Skin, a short story is the latest work to appear. Mickey Spillane apparently began the story in 2005, and chronologically it places Hammer in one of his last cases before retirement. It’s a slight work in comparison to the other, weighty novels in which violent action slams down hard on the heels of more violent action. Still for fans, Skin, which runs at round 41 pages, brings back Hammer, and I for one am always glad to see this character. Yes, he’s labeled with a lot of very PC-unfriendly words, but for this reader, he’s also a breath of fresh air. 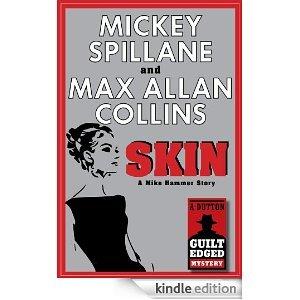 The story begins with Hammer and Pat Chamber, captain of Homicide staring at a mangled pile of flesh that looks like “roadkill” located just off the side of the road. This is Hammer’s grisly find, and it’s an incident which underscores the idea that Hammer is a trouble-magnet.  Along with the unidentifiable flesh is one intact hand, and that hand belongs to missing Broadway producer, Victor King.

The next morning around ten, I was sitting in the lavish living room of Victor King’s penthouse apartment on upper Fifth Avenue, with a view on Central Park. The furnishings were vintage art deco and what wasn’t white was black, and what wasn’t blond wood was chrome, and everything had curves. Including Mrs. King, who was also blond. As expected, she was a very lovely twenty-five or so; the stark red of her silk pajamas matched her finger-and toenails, jumping out at me  like the devil against the white of the couch, her legs crossed, a hand caressing a knee. Her mouth was similarly red, but her eyes were baby blue with blue eye shadow and a sleepy look, like a cheerleader on her third  beer after the big game.

I couldn’t imagine any man wanting to sleep with her, unless he was heterosexual and had a pulse.

So the grieving widow puts Hammer on retainer and he takes the case….

Since this is a short story, and an action-packed one at that, there isn’t much down time and the scenes seem to spin through at warped speed. Soon Hammer has a good idea of what kind of monster he’s hunting, and he delivers his own special Hammer-style justice which has very little to do with judges and courtrooms.

The gristly, hyper-violent Skin places Hammer close to retirement, and in this story, he clearly knows his physical limitations. He hasn’t changed, but he has aged, and so the story’s title has several meanings. Hammer still feels strong sexual attraction to women, but now he’s at the point that he’s not going to take the bait. Instead it’s all business, and Hammer doesn’t believe in leaving loose strings behind.

Review copy from the publisher.

17 responses to “Skin by Mickey Spillane and Max Allan Collins”