The Black Russian by Vladimir Alexandrov

I’m going to throw a question out there… Would you want your life to be defined by history? In my mind, the question is accompanied by images of Ulysses S. Grant,  Mannerheim, and Makhno–men who happened to be born at a crucial time in history and whose lives were swept up in war. But cast these images aside, and let’s start looking at something a little less famous, a lot less stature, and this brings me to The Black Russian, a non-fiction book by Vladimir Alexandrov–an incredible tale of how one man’s life was ripped apart by history and the dominant, brutal attitudes to race and class. 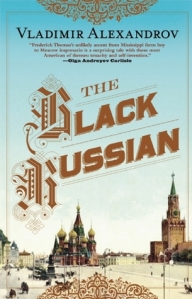 This book tells the remarkable story of the life of Frederick Bruce Thomas who was born in 1872 to former slaves who were farmers in Mississippi. Just looking at the date of the date of Frederick’s birth tells us that he was born to a whole new Southern world, but a society that was still in a great deal of post-Civil War turmoil. Frederick’s parents must have been remarkable people as they managed to amass, at one point, 625 acres of land which they successfully farmed. But their very prosperity led to a powerful local, white landowner tricking them out of their land with a “multilayered trap” which included false threats and manufactured debts. Basically run off their land penniless, Frederick’s family fought back seeking legal redress, but after Frederick’s father was brutally murdered, the family sank into poverty once again.

Frederick set out in the world on his own and always seemed to make very concise intelligent decisions, and even though the choices he could make in his work world were very limited due to his race, nonetheless, a clear pattern emerges which “prefigures his future life and career.” Frederick quickly attached himself to those who could afford luxuries. He didn’t get stuck working in a back water dump of motel but always lived in large cities which attracted the wealthy who had money to spend.

he [had] entered an elegant service industry, one that existed for the benefit of people with money and social standing. No matter how lowly or demanding Frederick’s own labours might have been, he was nevertheless involved in providing adornments for those who could afford to pay for such luxuries.

Frederick worked as a waiter, but again, only in the most expensive restaurants and then after a successful career in Chicago and New York, in 1894, he sailed for London. Unfortunately, we don’t know what Frederick thought of England, but there are many quotes included from white Americans visiting London during the same time period who expressed a range of views–some outraged and some delighted–at the way “American negro[s]” “can go into the finest restaurants and be served just like a white man.” Frederick ran a boarding house in Leicester Square but it was a short lived endeavor, and then off to Paris where he worked for a few years and quickly learned French. But he was still restless and moved onto Brussels and the Riviera. It’s as though he auditioned countries to find his next home, and then, rather surprisingly, he finally settled in Moscow, married, started a family, and became one of the most successful variety theatre & restaurant owners in Russia. His theatres attracted the curious and those with money to throw away, and in one of his establishments, Maxim’s, he introduced the “theme space” which appears to foreshadow the outrageous hotels of Vegas.  With Frederick as an affluent millionaire, bribing local officials to look the other way for the risqué acts he searched the globe for, this should have ended as a happy story, but 1917 rolled around and a penniless 47-year-old Frederick, with his second wife and children found himself fleeing from the Bolsheviks and boarding a ship in 1919 full of American refugees. Good thing the American consul had no idea that Frederick had become a Russian citizen in 1915 under special dispensation from the Czar.

The Black Russian tells a tale of courage, ingenuity, dizzying success, flight, and then disaster. Frederick’s incredible life was bookended by racism and class-hatred, and what a tragic roller-coaster ride. He fled a country in which his class held him to the lowest, domestic positions, then, with his own unique talent and nose for business, he reinvented himself and was a phenomenal success in Russia, of all places, only to have it ripped from him by the Bolsheviks who saw him primarily as upper class and not as a black man who’d succeeded against the odds. This is one of those stories that if it were fiction, the average reader who toss aside after a few chapters thinking that the story was too implausible.  The Black Russian begins as  a gripping adventure story as Frederick’s family flees a panic-stricken Odessa, and then the book segues back into Frederick’s beginnings, his search for success, his dramatic failures in Constantinople and his ignominious end. The book also provides a backdrop of the society of the times, and while this is, at times, essential, the information is sometimes anticlimactic when compared to the main story.

At the peak of his success, Frederick was worth “about $10 million in today’s currency.”  While The Black Russian is the tale of one man’s rise and fall, the book also shows that Frederick, once liberated from the racial attitudes that held him to menial domestic positions in America, soared in a society in which his colour was no impediment. Intelligent, forward-thinking and unleashed in a country in which his colour was not an issue, Frederick showed just how successful he could be. It’s impossible not to read his story and consider how Frederick’s life would have been contained and limited if he’d stayed in America. Not only do we see  Frederick’s intelligence and strategic planning, we also see his sense of humor and how he loved to play with the American tourists who came his way, acting out–somewhat outrageously–their lowest expectations of a “semiliterate” subservient American black domestic–even though quite obviously diamond-flashing Frederick did not fit their stereotypical racist ideas and was, in fact, at the height of his success, a cosmopolitan figure, a successful, worldly millionaire who carved a fortune with his intelligence and adaptability.

8 responses to “The Black Russian by Vladimir Alexandrov”