Everything and More by Geoff Nicholson

Another entry in my Year of Geoff Nicholson project, and this time it’s Everything and More–a Nicholson novel I loved for its originality and sheer compressed scope–you’ll see what I mean later. The novel, with a few minor exceptions, is set inside Haden Brothers, a vast, seemingly endless London department store (“including 12 different eateries,“) designed as a replica of Brueghel’s Tower of Babel & built in the 1930s by “maverick visionary” Edward Zander, the architect who mysteriously disappeared once the project was completed.

However, Zander’s building has few of the rhythms, repetitions or classical form of its supposed model. Rather it suggests a series of multiple codings, elements of Russian Constructivism, Italian Renaissance and stuccoed Baroque. It is decked, as though at random, with crenellated parapets, pantile roofs, ogee arches, steel balconies, oriel windows and flying buttresses. Carved into the fabric of the building are angels, putti and mythological beasts. There are gargoyles, caryatids, mosaics, expanses of Moorish tiling and some magnificent stained glass. Zander had envisioned a menagerie on the ninth floor and wanted the whole building to be painted blood red, but he was talked out of these schemes.

This story is the perfect vehicle for Nicholson’s frequent themes of collection and obsession, for after all, doesn’t shopping encompass both of these neurotic pastimes? And what better place for the compulsive shopper to hang out than Haden Brothers–the 400 department emporium that boasts that it sells “everything and more,” where shopping is an experience rather than a mundane activity. 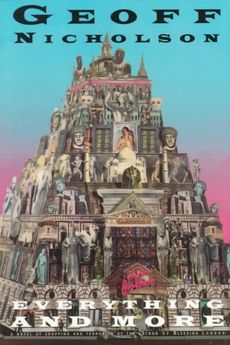 Enter two job seekers: Vita Carlisle and would-be artist Charlie Mayhew. Charlie applies for a job because he’s an unwelcome guest sleeping on the sofa of the only friend who’s still talking to him. Vita has a boarding school & university background along with an impressive resume, and while her determination to work at Haden Brothers seems a little odd, her professionalism and apparent fanaticism about the workings of the sprawling shopping metropolis really can’t be faulted or penetrated. Vita could obviously do a lot better than Haden Brothers, but she insists that she’s in love with the place and working there is her dream. Both Charlie and Vita are employed on the spot by Derek Snell, who’s officially head of personnel and unofficially, the pimp for the reclusive owner of Haden Brothers, Arnold, the last of the line. Arnold lives in the penthouse suite, accessible by a private lift, on the very top of the Haden Brothers building, and he hasn’t stepped into the outside world for years. Derek Snell, a rather sleazy character, has an eye for the sort of women his boss prefers, and since he is, in essence, the pimp for the king of Haden Brothers, he has a position of some power:

Derek Snell was no fashion victim, or at least he had been victimized in about 1975 and had never entirely recovered. He wore a brown Viyella suit with wide lapels and deep turn-ups, a chunky knitted wool tie, a shirt with a flapping collar and a pattern of tiny veteran car motifs. He was a toothy, slim-chinned man, about forty-five with a lot of gingery hair that curled round his head like a tarnished halo.

Vita becomes part of the so-called Flying Squad–a sort of troubleshooter, and here she is in the toy department with “raw, lean, adrenalin-driven, toy buyer,” Carl:

On Vita’s first day in the department he took her aside and told her, ‘We sell a lot of merchandise here on the basis that we’re educating the little fucks, stimulating their imaginations, fostering hand-eye coordination, that kind of crap. The truth is, what we’re struggling to do here is sedate and socialize a generation of would-be Adolf Hitlers.’

Vita looked at him uncertainly but still managed a smile.

‘The thing to remember is this,’ Laughton continued, ‘all children are thugs, fascists and megalomaniacs. There was a time when they wanted scaled-down versions of the real world; toy animals, toy soldiers, dolls, building blocks to make miniature cities. Then they pulled the eyes out of the animals, tore the dolls limb from limb, massacred the soldiers, razed the cities.

‘These days, they play with computer games, and they can play at destroying whole life forms, whole planets and galaxies. They take to it like ducks to water. It all comes perfectly naturally to them. And they genuinely believe that when they grow up they’ll be able to do all this stuff for real. But when they do grow up they discover, with one or two important exceptions, that they don’t get to blow things up at all, and that really hurts them. It’s a discovery nobody ever quite recovers from. I know I haven’t.

‘That’s why toys are so attractive to adults, why they carry so much nostalgia with them, because they remind us of a time when we were power-mad, conscienceless dictators.’

While Vita moves from department to department as part of the elite Flying Squad, poor Charlie becomes a furniture porter. The subliminal messages piped out over the sound system geared to make shoppers and employees alike behave don’t seem to work on the porters who take the example of their subversive leader, Anton, and spend most of their time devising elaborate ways of not working. This means hiding when there’s work to be done, spending hours quibbling over payroll deductions in the accounting office and engaging in “extravagant pilfering.” What’s so interesting is that Vita is involved in the day-to-day activities of ensuring that Haden Brothers runs smoothly, while Charlie becomes snared in the subversive shadow life of Haden Brothers, the bomb threats, the mysterious graffiti that appears periodically on the shop’s windows, the hidden, fully operating miniature railway, and the secret passages down deep in the basement. Only the Head of Security, Ray Chalmers seems to recognize that there are elements undermining the efficient day-to-day operations of the huge department store, and since everyone connected with Haden Brothers seems to lose all sense of proportion, Chalmers declares war on the subversives:

I’m not trying to say that it’s like Vietnam out there, but in a sense it is. It’s a jungle. The enemy’s hard to spot. The terrain is difficult and we don’t always get the backing we need. There are goons. There are traitors and double agents. There are men from our side who’ve abandoned discipline and gone native. At least in Nam they were allowed to use defoliant, napalm, cluster bombing. I wish we could do that at Haden  Brothers. That would shake the buggers up, flush them out so they could be punished with loads of prejudice.

The newest furniture porter seems like a suspicious character to Chalmers. After all, what’s his first name?

Initially Charlie isn’t thrilled with his job, but over time he becomes entranced with the fabulous exotic extravagance of the building as he begins to note “strange faces and African masks carved into the woodwork, wrought iron archways with swastikas and pentagrams, staircase finials that looked like simple spheres but turned out to be intricately carved globes of the world.”

While on the surface, Haden Brothers is a monument to shopping and materialism, there’s a lot of peculiar goings on, and Charlie begins to be aware of just what some of those peculiarities are even as the unfathomable Vita becomes increasingly involved in the surface management.  One of my favourite scenes takes place when a customer lodges a complaint and is summarily whisked off to a seductive paradise hidden away in the secret corners of Haden Brothers. And here, in exotic hypnotic luxury, the half-dazed customer, is grilled:

He wanted to be cooperative  but he was too entranced by the room in which he now found himself. The carp pool was undoubtedly the most imposing and unexpected feature, but then he had not been expecting the Persian tapestries either, not the ornamental fountain, not the parakeets on their perches, not the bejeweled mirrors and tables and fireplace, not the ornately carved golden couches on to one of which he was now being guided. It was impossible to sit on these with any degree of formality and he found himself lying back, reclining like some Roman hero.

5 responses to “Everything and More by Geoff Nicholson”