How much is one man worth? What price a human life? To know what one is worth is like knowing the date of one’s death. I’m worth twenty million dollars. It’s a lot. But much less than I thought. I must be one of the most expensive men in the world. To be so valuable and to live a life as shitty as mine–that’s the worst misery. If I had that twenty million dollars, I know what I’d do with it. I’d give the whole thing away in exchange for going back to my previous life, before I was worth that much. The man who blows my head off, what will he do with the money? He’ll put it in property and go off to hang out in Barbados for the rest of his life. They all do that.

These are the thoughts running through the head of former top mafia figure, hitman turned informer for the government, Giovanni Manzoni, now Frederick Blake living with his wife Maggie (Livia) and two children 17-year-old Belle and 14-year-old Warren. Under the watchful eyes of the Witness Protection Programme, they’ve been living in France for 5 years. They’ve had several moves and now they’ve washed up in Normandy, along with their dog Malavita, in the small town of Cholong-sur Avre. The family must integrate and not draw too much attention to themselves–after all Giovanni was a top government witness in a case that busted the Mafia wide open and generated long prison sentences for some very pissed off men. The FBI team members who babysit the family know that the Mafia back in New Jersey have not forgotten Giovanni, and if he’s ever found, he’s a dead man. 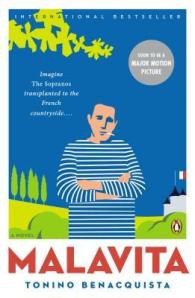 The attempts to blend in with the locals by the four family members are really very funny, and the best part of the book. There’s Frederick, who’s become depressed since the trial, and who spends his days unshaven and “trailing around in his slippers all day,”  feeling useless. After finding an old typewriter, “obsessed with the idea of telling his version of the truth,”  he decides to write his memoirs–something of course the FBI isn’t too happy about, and his new profession as a writer, gives him the perfect excuse to lounge around on the balcony all day and reminisce about the good old days. Meanwhile Maggie/Livia also think of the good old days when she was a top Mafia wife, “dizzy” with power and feeling like “the First lady of the whole area,”  a woman who could get whatever she wanted with a snap of her fingers. Now she’s decided to do penance by throwing herself into charity and volunteer work.

As for the children, well they speak excellent French. Belle has grown into a beautiful young girl who’s not as vulnerable and naïve as some of her schoolmates think, and Warren’s ambition is to become the godfather of his school–a lofty goal he achieves within days of arriving. An admirer and student of Capone and Lucky Luciano, Warren’s motto is “Give them what they need the most.”

It was just a question of time and organization. In order to achieve synergy and increase complementarity, all he needed to do was to know how to listen, discover each person’s limits, spot the gaps in their lives, and decide how much to charge for filling them. The more solid the base he could build up, the quicker he would rise to power. The pyramid would build itself and raise him to the stars.

Some of the book’s humour comes from the culture clash generated from Americans living in France, but of course, these are not ordinary Americans–this is a crass, violent and dangerous Mafia family who don’t take ill-treatment and insults well. One incident occurs when Maggie asks for peanut butter in the local shop and then overhears the shop owner bitching about Americans to some locals:

“I’ve got nothing against them, but they certainly make themselves at home wherever they are.”

“Of course, there were the landings. But we’ve been invaded ever since!”

“In our day, and for our generation, it was nylon stockings and chewing gum, but what about our children?”

“Mine dresses like them. Enjoys the same things, listens to the same music.”

“The worst thing is the food they eat. I cook something they like, and all they can think of is to leave the table as quick as they can and rush off to McDonalds.”

Maggie is “hurt” by the exchange, but what happens next illustrates how the family won’t take insults lightly. We see each family member attempting to integrate with mixed results: an opportunistic plumber finds that his usual sales pitch doesn’t work, and a BBQ (in which the typical American menu of steak, steak or steak is discussed) for some of the locals almost ends in violence. The emphasis is on humour–with the locals oblivious about exactly what they’re dealing with, and Giovanni/Frederick using all his willpower not to exact vengeance against those who insult his BBQ skills. These scenes are all very funny, but some of the other humour, when stone-cold killer Fred, who’s slotted into the life of a harmless writer, imagines his past crimes grates uncomfortably with the humour.

I’d been meaning to read Malavita (aka Badfellas) for some time, and the knowledge that the book’s been made into the Luc Besson  film The Family made picking up the book mandatory. After reading the book, however, I’m not sure that the film will ‘work’ quite as well as the book, but I’ll try it anyway. The book’s alternate title: Badfellas refers to the film Goodfellas, and there’s one wonderful scene in the book when Frederick attends a film night and provides commentary on Goodfellas.

Fred knew the film almost by heart, and he hated it for a thousand reasons. In it gangsters were reduced to what they really were: scum, whose only aim in life was to park in forbidden places, give the biggest fur coat to their wife and, above all, never have to live the lives of those millions of idiots who get up each morning to earn a miserable crust, instead of sleeping in a gold-plated bed. That was all a Mafioso was, and Goodfellas told it like it was. Without the myth, all that was left was stupidity and cruelty.

11 responses to “Malavita by Tonino Benacquista”