My Face For the World to See by Alfred Hayes

For its bleakness and its Hollywood setting, I loved My Face For the World To See (1958)–a dark tale of a tangled relationship between a married screenwriter and a very damaged would-be actress. At 131 pages, this New York Review Books release doesn’t waste words, and there’s the sense that this tale has been pared down to perfection. The story flings us right into the drama with an opening set at a beach house party with various Hollywood people in attendance. The screenwriter, who remains nameless throughout the story is bored and feeling alienated when he goes outside and spots a woman stepping into the ocean. He thinks he’s seen the girl before, but then again perhaps not. She looks, after all, like so many other pretty, leggy desperate young women who drift to Hollywood. He realizes that she is trying to commit suicide, so he pulls her out of the ocean, and the drama begins. 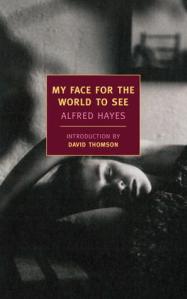 The screenwriter, who’s in his late thirties, is well paid but not particularly happy. His wife of fifteen years, a woman he’s no longer attracted to, lives in New York with their child. He rents an apartment that’s a “little too bridal,” and has the occasional affair. He’s not a wolf by any means or a predator, but he’s used to being alone with his cynicism:

I thought of my wife. She was at a distance. The distance was in itself beneficial. I supposed I was being again uncharitable. She was what she was: I was what I was. That, when you came down to it, was the most intolerable thing of all. If only she weren’t, now and then what she was, always. If she’d let up a little or knock it off a little or hang it out for a good airing once in a little while.  God, marriage. No: it wasn’t marriage. There wasn’t, even on close examination, any other available institution, any other available institution you could substitute. There seemed to be nothing but marriage, when you thought of it, and when you thought of it, my god, was that all there was? That, and raising a family. That, and earning a living. That, and calling the undertaker.

This bleakly abbreviated view of the meaningless of life says a great deal about our narrator. He finds his tired marriage, strained by “something that resembled a truce,” suffocating; perhaps he married too young, and he has yet to find anything to substitute for any sort of meaning to his existence. Yet his attitude towards life extends beyond his marriage, and he hates New York, “that immense slum.” Hollywood isn’t much better as far as the screenwriter is concerned. He dislikes Hollywood and the money it generates. To him the town is “rotten” and its immense wealth has a “phantasmal quality.” In a town driven by money, power, and fame, all three leave him cold.

At this very moment, the town was full of people lying in bed thinking with an intense, an inexhaustible, an almost raging passion of becoming famous, and even more famous if they were; or of becoming wealthy if they weren’t already wealthy , or wealthier if they were; or powerful if they weren’t powerful now, and more powerful if they already were. There were times when the intensity with which they wanted these things impressed me. There was even, at times, a certain legitimacy to their desires. But it seemed to me, or at least it had seemed to me in the few years I had been coming and going from this town, there was something finally ludicrous, finally unimpressive about even the people who had all the things so coveted by all the people who did not have them. It was difficult to say why. It might have been only a private blindness, a private indifference which prevented me from seeing how gratifying the possession of power or the possession of fame could be.

The meeting between the screenwriter and the young woman grows into a relationship. The woman lives in spartan circumstances, but she’s proud of what she’s accomplished while the screenwriter finds that he’s “wandered into a ‘unsuccessful’ life again.”  He senses that “something quite heavy, quite immovable, weighed her down.” When questioned, he’s frank about his marital status, and an affair begins–with the young woman accepting that what they have is a dead-end with no future. Not a great deal happens during the course of the affair–a few dinners, a disastrous trip to Mexico, and, of course, confidences, which include the woman’s troubled past, are exchanged.

Author Alfred Hayes chose to keep his two characters nameless–although there’s one point in which the woman refers to herself as Miss V. It’s much more difficult to write about a book in which the main characters are nameless, but what’s interesting here is that the lack of names adds to the general feeling of anonymity. These people live in Hollywood–a town, “true to its rhinestone self,” in which names are of paramount importance. The last thing anyone connected to the movie biz seeks is anonymity, but that’s exactly what these two characters have. The woman, of course, seeks fame–she wants to hit the Big Time with “my face for the world to see,” whereas the man doesn’t care for any of the usual gilt covered carrots that drive ambition in Hollywood. Then there’s the issue of the affair….  Why, oh why, would anyone be insane enough to get mixed up with this emotionally damaged woman? Yes, she’s attractive and available, but as the narrator points out, the town in swamped with beautiful, attractive women eager to make connections and more than happy to attend Hollywood parties. The screenwriter’s introduction to the young woman, her suicide attempt, should tell him all he needs to know. This is not a stable young woman, and an affair can only end in disaster for both of them. Why then, given the benefit of all the warning signals, does he take the green light and begin an affair? Vulnerability can be a weapon, and it can also be a magnet.

In Love is the story of two people in a relationship that sours even as it goes nowhere. My Face For the World To See, the finer book of the two, is the story of a relationship that goes to hell. Alfred Hayes has a self-interruptive style which is only occasionally apparent in My Face For the World to See whereas this style is pervasive in its repetitive uncertainty in In Love. This is a sparsely, beautifully written tale of damaged souls, with sentences that lap over our senses and recede slowly, leaving behind an emotional stain:

There was a noisy rush of water from the bathroom, and she appeared, ready for the evening, a smile she had chosen, I thought, from a small collection of smiles she kept for occasions like this, fixed upon her face.

Praise goes once more to New York Review Books for resurrecting a lost gem. How do they find their titles?