Another entry in The Year (and a bit) of Geoff Nicholson. This time it’s Female Ruins–also known as the author’s “architecture novel.” I already knew, from Everything and More, that Nicholson had a fascination with buildings, and then there’s his blog of course. But in Female Ruins, Nicholson gets to the heart of the matter with “The Architecture of Impermanence.”

Kelly Howell leads a marginal life working as an under-employed cab driver in the small Suffolk town of Carsham. She receives a call, in the middle of the night, from an American tourist who claims he’s stranded at the train station and needs a taxi to get to his hotel. With expensive luggage and a fancy cane for a damaged leg, Jack Dexter says he’s off-the-beaten-track for a little tourism, and he hires Kelly to be his driver and guide for his two-week holiday. Reluctantly, Kelly agrees–although she’s not particularly comfortable with the arrangement which entails, for one thing, a relationship of sorts, and Kelly, who prefers drunken one-night-stands to soulful exchanges, would rather not have a relationship of any kind whatsoever. Hence the taxi cab job: she can work when she wants and there are no strings attached. 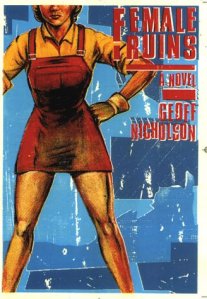 We could call Kelly anti-social–it’s a label that fits this young woman who’s never quite recovered from the life and death of her famous father, Christopher Howell, an enigma, a cult figure of sorts, the “greatest modern English architect never to have built a building” who wrote three books: Watch it Come Up, Buckminster Fuller’s Bedspread, and The Ruins of Pleasure. Kelly’s father died when she was 13, and she remembers that “he seemed desperate to create buildings, real buildings, not just flights of fancy,” but then just how well did she really know the man who was “up and gone” before Kelly’s birth?  Over the years, the stories about the “(disputed) genius” of  “speculative architecture,” and Christopher Howell have become more elaborate, and it’s impossible to pick apart the truth from the myth. His drawings were unique and varied and included “pyramid-shaped buildings, some on stilts, some resting on the ground, or on water, some just floating in space.”

The story was that her father never found a patron, indulgent or otherwise, and since he couldn’t make his ideas concrete, he’d decided to make them as abstract as possible. He became a sort of architectural philosopher, a propagator of ‘speculative architecture’, a genius figure to some, almost a guru to one or two.

Some of the people who appreciated her father’s work said that the impracticality of his ideas, the essential unbuildableness of his buildings, was the whole point. Their beauty, they said, lay in their impracticality, their lavishness, their irony. Some just said they were works of art, poetic inventions. Kelly was very happy with this view.

Other critics said that, even though he’d done his training at the Architectural Association, her father had never really intended or wanted to be an architect. They said his self-assigned role was to act as a sort of philosophical whetstone, someone against whom students and scholars, and even architects, could hone themselves and their ideas, thereby becoming sharper and more cutting edge.

Kelly is still firmly under her father’s shadow, and while she has no aspirations to continue in his footsteps, neither can she decide exactly who she is or what she should do with her life. In some ways, Kelly’s life seems suspended and with a “string of ruined boyfriends,” she’s unable to move forward. She is, in fact, a bit of a female ruin.

Female Ruins is initially structured around Kelly and Dexter’s day trips to various tourist spots. Naturally architecture is rooted in all their sightseeing trips, so they visit some lesser known sites including a church in Dunstan, The House in the Clouds at Thorpeness, ruins at Monkwich, and even a miniature golf course. The trips are interposed with excerpts from essays written by Christopher Howell, which include hints of an unknown life. In one essay, Christopher discusses the destructive urges of  Puritan William Dowsing, and Howell imagines unleashing this destruction on “every cosy English domestic interior.” Another essay discusses “ergotopoeic buildings,“–a style of structure that “reveals its meaning by its look.” One such example is Christopher’s assertion that nuclear power stations should be built “in the shape of giant mushroom clouds.” And here’s an quote from the essay Motel America in which, amongst other things, Christopher discusses Bates Motel & more importantly the philosophy behind the architecture of motels:

As far back as the 1940s, in a more or less deranged article that J. Edgar Hoover wrote for a magazine called the American Nation, he claimed that motels were places where criminals hung out, where illicit sex was freely available and where it was easy to buy drugs. The simple response to this is ‘only if you’re lucky’. But in motels you do have a tendency to get lucky.

I, needless to say, think it has something to do with the moral dimensions of architecture. The best motel architecture looks not merely playful but actually trivial, as though to say this place is unreal, what you get up to here in this fun house doesn’t really count, it’s outside your real life. You won’t be held responsible for what happens here. And so you’re free to have illicit sex, to take drugs, to consume beer and potato crisps in bed, to watch mind-numbing television. You are free to behave like a sleaze.

A couple of superb scenes capture Kelly’s relationship with her mother, a woman whose house is a monument to  “mundanity” which is in total contrast to the “grotty little bedsit” Christopher Howell lived in, in Kennington. The walls were white, and Kelly’s father said he saw them as a “blank canvas.”

He told her he’d started to doodle on the wall beside the bed, a doodle he’d immediately seen as a sort of road map showing a long broad thoroughfare with many junctions and side streets. But then the doodle began to have a life of its own. That first main street led to other roads, to roundabouts, dual carriageways, motorway flyovers and tunnels, and he’d drawn all these in. This had led to the creation of rivers, railways, canals. The map had spread from one wall to two, to three, to four, and it had risen up the ceiling where the separate wall maps had converged around the ceiling rose. From certain angles it resembled an elaborate spider’s web.

He hadn’t drawn every single building in detail but he’d sketched in symbols that might be looked at as strange ground plans: a cinema shaped like a movie camera, a school in the shape of a saxophone, a swimming pool shaped like a brain, a drive-in restaurant in the shape of a coffin. Her father’s tastes did not run to the whimsical and although he had created an imaginary kingdom, there was nothing fey or childlike about it. There was a suicide bridge, and an area of space called ‘Killing Fields.’

Then there were some dark jokes: nuclear reactors positioned next to hospitals, prison for sex offenders that overlooked girls’ schools. There were housing developments that encircled toxic waste sites.

Was Christopher a fraud or an untapped genius ahead of his time? This question gnaws at Kelly, but unfortunately she will never know the answer. Or will she? What if her father did build some incredible building? Would it fulfill Kelly’s expectations or would it be a disappointment?

Female Ruins has an implied underlying poignancy that is absent for Nicholson’s other novels. Yes, this is yet again a story of obsession–a story of the destruction of one man who pursued perfection beyond the practical, but it is also the story of a daughter’s obsession with her father.  Growing up with the myth and unable to shake it out of her head, unresolved daddy issues have left Kelly, a tough, independent character. Nonetheless, she’s a ‘female ruin’ damaged by her father’s absence, underemployed and unable to sustain a meaningful relationship. Will the truth, whatever that is, about her father, liberate Kelly from the chains of memory? Fathers occupy mythological status in the lives of daughters and the toppling of those monumental assumptions doesn’t necessarily solve anything.

Those interested in architecture will pick up more from the novel than I did. There are references to Frank Lloyd Wright and the novel also tips its hat to Ayn Rand’s The Fountainhead. Geoff Nicholson seems very comfortable with the subject matter, but then again, he’s a polymath who creates intensely intelligent novels disguised with humour.