The Lonely Passion of Judith Hearne by Brian Moore

I have a soft spot for novels set in boarding houses. Perhaps it’s the interesting possibilities of a houseful of people connected only by the fact they pay rent to the owner of the home. The residents have no shared ground of tastes or interests, apart from a desire for consideration, quiet and cleanliness as so wonderfully conveyed in Russell Hoban’s Turtle Diary. This sort of social and economic arrangement is in decline, while ‘group homes’ seem to be in proliferation. Here in America, I see once beautiful Victorian mansions, in the shabbier areas of town, broken down into rooms for rent in “rooming houses.” Zoning rules effectively limit rooming houses, and these days rooming houses have an unsavoury reputation. For the purposes of Brian Moore’s novel, The Lonely Passion of Judith Hearne, boarding houses are still a decent, respectable way of life for single people who live in modest circumstances, and who desire a safe, clean, quiet place to live. 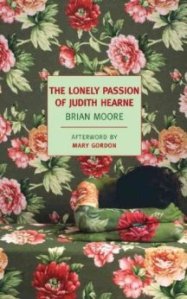 This particular shabby Belfast boarding house is owned and run by Mrs. Henry Rice, a middle-aged widow. She’s on the nosy side when it comes to her lodgers, and she’s also cheap when it comes to the provided breakfast which consists of tea and toast–with the exception of Sundays, when there’s a fried kipper for each lodger. The morning breakfast ceremony ensures some sort of communication, gives the aura of genteel respectability to the arrangement, reinforces Mrs. Rice’s authority while allowing her to keep an eye on her tenants and lends pretense to the idea that these are guests and not simply unconnected strangers in a boarding house. Breakfast times reveal the drab, parsimonious lives of the boarders, and in one wonderful scene, Mrs. Rice’s lay-about, would-be-poet son, Bernard, is fed bacon, eggs and fried bread while the lodgers sit there, disgruntled, with their toast and tea.

When the novel opens, a new tenant is moving in. It’s Miss Judith Hearne, a spinster in her 40s, who teaches piano for a living. There’s the impression that this latest move is one in a series in a life that’s in descent:

The first thing Miss Judith Hearne unpacked in her new lodging was the silver-framed photograph of her aunt. The place for her aunt, ever since the sad day of the funeral, was on the mantel piece of whatever bed-sitting-room Miss Hearne happened to be living in. And as she put her up now, the photograph eyes were stern and questioning, sharing Miss Hearne’s own misgivings about the condition of the bed-springs, the shabbiness of the furniture and the run-down part of Belfast in which the room was situated.

The Lonely Passion of Judith Hearne is an exploration of loneliness, hypocrisy, the human capacity for self-destruction, and the role of religion as compensation in a life that’s less than satisfactory. Judith Hearne has been able to ply the holes in her life with religion, but this is becoming more difficult. She spent her life devoted to nursing controlling, battle-axe Aunt D’Arcy, now dead. Judith is educated, raised to expect a genteel lifestyle, and could have pursued a career if her aunt had allowed it. Now in her 40s, she survives on a small annuity and considers herself ‘left on the shelf,’ while other women, namely Moira O’Neill, somehow or another snared a man into marriage. Judith looks jealously at married women and envies them, yet are her days for romance and love past?

Judith’s big event of the week is to visit the O’Neill family. Moira O’Neill, who according to Judith is “like some contented hen,” pities Judith while all of the other members of the family poke fun at her and find excuses to avoid her company. The O’Neills are not related to Judith, but she likes to pretend that she’s a maiden aunt. Underneath all of Judith’s coping and genteel behaviour, however, there’s anger and desperation.

You might as well forget about eligible men. Because you’re too late, you’ve missed your market. Then you’re up for any offers. Marked down goods. You’re up for auction , a country auction, where the auctioneer stands up and says what am I bid?  And he starts at a high price, saying what he’d like best. No offers. Then second best. No offers. Third? No offers. What am I bid, Moira? and somebody comes along, laughable, and you take him. If you can take him. Because it’s either that or back on the shelf for you. Back to your furnished rooms and your prayers. And your hopes.

Judith’s life is already unraveling when she meets James Madden, the landlady’s brother. He’s recently returned from thirty years in America and, to Judith, he carries the aura of exoticism. James Madden, an opportunist with a 10,000 dollar insurance settlement in his pocket, is as lost as Judith. He sees that she’s educated and ladylike, and he also notes the few pieces of valuable jewelry she still owns. James and Judith are drawn to each other–partly because they become allies of sorts in the boarding house, but also Judith is the only person who believes Madden’s stories about his life in America. He says he wants to “marry again and settle down,” and as far as Judith’s concerned, there’s only one way to interpret that statement.

Much of the information about Judith’s descent is given only in hints. We gradually learn that there’s been a series of boarding houses, and then what are all those ‘stories’ spread about Judith and her old friend from convent, Edie? And what’s the real story about Edie, another unattractive single woman permanently locked up–possibly for her own good.

At times, there’s a giddiness to Judith Hearne regarding the male sex that echoes in Stephen Benatar’s marvelous novel,  Wish Her Safe at Home.  Both Benatar’s middle aged female protagonist, Rachel Waring and Brian Moore’s Judith Hearne are given to flights of fancy when men are in the vicinity. Just as we wince when Rachel makes her social blunders with the male sex, we wince when Judith lathers herself up with rouge. The single female protagonists of Wish Her Safe at Home and The Lonely Passion of Judith Hearne have a great deal in common, but, for this reader, Rachel, in her cocoon of insanity, has a degree of protection from the real world which Judith lacks. This makes Wish Her Safe at Home a very witty novel whereas The Lonely Passion of Judith Hearne, although it contains some funny scenes, is terribly sad.  We can laugh at Rachel Waring’s infatuation with various men as we know that reality will never penetrate her self-vision, but when Judith Hearne creates romantic fantasies, we know that painful reality is just around the corner.

She watched the glass, a plain woman changing all to the delightful illusion of beauty. There was still time; for her ugliness was destined to bloom late, hidden first by the unformed gawkiness of youth, budding to plainness in young womanhood and now flowering to slow maturity in her early forties, it still awaited the subtle garishness which only decay to bring to fruition; a garishness which, when arrived at, would preclude all efforts at the mirror game.

So she played. Woman, she saw her womanish glass image. Pulled her hair sideways, framing her imagined face with tresses. Gipsy, she thought fondly, like a gipsy girl on a chocolate box.

There’s a film version of The Lonely Passion of Judith Hearne which I’ve yet to see.