Hard Case Crime just added several early Michael Crichton novels to its canon, written between 1966 and 172 when Crichton was attending Harvard Medical School and moonlighting with these thrillers written under the pseudonym John Lange. And here’s a list of those titles:

Zero Cool and Grave Descend are both re-issues for Hard Case Crime, while the other six titles are new to this publisher. Crichton was re-editing the Lange titles and preparing them for Hard Case Crime at the time of his death in 2008. 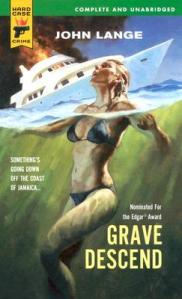 At 166 pages, Grave Descend is a slim thriller, a quick read that demands little from the reader and with very little down time. The story’s central figure is 39-year-old diver James McGregor who’s hired by a shady insurance company representative to dive off the coast of Jamaica, into hammerhead shark country, and retrieve a safe and a statue from a sunken yacht. The name of the yacht … Grave Descend.

McGregor, who’s lived in Kingston for 14 years, gets a call from a guest at the prestigious Plantation Inn located at Ocho Rios.

McGregor hated Ocho Rios. Once a beautiful and elegant strip of coastline, it was now a long succession of gaudy hotels, ratty nightclubs, stud services and steel-band discos, all patronized by hordes of vacous tourists who were seeking something a little more expensive but no different from Miami Beach.

I don’t know about you, but I always find it a bit creepy when tourists hang out in a luxury resort with guards posted at the entrance to keep out the natives. But it’s to this resort that McGregor drives in order to meet Mr. Wayne, an insurance representative  who flew into Kingston following the news that the yacht Grave Descend sank with little warning near to a reef, three-quarters of a mile off-shore. Luckily the six crew members, and a female passenger, Monica Grant survived. The plot thickens with the news that Monica is the mistress of the yacht owner, Robert Wayne, the brother of the insurance company representative, and that the yacht, insured for over 2 million dollars, appeared to sink after an explosion.

A few simple questions lead McGregor to the conclusion that no-one is telling the truth, but curious and also happy to earn a generous finder’s fee, McGregor agrees to dive with his partner down to the yacht, right in hammerhead country….

With brief scenes of ratty bars and desperate middle-aged tourists looking to score at the island’s many tacky nightspots, the book does a nice job of showing the two worlds: sharks in the water and sharks above. Which way do you choose to go?

He waited a moment, the upended, kicking down, following the narrow beam of the flashlight, which was yellow near the source but faded to green and the blue as it went deeper. In the light of the lamp, the thousands of undersea microcreatures shone like dust beneath the water, scattering the light.

As he went down, the water turned colder; he checked his gauge; it was twenty-five feet. His beam had still not reached the bottom. He went down, with the receiver around his neck beeping louder and louder.

The ocean around him was noisy. It was something you noticed on a night dive–the sea was alive with night creatures, eating and clicking with a strange, almost mechanical sound, like a bank of electronic relays far off.

While it is undoubtedly a coup for the publisher to land these 8 titles, I would like to see Hard Case Crime return to crime–resurrected vintage or fresh, lean and mean. I’d put Grave Descend more into thriller territory than crime–although of course there are crimes aplenty here, but they’re surrounded by adventure, sharks, diving, explosions, double crossing, and a couple of bikini-clad babes.