“It’s always the memories you comb through the most avidly that fade the fastest, that are eclipsed  by–what to call it–? a sort of memory-fiction. Like a dream. Whereas the things we forget totally, the things that sneak up on us in the middle of the night, after thirty years–they’re so uncannily fresh.”

Sometimes reading choices are serendipitous, and that is definitely the case with David Leavitt’s excellent novel The Two Hotel Francforts as it turned out to be a perfect companion piece to a novel I read earlier this year: Transit. While Transit (which is highly recommended, by the way) depicts desperate Jewish refugees trying to exit Marseille, The Two Hotel Francforts depicts two affluent couples–one American, the other Anglo-American–in Lisbon in no particular hurry to embark on the SS Manhattan for New York.

We met the Frelengs in Lisbon, at the Café Suiça. This was in June 1940, when we were all in Lisbon waiting for the ship that was coming to rescue us and take us to New York. By us, I mean, of course, us Americans, expatriates of long standing mostly, for whom the prospect of returning home was a bitter one.

The narrator is Pete Winters, a General Motors executive stationed in Paris, who is married to the very high-maintenance, temperamental and neurotic Julia. Being married to Julia is like devoting oneself to a cause, but since Pete acknowledges that “she was never satisfied, my Julia,” it’s a thankless, wearying task. When pursuing Julia, he “disregard[ded] every warning sign” which included Julia’s own mother who told Pete “I beg you to reconsider” when he indicate his desire to marry her daughter. Now, the marriage isn’t about passion, love or even friendship–it’s about one person absorbing the other’s demands, neediness and neuroticism:

As the background of this couple is teased out, we learn that Julia and Pete have lived in Paris for 15 years now in a mausoleum of a showcase apartment. They moved to Paris at her insistence, and “she had sworn” that she would never return to America. Julia intended to be a writer, but “she could only write first chapters. The middle, the vast middle, defeated her.” Instead, she’s become an empty woman who shops and decorates endlessly and is terrified that her many relatives will swoop into her home. She claims to see various relatives in various places and these sightings cause her to panic & run into hiding. Pete, who is used to dealing with Julia’s hysteria, isn’t convinced that these sightings are legitimate.  It’s with a sense of defeat and a low-grade panic that Julia counts the days until the SS Manhattan arrives. Julia schemes to stay in Portugal, and there’s the hint, from this story that’s narrated about the long-ago past, that something goes terribly wrong:

And how funny to think that when all is said and done, she was right and I was wrong! For we would have been perfectly safe in Portugal. Well it is too late for her to lord that over me now.

With money and the appropriate papers, Lisbon is a decent place to wait for a ship sailing for America. After all, “everything that was scarce in France and Spain was plentiful here: meat, cigarettes, gin. The only trouble was overcrowding.” As the refugees pour in, “hotel rooms were nearly impossible to come by.” As a consequence, there’s a desperate end-of-the-world air to Lisbon, with some people staying up all night long at the casino. The Winters are the lucky ones. They have somewhere to go and the papers to ensure they get there.  They are also lucky enough to secure an excellent room at the Hotel Francfort, but with Julia insisting that she doesn’t want to leave, there’s a great deal of tension between Pete and Julia. Then the Winters meet Iris and Edward Freleng and their elderly dog, Daisy. Meeting the Frelengs is a welcome distraction for Pete Winters, but Julia dislikes them. Iris begins to absorb some of Julia’s demanding fitfulness, and this gives Pete a little respite from Julia’s 24-7 care. The meeting seems fortuitous, and the Frelengs offer Pete, at least, interesting intelligent company for the week or so before their ship arrives. But just what is the Frelengs’ game? …. 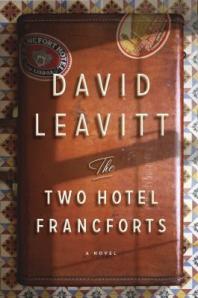 Strong on characterization, the novel sets the scene by showing how Pete feeling “almost giddy with relief and gratitude,” leaps at the apparent lifeline thrown to him by the Frelengs. Pete is mentally exhausted by herding the unwilling Julia to Lisbon, and the Frelengs, who are peers in the same socioeconomic status, appear to absorb some of Julia’s neediness. Julia’s impossible personality does not deter the Frelengs who seem determined to ‘buddy up,’ and the very first time the Winters meet the Frelengs, Iris drags an unwilling Julia off to see the vet blatantly ignoring Julia’s protests and disgust with Daisy.

It seems natural, at first, that the Frelengs, who write detective novels under the name Xavier Legrand, should want to spend the next 7-10 days in the company of the Winters, but then again, Julia doesn’t exactly attract friends. Her petulant self-focus is expressed almost the moment she meets the Frelengs and the two couples exchange thoughts about the war that has ripped their life plans apart:

“And just how is that, pray tell?” Julia said.

“Well, we’ve made it this far without getting killed, haven’t we? A ship’s coming to rescue us. And when you think what some of these poor devils wouldn’t give to have a ticket on that ship–“

“Oh, but it is,” Iris said. “Because we’ve got somewhere to flee to, haven’t we? Whereas all they have to look forward to is exile–that is, if they find a country willing to accept them.”

It’s impossible not to draw parallels between The Two Hotel Francforts and Ford Madox Ford’s excellent novel The Good Soldier, for while the setting is different, both novels examine two marriages and the problematic relationships sparked between the two couples years after the events take place. Leavitt’s intriguing title, The Two Hotel Francforts hints at the duplicity at play in the novel, and that duplicity exists on several levels. No one is quite what they seem and everyone reveals what they want people to see–no more than that.

The ‘rules’ and dynamics of any marriage are impenetrable to outsiders, and both the Winters and the Freleng’s marriages are pathological, but in very different ways. While we know almost immediately how toxic the Winters’ marriage is, just what keeps the Freleng’s marriage together isn’t apparent at first–although the dog Daisy is arguably part of the visible gel that bonds Iris and Edward. Their lives appear to coalesce around Daisy, and it’s because of her they declined to take a ship to England. As these two couples wait for the ship that will take them to New York, the foundation of European civilization is in a state of upheaval; people are running for their lives, and here, just as the Winters and the Frelengs appear to have reached safety, their lives are ripped apart by duplicity and will never be the same. The four main characters, whose actions are clouded with desire, desperation and selfishness, are thrown together by circumstance as the world spins from unbridled fascism. They all lie to each other and to themselves, and as Iris tells Pete:

Poor thing, you’re such an innocent in some ways. Such a novice. You think there’s a protocol to all this … But there are no rules here. We’re beyond rules.

While the narrator of Ford Madox Ford’s novel, The Good Soldier, is classically unreliable, the narrator of The Two Hotel Francforts appears to be reliable. But after I put the book down, I chewed that decision over, and concluded that Pete Winters, in the depths of the lies he contrives, could possibly be unreliable in his version of events. Was his marriage to Julia quite how he portrayed it with him as the unhappy factotum for his wife’s neurotic demands? After all, we only have his version of things decades later. If you can’t already tell, I loved this novel for the way in which Leavitt depicted the complexities of these two toxic, brittle marriages–both kept together by a set of unspoken rules.

18 responses to “The Two Hotel Francforts by David Leavitt”