“I distrust patriotism; the reasonable man can find little in these days that is worth dying for. But dying against–there’s enough iniquity in Europe to carry the most urbane or decadent into battle.”

Geoffrey Household novel’s Rogue Male had been recommended to me several times, but I delayed reading it; part of the delay came from the mistaken idea that it was some sort of spy novel. It wasn’t.

The novel, told by a first person narrator, begins with a simple sentence: “I cannot blame them.” And this sentence is the epitome of the narrator’s attitude to most of the people he meets and most of the brutality directed towards him. In essence, he accepts that we are what we are, that most of us are caught in roles not necessarily of our own making, and in those roles, we are driven towards certain actions. Amazingly generous and Zen really when you consider what happens to him. 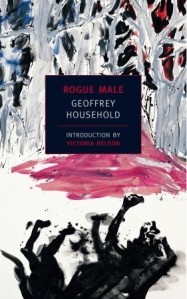 Our nameless narrator, a wealthy Englishman, has been caught just as he was about to assassinate a European dictator. He had the man in the sights of his rifle but hesitated, and that hesitation led to his capture (the word ‘arrest’ would dignify what happens) and torture. According to our narrator he thinks his captors are “beginning to understand that a bored and wealthy Englishman who had hunted all commoner game might well find a perverse pleasure in hunting the biggest game on earth.” There are people, difficult as it is for this reader to understand, who actually enjoy hunting rare and endangered species.

They must have wondered whether I had been employed on, as it were, an official mission, but I think they turned that suspicion down. No government–least of all ours–encourages assassination. Or was I a free-lance? That must have seemed very unlikely; anyone can see that I am not the type of avenging angel. Was I, then, innocent of any criminal intent, and exactly what I claimed to be –a sportsman who couldn’t resist the temptation to stalk the impossible?

The narrator is horribly tortured, and since he does not give his captors any valuable information to implicate any one else or reveal that he’s part of some sort of conspiracy, they are left to conclude that he is probably just what he claims to be–a hunter who wants to bag the ultimate big game. But no matter the reason behind his assassination attempt, his captors, and the narrator, know that there is little choice but to kill him. Under the circumstances–flayed skin, a badly damage eye, and fingernails ripped out, he can hardly be set free to return to England. Instead he is left to die. Badly wounded, our narrator is a survivor, or perhaps even a survivalist. Resourceful and intelligent, he flees for his life….

Rogue Male is superb–the best action-adventure novel I’ve ever read. We know every little about our narrator–except that he’s a member of the British upper class with plenty of leisure time (there’s a wonderful rift about Class X ,) who has wandered into a volatile Europe, crossing over from Poland into the unnamed country on the brink of WWII. We can, of course, guess just who is the object of the ‘big game’ hunt; the question is why.

I’m not going to say a great deal more about this extraordinary novel as to dissect it too much would give away the pleasure that awaits for the next reader. Suffice to say that our man makes it back to England, and while I thought that he would feel safe in his native land, the action only  intensifies, and the figurative broad net created to capture the narrator becomes much smaller, much more defined as the escape and arena for safety becomes increasingly more claustrophobic.

Leaving plot aside–something that is, after all, relatively easy to discover for oneself, I’ll say that at first I thought the narrator was an assassin, perhaps the classic unreliable narrator, but rather his motives remain opaque even when aiming his rifle. It’s only much later that the narrator finally comes to understand his own motivations.

The narrator begins the novel in a very bad spot, and it goes downhill from there as he tumbles down even his own society, reverting to the status of a homeless man, a drifter, and finally an animal. Household cleverly reverses the roles of the hunter and the hunted, and sometimes those roles reverse in a mere second, and there’s even a comment made about unnecessary death, the slaughter of a helpless animal that is a statement on the value of life.  The narrator does, of course, make a mistake or two, but the book is written so that we suspect immediately that a mistake has been made. This all builds incredible, almost unbearable suspense.

For this reader, some of the greatest fun of the novel came from two distinct sources: the characters the narrator meets who help him along the way–unsung heroes who, at great risk to themselves, show a little kindness. But the greatest source of delight came from Geoffrey Household’s incredible main character who honestly puts the James Bond types with all their techno toys to shame. Not only is our narrator extremely resourceful, but he’s physically tough and highly intelligent. He also applies the skills of a hunter to his escape and his slippery ability to evade the men who seek his death. Of course, though, it’s inevitable that he meets someone whose craft and stealth may match his own.

One significant theme of the novel is individualism. Here we have an individual outside of any government or official channels, who acts on his own, thinks on his own, and takes his actions to their ultimate conclusion. His individualism is apparent immediately from the simple fact that he’s the object of massive man-hunt, but as the novel continues and the action intensifies, the narrator, abandoning the resources of society, has no one to rely on except himself and his own considerable skills.

I can admire such an individualist as you. What I respect in you is that you have no need of any law but your own. You’re prepared to rule, or to be suppressed, but you won’t obey. You are able to deal with your own conscience.

Rogue Male was published in 1939, and here in the 21st century, it seems remarkably ahead of its time. If you read the NYRB edition (as I did) I’d recommend leaving the introduction until after you’ve finished the book. It contains spoilers galore.