Tony Hogan Bought Me an Ice-Cream Float Before He Stole My Ma is an unwieldy title that is at least memorable in this bittersweet, funny and compelling story of poverty, single motherhood, and a series of bad choices in men. Get beyond a title that does the book no favours and a bumpy first few pages, and you’ll find yourself in a wonderfully, witty, sharp debut novel written by Kerry Hudson. 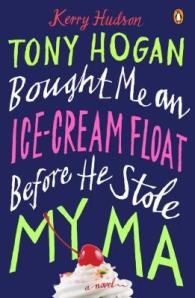 The book begins in the 80s, a little awkwardly, with the birth of Janie, our spunky narrator relating the profanity which accompanied her birth–the result of a brief union with Iris who’d “been tae London and got herself preggers,” and some unnamed American, and while Janie’s birth is celebrated by the Aberdeen Ryan family, the hard realities soon hit. A fight with Iris’s bingo-addicted mother sends Iris onto the streets, and into the Grafton Hilton (“as the guests liked to call it,”) a woman’s shelter full of other bruised and rejected women, and then it’s off to council housing and the gritty slum of Monarch Avenue, a place that Iris initially resists as it’s a bad place for a “bairn.” According to Iris, “I might as well start shooting her up on smack now since that’s what’ll happen,” but Iris doesn’t exactly have a choice. But that’s one of the interesting aspects of the book, when Iris has options, she always chooses badly. But while Monarch Avenue strikes fear into the hearts of those sent to live there, Janie’s reaction, viewed from her shiny new pram, a gift from Iris’s brother, smack addict Uncle Frankie, is of glorious sensation.

On the way to buy the moving-in essentials–tea, milk, bread, fags, Jif and a half of vodka–my eyes soaked in our new neighbourhood. Graffiti and scorch marks, echoes of small fires, decorated doorsteps. Golden Special Brew cans and crushed vodka bottles, bright as diamonds, collected in gutters. Front gardens were filled with mouldy paddling pools and, occasionally, a rust burnished shell of a car. I had never seen anything so beautiful, so many colours, before in grey Aberdeen.

Iris notes that the house, at the end of the street offers an “easy escape,” and in a way Iris’s life is defined by that term–a series of escapes–moonlit flits from slums and grotty bed-sits, endless fresh starts and broken promises from a series of disappointing men. Janie notes that she “had a lot of uncles but Uncle Frankie was the one who came every week, bought presents and wanted to play with me and not just Ma. The other uncles picked me up for about three minutes and then put me aside like a fag end, not taking their eyes off Ma, or the bedroom door over her shoulder.” One of these men is Tony Hogan, the “Aberdonian King, or at least Duke of thugs and drugs,” a spiteful runt with a reputation for explosive violence who wears “streaky” underpants. It’s a relationship with catastrophic consequences:

Tony smothered the life that me and Ma had built, a furry mould growing over a sweating slab of cheese.

Although this is Janie’s story, the novel bursts with a colorful cast of secondary characters in this story of a childhood spent growing up amongst heroin addicts, glue sniffers, and alcoholics. While Janie doesn’t exactly have it easy her friends Davey and Leanne  whose “parents liked a drink,” envy Janie’s comparatively exotic diet which includes the occasional “Fray Bentos pie and peas or Findus Crispy Pancakes.” Leanne’s ma’s world centres on booze and whatever is left over goes to meals such as chips and beans, or chips and egg.

But Leanne’s ma was organized too and on Mondays we would often bump into her in the booze aisle at Safeway with four big sacks of frozen chips  thawing in her trolley. There was always a mouth-watering, fatty smell in the air at Leanne’s and at the beginning of the week there would be red sauce too.

This is a world of flush Mondays with the “long impatient queue at the post office to cash the benefits book before going to Safeway.”

For the first few days we had tinned spaghetti, fish fingers and pink wafers, but by Sunday the cupboards were bare and we ate a lot of toast and porridge and talked about what we’d buy the next day in the shiny aisles at Safeway. Over toast with a scrape of marge Ma explained she was just getting used to it and she’d find a way to ‘make the grub last’.

If this all sounds depressing, it isn’t. This is partly due to Janie’s love for her mother–even as she steers them towards disaster, but part of the novel’s optimism comes from Iris’s seemingly endless spunk, the way adversity slides off her back and a sort of naiveté born from desperation and misguided hope when it comes to judging men. Some of the humour comes from our narrator’s limited knowledge of the adult world:

Frankie always came over on Thursdays. He had to come once a week to collect the little bags of white powder that Ma measured from a bigger bag on scales with numbers like Frankie’s digital watch. Ma did the measuring on Saturday mornings and the little spoons and jumping red numbers always stole my attention, even from Fraggle Rock.

“Can I have a go?” My eyes were fixed on the shiny spoons, the soft white powder.

“No, Janie, how many times do I have tae say? Watch the telly.”

“Just tell me what it is though.”

Ma gave me a look and then sighed. “It’s special flour. An’ I have tae measure wee bags so that people’s cakes come out just right. Now watch the telly. If I can’t concentrate the cakes’ll be shite and then we’ll not have chocolate biscuits or cola this week an’ yer uncle Frankie won’t come over.”

Always on the fringes of society, Iris never rises above extreme poverty–sometimes she floats and sometimes, for  a brief period, she sinks only to return to the surface in another slum location, and over the years, her fierce tenacity is worn down by degrading disappointment recognized by Janie in one beautifully poignant moment. Author Kerry Hudson paints Janie’s colourful world with bold strokes, and while there’s a moment when Janie discovers a world within books, this is not overworn or clichéd.  Given the subject matter, it would have been so easy for this novel to slip off into sentiment, bitterness or loathing, but instead the author shows incredible talent in creating characters whose private lives are mostly sealed from those of us who have some essence of security, and while the characters are treated with empathy, their inability to change, extreme social disadvantages, and zest for self-sabotage is also evident.  In spite of adversity, or perhaps because of it, there’s an incredible ‘us-against-the-world’ bond between Janie and Iris and we see this in one incident when Iris is called to task for Janie’s swearing.

We left the nursery in silence, Ma smoking a roll-up, looking like she hadn’t slept in a week or maybe like she had slept for a whole week. When the nursery was just a grubby finger smudge behind us Ma looked down at me and said in her poshed-up telephone voice: “Will you speak to Janie about swearing? Fuckin’ busybody!”

I laughed and swung our linked hands.

Pleas of laughter escaped us and spiraled up into the hot, blue Scottish sky. We laughed all the way home

The book, essentially a coming-of-age story, follows Janie’s nomadic life until she is 16. Janie initially, of course, doesn’t have any choices, so she follows her mother from seedy bedsit to notorious gritty slum, sometimes escaping with the just bare essentials –whatever she can grab–as Iris never settles down but moves from one tarnished opportunity, usually sparked by either a man’s promises or a man’s violence, to another. Towards the end of the novel, which flounders just a tiny bit, a teenage Janie ends up in Great Yarmouth, and it’s here that she’s able, finally, to make some decisions of her own. The big question, of course, is will history repeat itself or has Janie learned from the mistakes of her mother? This is a remarkable book reminiscent of the early works of Roddy Doyle, and it’s going to end up in my best-of-year list.