“Some people, he thought, and I am one of them, are servitors without knowing it, and go through their lives implementing other people’s fates.”

Author Sumner Locke Elliott (1917-1991) is best remembered for Careful, He Might Hear You, the story of an orphaned Australian boy who becomes the subject of a custody battle between his two aunts.   Fairyland is acknowledged as “largely autobiographical,” and if there’s any doubt about that, just re-read the introduction after reading the book, and you’ll find that significant signposts match. The introduction written by Dennis Altman includes a short biography of the author, who like his fictional creation Seaton Daly, moved to New York. Fairyland, published the year before the author’s death is his “coming out novel.” The story follows the life of its homosexual protagonist from early childhood through to adulthood, and Altman states that “remains one of the most striking records we have of camp life, as it was then referred to, in Sydney of the 1930s and 40s.”

Australian Seaton Daly grows up in post WWI Sydney under the baggage of a particular myth concerning his parents. His father is a fallen WWI hero, and his mother, a valiant war widow wrote “Australia’s most sacred patriotic song, Just a Little Soldier Woman.”  The truth about this myth, when it arrives, serves as a stunning revelation, but then almost everyone in Seaton’s sphere seems to have constructed myths, in one form or another, about their lives.  While a child, Seaton understands that he’s attracted to members of his own sex, and although he’s not confused about his sexuality, he is constantly and repeatedly confused by other significant people he meets in his life. Part of this can be explained, of course, by the fact that during the period in question, homosexuality was illegal and many of the homosexual men Seaton meets have created surface heterosexual lives. But this cannot fully explain Seaton’s confusion as he missteps repeatedly, sometimes with painful results, throughout the novel. Various characters, including Seaton’s mother, cherry pick their pasts and their present, creating a version of life that they can accept and deal with while other characters exhibit a strange duality of behaviours.  This effectively creates a subtext of schizophrenia, a “fairy tale” that rends Sydney society with pretense on the surface and reality behind closed doors, and Sumner Locke Elliott makes it quite clear that this is a troubling facet of Sydney society that our hero, Seaton Daly, never quite comes to terms with. 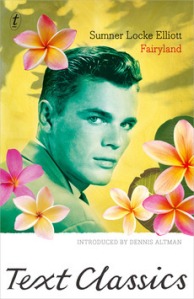 Since this is a novel that encompasses Seaton’s childhood and on through several decades, the plot includes the most significant people and events in Seaton’s life. Orphaned and then brought up by Essie, Seaton initially is sent to the expensive private Prince Albert Day School courtesy of Essie’s eccentric wealthy employer. Essie is Miss Dalgarno’s “loving servant,” who “once in  great while” is granted a day off.

Essie, his cousin on his father’s side, cooked, cleaned, washed, ironed, baked, stewed, peeled, polished, got up at six in the morning and often wasn’t in her bed until after eleven. At times Essie looked fagged out and so pale she might not have seen sunlight in months, which was not far from the truth. Once in a great while Miss Dalgarno awarded her a day off, and she and Seaton went to the pictures at the Crystal Palace or Hoyts in Double Bay. Not that Miss Dalgarno was draconian–it was merely that nothing occurred to her until there was a dramatic confrontation. Not until you fainted across the vacuum cleaner did it occur to her that you might be overworked.

There, as the poorest child in the school, unwanted by Miss Peel, the school owner, a heavily powdered “ageless virgin,” he makes one single friend, Hilary, a serious little girl with the ethereal goodness of Jane Eyre‘s Helen Burns. Hilary is one of the few people Seaton meets who has a calm, sincere, cohesive core. There are no games, no misunderstandings, just acceptance of one child of another. It’s a short, significant relationship; “He would remember her in years to come somewhat like a river.”

Still in childhood, Seaton moves from Point Piper, the affluent area of Sydney to the “unenviable workingman’s suburb” of Arncliffe with a view of Botany Bay, and there he sees the wild swings of class levels within Sydney society.

There was only one barefaced word for Arncliffe–common. It was the common denominator. It was the omnipresent Monday morning washing on every clothesline in every similar backyard, the unadventurousness of hydrangea and cosmos and lantana, the pretentiousness of plaster storks holding up bird-baths. It was the waxed fruit on the dining room table and the wedding photographs arranged on the piano and people’s never used hand embroidered guest towels as pious as their teetotalism. It was the dull nasal voices expecting nothing new, the men all wearing collarless shirts but showing the collar stud at the adam’s apple, the women in curlers and carpet slippers wet-mopping the veranda tiles “of a Saturday morning,” the plaintive twangy voices of the children. It was hearing for better or worse the steely pianolas playing “Tip Toe Through the Tulips” and knowing that the Sunday roast with two vegetables was as certain as birth, marriage, and death and that there was nothing else to look forward to and, worse, their unheeding of their dreadfulness of not caring. It was the common bond of their common-place assurances that held them together, and although at twelve years of age he was not yet able to digest the significance of this, he had become quietly aware, perhaps ashamed, of his knowledge of growing secret antlers, possibly wings. That among these people he was a changeling.

But not even to Essie, not even in a whisper or a dream, did he ever voice it. “I am different.”

While Seaton has various homosexual relationships, he also has several significant relationships with women. Cousin Essie is one of those, and Hilary, of course, but then there’s also the darkly neurotic Gin, and Betty Jollivet who “burned with an incandescence.” But there’s also Seaton’s mother, a woman who remains a mystery until Seaton, in maturity, can finally understand her behaviour.

Not until he was a grown man, and it became necessary for him to go through Her papers before he left the country forever, did he discover what it was that She was composing behind that shut door as blank as her face; when he discovered the dozens of patriotic stories and poems she had written for long-ago defunct magazines with names like Digger and Battalion Bulletin. Reading them he was flushed with outraged pity for Her and shame for his priggish parsimoniousness toward Her. They were, patently, all about herself and they had titles like “The Little Subaltern” and “Doing Her Duty” and the heroines were always slips of girls standing bravely up to  Cruel Huns behind the lines and rescued by big gentle lieutenants who took their tiny hands into their great paws and gazed into their liquid eyes. He now was able to see Her against the background of Armageddon that She had created for herself after his father was killed and that for Her the war which had brutally taken from Her the source and reason for Her living had been adjusted or rather She had rearranged it into a singular compassionate glory.

The book conveys the difficulties of negotiating homosexual life in the 30s and 40s “knowing that just the shadow of a wrong move could bring on catastrophe,” as Seaton walks through the minefields of hidden sexual orientation and becomes a bookbinder working for a lustful, married, pretentious bookseller, joins the Drury Lane Players, works as a copy writer and eventually lands in radio. Along the way Seaton has various disorienting, hilarious sexual encounters; he is always the prey and is targeted by the pompous, predatory actor Byron Hall,  and Seaton’s employer, the lascivious Mrs. Dick. She’s  “on a strange sort of antiquated anti-queer crusade” and has a convenient arrangement with her accommodating, apron-sporting spouse, Minty Milton Dick who found his wife “working in a fish-and-chips place and took a girlish fancy to her and more or less adopted her and made her over into the lady he would have liked to be .”

Other memorable relationships include Seaton’s slow, teasing courtship of an opportunistic young man who works in the men’s department of a clothing shop, and unexpected, surreal wartime passion. All of these relationships–with both men and women, sexual and non-sexual, underscore the schizophrenia of Sydney society–a world in which no one is quite what they appear to be. Optimistic, life-affirming, generous, full of wonderful characters and amusing in tone, this is the story of a man who yearns to live a one-stranded life, a life without the schizophrenia of deception. His dream is to live in America, “that land of cars and movie stars and night baseball, where, according to some recent survey, somebody was fatally shot every eight minutes.”