“I had read the novels of George Sand and I was divided between the shame of having given myself to a servant and the joy of having raised to my level a man who, according to the social laws, was in a position inferior to my own.” (Angélina Lemoine during interrogation.)

Given the title Victorian Murderesses: The True History of Thirteen Respectable French and English Women Accused of Unspeakable Crimes, I expected, well, something along the lines of sensational true crime stories, but instead, the book is a scholarly social study examining the circumstances which led to the crimes along with the attitudes of society, the judges, the juries and the newspapers. Some of the women here were convicted of their crimes, others were suspected of crimes on what seems today the flimsiest of evidence, and others who should have been convicted walked away mostly thanks to prevailing 19th century attitudes about women. This is a reprint from 1977, and portions of the book originally appeared as articles in Feminist Studies, Victorian Studies, and the Journal of Psychohistory, so that should give you a sense of the book’s scholarly tone. 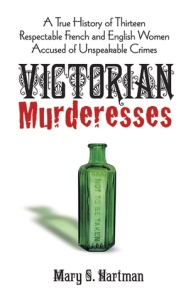 The book covers 12 sensational murder cases and is broken down into six chapters with two cases linked in one chapter:

1. Arsenic and Matrimony: The Cases of Marie Lafarge and Euphémie Lacoste

2: The Waiting Games of Brides-to-Be: The Cases of Madeleine Smith and Angélina Lemoine

3. The Singular Outcasts: The Cases of Célestine Doudet and Constance Kent

4. The New Women: The Cases of Florence Bravo and Henriette Francey

5. Sex and Shopkeeping: The Cases of Gabrielle Fenayrou and Adelaide Bartlett

6. Poison, Revolvers, and the Double Standard: The Cases of Florence Maybrick and Claire Reymond.

* The thirteen women in the title include the “mother-daughter team” in the Lemoine case.

Each chapter outlines the cases against the accused women, the evidence, the outcome of the trials and societal attitudes of the time. The author emphasizes that most of the women “bungled badly in the act, and those who got away with it relied upon methods that required special circumstances and relations between the sexes.” While some of the murders were truly horrible (the case of Célestine Doudet includes child abuse), other cases generate sympathy. One of the points that the author makes is that the circumstances these women found themselves in, loveless, arranged marriages, for example, happened frequently:

The circumstances which prompted their actions, the stratagems they employed, and the public response to their reported behavior display a pattern which suggest, far from committing a set of isolated acts, the women may have responded to situations which were built into the lives of their more ordinary peers.

This is the author’s argument, and one, that is argued well: the circumstances these women found themselves in were not unique for the times–the uniqueness is found in how the women reacted to their situations. Similarly, the author argues that these women whose cases became causes célèbres “in many ways were quite unexceptional” until the crimes were committed. With their “lives thrown open to public scrutiny” some of the most shocking revelations, and those details must have titillated those crowds at the trials, were the sexual details pulled from the dark corners of marriages and examined as part of the tracing of motive.

I was quite familiar with the cases of Madeleine Smith (after all there’s a wonderful film version Madeleine) and Constance Kent, while the other cases were either recognizable just by name or completely unknown. If you’re looking for the nitty gritty details of the crimes, then this isn’t the book for you. as the book examines the “accused murderesses as women rather than as criminals.” Included are some fascinating facts and figures:

For example, in England from 1855 to 1874 the annual totals of women tried for murder, which ranged from twelve to forty-two, twice exceeded those for men and normally were half as high, whereas women were only a fifth to a quarter of those tried in assize courts for all felonies.

The cases of Marie Lafarge and Euphémie Lacoste, four years apart, involved arranged marriages both which ended with dead husbands allegedly poisoned by their wives.  In spite of the fact that there was solid evidence against Marie Lafarge whose case, for this reader, garnered far less sympathy than that of Euphémie Lacoste, the Lafarge case generated a great deal more public sympathy at the time.  Part of this wave of public sympathy for Marie, and not for Euphémie, can be explained by the fact that Marie was a member of the aristocracy and was a Parisian. Also there was the issue that the orphaned Marie was married off  by her relatives using the services of a marriage bureau–a small fact that Marie was unaware of when she tied the knot. Marie’s relatives, obviously in a hurry to get rid of the young woman, failed to investigate her future husband’s finances. Poor Euphémie Lacoste, on the other hand, was just 22 when she was married off by her parents to her nasty, syphilitic 68-year-old uncle, and stuck in the provinces, she was subjected to more judgement and petty, small-minded gossip than her more romantically-perceived Parisian counterpart. These days, Marie Lafarge, who seemed to be her own romantic creation, would be on facebook whipping up a fanbase, or “her believers” as she called them and selling copies of her memoirs.

Both Marie’s guardians and Euphémie’s parents were criticized in the national press for the husbands they selected for their charges. The fact that neither young woman had a real role in the decision was deplored more in Marie’s case, for although Lacoste appeared to be a worse choice than Lafarge, greater regard was expected for the wishes of a young woman of Marie’s status and “romantic” credentials. In any case, a young woman’s right to participate in the choice, and even to seek a love-match, was an emerging urban deal which provincial girls were not seen to share. For Euphémie, criticism centered less on the failure to consult the bride-to-be than on the choice of a husband who was three times her age.

Marie, with echoes of Madame Bovary’s early attempts to make her marriage livable,  preemptively put her foot down in the marriage, and made her own status in the family home quite clear while Euphémie seemed to be little better than a servant/concubine in her uncle’s/husband’s home. Another fascinating tidbit here is the author’s comment that “it has been observed that the French wife consistently exercised more unchallenged authority within her sphere of the home that her English counterpart.”

Both cases delved into sexual relations between husband and wife which included details of neglected  “personal hygiene” by the husbands, and Lacoste preferred to consult the veterinarian for his many ailments rather than the local doctor. The case of Marie Lafarge became one of the weapons in the arsenal for the argument for divorce and the inherent moral problem of a husband’s “legal right to rape,” especially interesting since Marie Lafarge clearly held the reins of the sexual relationship she may or may not have had with her husband. It’s fascinating to read the reaction of the day to Euphémie’s case, a case in which she was clearly victimized by the press and the local population of the small provincial town she lived in.