In Certain Circles by Elizabeth Harrower

“I was attracted to the strangeness of his mind as a psychiatrist might have been drawn to an interesting case. He wanted a resident analyst. Neither of us understood.”

In Certain Circles, Australian author Elizabeth Harrower follows the intertwined  lives of four characters, two sets of siblings from vastly different economic circumstances, from youth to middle age. Siblings Stephen and Anna Quayle are orphaned after their parents are killed in a railroad crossing accident. Subsequently brought up by an intensely distracted uncle and his neurotic invalid wife, Stephen and Anna both learn that life isn’t a golden opportunity as much as a series of insurmountable obstacles. In contrast to Stephen and Anna are the Howards, siblings Russell and Zoe. The Howards, a prominent Sydney family, are educated, affluent and influential people, and Elizabeth Harrower explores the two dynamics of the Haves and the Have-nots, and shows that growing up with privilege and love cushions and cocoons, and yet sometimes can also be its own handicap in unexpected ways. 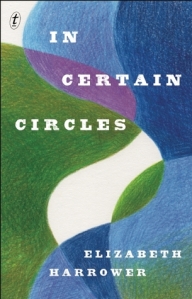 When the novel begins, Zoe is seventeen, and her brother Russell is now home after some years in a POW camp. Russell, already altered by the death of two close friends in a swimming accident, returns from war and “proceeded to alarm and disappoint his parents by refusing to involve himself in any of the activities they felt him suited to.” Russell is subdued, controlled and it’s clear that there are strong emotional undercurrents hidden beneath the surface of his calm demeanor, so while he’s actually adrift, he covers this well. Outwardly Russell doesn’t present too many concerns; there are two constants in his life: his close friendship with Stephen Quayle and his relationship with Lily. The Howards approve of Lily, a lecturer in German, a woman of their social circle and a neighbor. She’s considered ‘good’ for Russell. Stephen introduces Zoe to his friends, Stephen and Anna, and he asks Zoe to befriend 15-year-old Anna. Zoe isn’t used to being around people outside of her family’s social sphere, and the “signs of want” in Anna’s cheap clothing “were repellent.” But since Zoe loves her brother Russell, she makes a few weak attempts to befriend Anna noting that “it was awkward to know people who had less money and no proper home.” Meanwhile, Zoe finds herself strangely attracted to Stephen, “a weird irascible character out of some dense Russian novel.” Zoe’s attempts to befriend Anna are reluctant and spurred by the desire to please others. In one painful scene, she attempts to give Anna some discarded clothing, and the offer backfires:

Up off the chair, Anna shot, her eyes growing larger by the second. She backed away, saying, ‘I don’t need anything.’ As if she had unwittingly fired a revolver point blank at someone she’d never seen before, Zoe’s own eyes and face opened with a sort of belated, reciprocal shock. ‘I know you don’t need anything. You’d be doing me a favour. One of my ratty ideas. Stay here while I get us some coffee. We both missed out in all the turmoil down there.’ Escaped, dropping from stair to stair, she gave a series of low groans, not having to imagine self-indulgently what it might be like to be Anna. This small blow was in addition to the rest of her life, Suffering, endurance, were things that Zoe herself knew nothing about, except through art, and because of Russell. And even that, what she had seen and read that pushed her beyond her own experience, had the very impact, she realized now, of watching an experiment in chemistry, never having studied the subject.

Of the four main characters Zoe, Russell, Stephen, Anna–five if we count the neurotic Lily, only Zoe has the capacity for happiness. She’s uncomplicated and thanks to her privileged childhood, she doesn’t grasp how difficult life can be. The introduction of Stephen and Anna into Zoe’s world casts a shadow onto her simplistic view of life, and she cannot understand why Stephen has a menial job, or why he doesn’t go to university. This lack of understanding springs partly from Zoe’s youth, but also partly because she doesn’t want to leave the “pink marshmallow castle of her life.”

She was too young to be thoughtful, or interested in someone else’s problems. She felt a huge impatience at this unwarranted check to her self-absorption and happy conceit and ambition. So they had all had more troubles than she. Did that really make them superior? If two men were walking along the street and a brick fell on one, missing the other, did that make the injured one a better person? All he had learned was what it was like to have a brick fall on his head. It had happened to him. Why make a virtue of it?

The plot allows us to see both sides of the Want-Equation: Stephen’s bitterness that other people have privileged lives, and Anna’s sagacious realization that adversity doesn’t necessarily make people ‘better.’ Of all the characters in the novel, Anna seems to grasp the painful, touchy dynamics of the Haves and the Have-Nots–with one side exhibiting their largesse, and the other side showing their gratitude.

You can admire the way someone meets hard circumstances, but you can’t admire him because of them.

We follow the troubled lives of Zoe, Russell, Stephen and Anna for several decades–through marriages & love affairs, and these are lives in which duty, pity and obligation play large roles. As one character admits: “If we lived forever, there would be time to recover from mistakes of twenty years duration.” These are not happy people, and when it comes to the intelligent observations of the minutiae of marital politics, author Elizabeth Harrower has a painfully fine, unflinching eye. Conversations between those trapped in marriage are laced with the undercurrents of lashing criticism, and we see three examples of how years spent under a subtle domination directed by invalidism, neuroticism, or bitterness can effectively erode the personality, confidence and willpower of the less-dominant spouses. Even though this sort of marital dominance is clearly seen in others (the relationship between Anna & Stephen’s aunt and uncle, is one example), other characters seem unable to avoid similar traps, and over the decades, we see misery gradually descend and dominate two other marriages. I wasn’t entirely convinced by the book’s ending which seemed to wrap things up far too conveniently for a couple of the characters after an implausible deus-ex machina event, but that’s not the part that stays with me. The part that remains is the lingering unhappiness. This is my second Harrower novel, but there will be more. For Lisa’s review go here

9 responses to “In Certain Circles by Elizabeth Harrower”