The Murder of Dr Chapman: The Legendary Trials of Lucretia Chapman and Her Lover by Linda Wolfe.

The book The Murder of Dr Chapman: The Legendary Trials of Lucretia Chapman and Her Lover gives us a glimpse into the attitudes and prejudices of early 19th century America. The title also holds no secret as to what happened to Dr Chapman, an affluent speech therapist who died after a long, painful, violent illness, or that his wife (hardly a grieving widow) and her lover were hauled into court for the crime. So while the title gives us the basic premise of the book: husband dead–wife and lover accused, some of the most intriguing elements of this crime include questions of guilt, but also how society closed ranks against Lucretia–but only when convenient to do so.

After reading about various Victorian murderesses–some who got away with their crimes, I was ready to read about the Chapman case–a cause célèbre of its times partly due to the degree of scandal involved but also a famous case thanks to the salacious memoirs of one of the accused and also the extensive journalistic coverage of the case by William E. Du Bois. 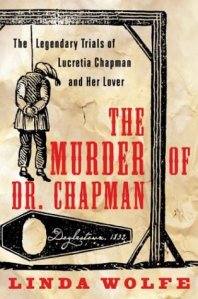 Lucretia and William Chapman ran a boarding school, taught the children of the local elite, and enjoyed successful careers. William had an international reputation for improving stammering, and ambitious, well-educated Lucretia was known to bring her charges to church every Sunday. Images of both of these people seep through the pages, and there’s the sense that this was a marriage that ‘worked’ well as a business arrangement but that by 1831, 5 children later, all romance, passion and even affection, if they’d ever been present in the first place, were now, at least, entirely absent.  William had gained an enormous amount of weight, seemed to have delusions of his own grandeur and chose to be increasingly absent when it came to family life interactions.

So with the Chapmans’ marriage stagnant and at a stalemate, trouble arrived on their doorstep in the form of a man, originally a Colombian, whose family relocated to Cuba: Carolino Estrada Entrealgo, otherwise known as Lino, a thief and a murderer who was tossed out of Cuba and who washed up, eventually, at the Andalasia mansion owned by the Chapmans. Well, you can guess what happened next….

We see Lino as a clever con-man and exactly the circumstances that contributed to Lucretia being duped by a penniless, tattily dressed, albeit exotic, stranger who posed as the son of the governor of California. It’s interesting, though, that while Lucretia and Wiliam Chapman were duped into thinking that Lino was a wealthy man who’d suffered from a series of catastrophes, the merchant who was told to supply Lino with new clothing on credit was not fooled for a moment, and, in reality, all the signals of Lino’s duplicity were there–including his refusal to write anything because he was “ashamed” of his handwriting.

The book covers the story of William’s horrible death, Lucretia’s hasty marriage to Lino (9 days after the death of her husband), Lino’s behaviour after his marriage, the investigation into William’s death, and the trial.  I can only conclude that Lucretia must have been head over heels in love with Lino. If she didn’t see the warning signs before the death of her husband, Lino rapidly gave her reason to suspect his motives soon afterwards.

The book draws a portrait of Philadelphia life, a city known to be “particularly stuffy,” and we’re told that “Charles Dickens complained that after he walked about the town for an hour or two, its monotony made him feel as if he was metamorphosing into a Quaker.”  Coincidentally, I just finished reading John O’ Hara’s Ten North Frederick which is set in the fictional Pennsylvania town of Gibbsville, and the impression I gained from that book was that the region was insufferably stuffy–well at least the circle of society O’Hara’s characters moved in.

The book includes details of the notorious trial with its many colorful participants–including lawyers who saw the case as an important step in their careers. Towards the end of the book, author Linda Wolfe offers her own version of what really happened at the Chapman home. I won’t give away the verdict or the fate of Lucretia and Lino, but it’s interesting to see how society and the law closed ranks on this pair. Society’s judgment proved every bit as effective as the legal judgment.

9 responses to “The Murder of Dr Chapman: The Legendary Trials of Lucretia Chapman and Her Lover by Linda Wolfe.”