You Could Be Home by Now by Tracy Manaster

Point me in the direction of a novel set in a retirement or gated community, and there’s a good chance I’ll read it. Take Claudia Piñeiro’s Thursday Night Widows–a novel set in an affluent Argentinian community whose residents are not as immune to the imploding economy as they think. Then earlier this year I read Pascal Garnier’s fantastic Moon in a Dead Eye about a handful of French retirees who discover that a gated community is not the healthy, safe choice they imagined.  Eli Gottlieb’s novel Now You See Him  brings an Arizona retirement community into focus, and this brings me to Tracy Manaster’s novel You Could Be Home By Now set in The Commons, a luxury retirement community located outside of Tucson, Arizona. 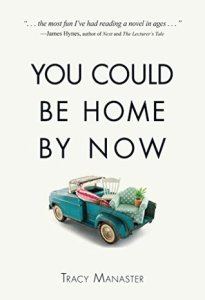 The gently humorous You Could Be Home by Now is partly about life inside the retirement community, but the main thrust of the novel is grief–how we cope with it, how we live with it, and whether or not we move on from tragedy.  The number one rule of The Commons is that no permanent resident can be under age 55, and the novel’s central dilemma revolves on the discovery that one of the residents is now the guardian of a small child. This discovery raises a debate, subsequent moral questions, and creates opposing camps within the community, but even more than that, the discovery of the child causes simmering emotions and tensions to explode.

But let’s back up a bit. The novel begins with Seth and Alison Collier, two young, married teachers, working at the same Vermont school, who after the loss of their baby, decide they need a fresh start. They toss aside their old lives and, on a whim, relocate to Arizona when they accept jobs at The Commons–a luxury “cart accessible,” retirement community of over six thousand residences with two golf courses and “three convenient villages for all your shopping, entertainment, and social needs.” Hoagie Lobel, President and CEO of The Commons employs the Colliers–Seth to run the community newspaper and Alison to be the town historian. Of course, there’s a bit of a problem with getting history for a newly constructed town.

The houses were all flat roofs and projecting beams, sand-colored stucco, corners rounded to benign nubs. They devoured their lots and the trees were all spindly and new.

“I don’t see any For Sale signs,” Alison said. “I guess you haven’t been hard hit by this real estate mess?”

“HOA doesn’t allow them. Messes with the neighbors’ heads.” Lobel tapped his temple. “But we’re doing alright. Had to postpone work on Phase IV, but what’s already built… well, most folks bought to live here, right? And that’s why you’re here, see. We’re going to add to that whole experience.” Lobel drew out the word. “Tough times hit and people like living in a real place. Like be a part of that place. So we get our own paper. And you—” he turned to Alison. The cart drifted into the neighboring lane. “You, Miss, you’ve got to add some authenticity to our town. Some history when there’s really none.”

While Seth and Alison begin by being central characters, they’re very quickly pushed aside as we are introduced to various residents. Benjamin, for example, is a divorced retired veterinarian, whose ex-wife, Veronica aka Ronny and ex-home are still in Portland. Benjamin relocated for a fresh start.  He plans for an active retirement in the sun, far away from his old life and his old problems, and The Commons fits the bill.  It’s through Ben that we really get a sense of life in The Commons and why it’s a gold-plated living arrangement for retirees:

The layout of the cart paths made it a huge pain in the rear to shop off site, so most folks didn’t bother. Ben Thales did though. Eggs were fifty cents a dozen cheaper at the Wal-Mart across the way. Chicken breasts too, almost a dollar less a pound. And it had been a close eye on his money that got him here in the first place. Golf twice a week, tennis twice a week.

Most of the residents drive everywhere on golf carts–the place was designed that way. The residents are in the same income bracket, golf-aficionados and there are widows aplenty.

The novel’s theme: surviving grief is played out in three story strands. Benjamin and his wife, now-ex-wife, Ronny had a daughter, a junkie, who disappeared years before. Her absence helped contribute to the demise of their marriage, and even though they are divorced, they still retain a PI who rakes over the long since cold trail of the missing daughter. Another grief thread is played out through Seth and Alison. They’re attracted to The Commons because they think that a new environment will allow them to heal and forget and that in a retirement community “they could jog down the streets of a town without strollers.” Seth and Alison learn the hard way that you can’t run away from your problems.

The final story thread that ties into surviving grief concerns recent widow Sadie whose granddaughter, Lily arrives in The Commons to spend a few months with her grandmother. It’s through this relationship that author Tracy Manaster does a good job of showing that the generations need each other. Sadie and Lily discover a healthy rapport that grounds them both, and it’s through this relationship and the uproar involving a resident child that the reader begins to question the nature of ‘perfect’ retirement communities in general. While this was a pleasant read, a couple of scenes rang false; Seth and Alison’s abrupt change of career tested credulity, a couple of the meltdowns seemed unlikely, and teenage Lily was a little too sharp and wise-cracking for my tastes.