The Birds and Other Stories by Daphne du Maurier

Regular readers of this blog know that I am fascinated by the book-to-film connection. Films don’t have to slavishly follow the books on which they are based–case in point: Balzac’s  Colonel Chabert. In the film version, the role of the lawyer Derville is greatly expanded, and only the visuals of a film could convey the immense human carnage and the frozen dead at the Battle of Eylau. And this brings me to Daphne du Maurier’s The Birds–one of six stories in this excellent collection. The foreword is written by David Thomson, and rather interestingly, it focuses on the Hitchcock-du Maurier connection. I didn’t really expect that, but was very pleased to read this essay in which Thomson explores the relationship between the writer and the director, noting that “they were good to each other,” and then listing the films Hitchcock made from du Maurier’s books and stories. There’s even an anecdote to consider–a conversation that took place between Truffaut and Hitchcock when the former asked Hitchcock “how many times he’d read The Birds.”

What I do is to read a story only once, and if I like the basic idea, I just forget all about the book and start to create cinema.

The foreword goes on to explain Hitchcock’s dilemmas with Rebecca & Jamaica Inn, and also how Hitchcock’s vision of The Birds gave us the film we have today. Certainly if any film captures an audience with its visuals, then that film must be The Birds. The Birds is, arguably, as iconic a film as Psycho, so there’s really no need to delve into plot other than to say it’s Birds vs Man. Yes there’s plenty of visual imagery in the story (the film was shot at Bodega Bay), but interestingly, for this reader, it’s the silences contrasted with the sounds that resonate in my memory. 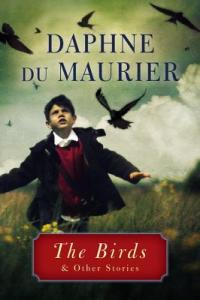 The book’s main character is Nat, a disabled part-time laborer whose WWII experiences help him to prepare for the birds. He lives on the Cornish coast in a small cottage with his wife and two children

He got up and went out of the back door and stood in the garden, looking down towards the sea. There had been no sun all day, and now, at barely three o’clock, a kind of darkness had already come, the sky sullen, heavy, colorless like salt. He could hear the vicious sea drumming on the rocks. He walked down the path, halfway to the beach. And then he stopped. He could see the tide had turned. The rock that had shown in midmorning was now covered, but it was not the sea that held his eyes. The gulls had risen. They were circling, hundreds of them, thousands of them, lifting their wings against the wind. It was the gulls that made the darkening of the sky. And they were silent. They made not a sound. They just went on soaring and circling, rising, falling, trying their strength against the wind.

Here’s Nat and his family, trapped in their house listening to the birds trying to break in:

The tapping went on and on and a new rasping note struck Nat’s ear, as though a sharper beak than any hitherto had come to take over from its fellows. He tried to remember the names of the birds, he tried to think which species would go for this particular job. It was not the tap of the woodpecker. That would be light and frequent. This was more serious, because if it continued long the wood would splinter as the glass had done. Then he remembered the hawks. Could the hawks have taken over from the gulls? Were there buzzards now upon the sills using talons as well as beaks? Hawks, buzzards, kestrels, falcons–he had forgotten the birds of prey. He had forgotten the gripping power of the birds of prey. Three hours to go, and while they waited the sound of the splintering wood, the talons tearing at the wood.

The second story, Monte Verita, is a sort of blend of Lost Horizons meets Heaven’s Gate. This was my next-to-least favourite in the collection. This is followed by The Apple Tree, a psychological tale of a middle-aged widower who feels nothing but relief when his wife dies. This is an interesting tale as the main character, a man of limited self-evaluation, isn’t exactly nice, and we only get negative memories of his now dead wife, Midge. Delighted to find himself unexpectedly unfettered, the widower remembers his deceased wife as a passive aggressive long-suffering martyr, but there are hints in this story of a stale marriage and that perhaps Midge really did suffer:

So they lived in different worlds, their minds not meeting. Had it been always so? He did not remember. They had been married nearly twenty-five years and were two people who, from force of habit, lived under the same roof.

Through the widower’s memories, we see how he and his wife stumbled through their lives and their marriage, but it was the husband’s retirement that forced them together. Now Midge’s death has relieved her spouse from creating excuses to avoid her company:

The ideal life, of course, was that led by a man out East or in the South Seas, who took a native wife. No problem there. Silence, good service, perfect waiting, excellent cooking, no need for conversation; and then, if you wanted something more than that, there she was, young, warm, a companion for the dark hours. No criticism ever, the obedience of an animal to its master

The Little Photographer is the story of a young, bored, & beautiful married Marquise, so in love with herself, she can’t even imagine the trouble she invites to her doors when left to her own devices while on holiday. Kiss Me Again Stranger is the story of a young man who meets the girl of his dreams–or so he thinks. The Old Man is too tricky to describe and my least favourite story in the collection. This collection of du Maurier stories is well worth reading for the intro and The Birds  alone, but  what’s interesting here is du Maurier’s range: horror, fantasy, crime and the psychological domestic drama.