I’ve been meaning to read Margery Allingham (1904-1966) for years, and what better way to start than with her first Albert Campion novel, The Crime at Black Dudley (1929).  The best way to describe the story is as a romp; there are elements of thrilling adventure in this tale and lots of humour introduced through the bizarre character of Albert Campion.

Most of the novel is set inside an isolated gothic country mansion–the Black Dudley of the title, and it’s here that guests gather for a weekend houseparty. There’s a small handful of guests: George Abbershaw, who turns out to be the main character, is a famous doctor who specializes in pathology “with special reference to fatal wounds.” George is there to pursue the attractive Margaret Oliphant, another member of the party. Also attending is actress Anne Edgeware, newly qualified doctor, Martin, his fiancée Jeanne, Cambridge rugger player, Chris Kennedy, a “stray young man” named Martin, and Albert Campion, who, according to Margaret is “quite inoffensive, just a silly ass.” The party is hosted by the Black Dudley’s owner, scholar, Wyatt Petrie, the “head of a great public school, a First in Classics at Oxford, a recognized position as a minor poet, and above all a good fellow.” Wyatt’s wheelchair bound elderly uncle, Colonel Gordon Coombe co hosts the event, and he encourages his nephew to bring young people down to the country in order to enjoy their company. 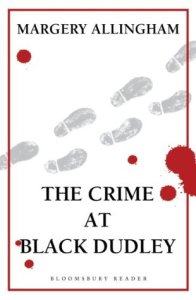 What should be a jolly weekend in the country is immediately overshadowed by the atmosphere of the remote forbidding house and its unwelcoming grounds:

The view from the narrow window was dreary and inexpressibly lonely. Miles of neglected park-land stretched in an unbroken plain to the horizon and the sea beyond. On all sides it was the same.

The grey-green stretches were hayed once a year, perhaps but otherwise uncropped save by the herd of heavy-shouldered black cattle who wandered about them, their huge forms immense and grotesque in the fast-thickening twilight.

In the centre of this desolation, standing in a thousand acres of its own land, was the mansion, Black Dudley; a great grey building, bare and ugly as a fortress. No creepers hid its nakedness, and the long narrow windows were dark-curtained and uninviting.

But while Black Dudley is a daunting setting, there are definitely other bad vibes in the air, and Abbershaw with a “presentiment–a vague, unaccountable apprehension of trouble ahead” almost immediately senses that two “foreigners” who never leave the Colonel’s side are very unpleasant types who seem out-of-place with the rest of the company.

Well what entertainment is there to be had at night in a vast, forbidding mansion? Someone has the brilliant idea to play a game involving the Black Dudley Ritual dagger which was used to murder a guest back in 1500. Legend has it that the dagger “betrayed” the murderer by appearing to be covered in blood when placed in the guilty man’s hands. But nowadays, the dagger isn’t used in a superstitious way to discover a man’s guilt or innocence; it’s “degenerated into a sort of mixed hide-and-seek and relay race, played all over the house. All the lights are put out, and then the dagger is passed around in the darkness for a period of twenty minutes. The person left with the dagger at the end paid a forfeit.” And so the game begins:

At length the signal was given. With a melodramatic rattle of chains the great iron candle-ring was let down and the lights put out, so that the vast hall was in darkness save for the glowing fires at each end of the room.

It’s fairly easy to guess that something horrible is going to happen in the dark, but what isn’t so easy to guess is all that happens afterwards. Crime is blended with suspense and thrilling adventure, so this isn’t a standard who-dun–it.

Since The Crime at Black Dudley is the first Albert Campion novel, it would be reasonable to expect that this character takes centre stage, but no this is primarily Abbershaw’s story. There’s the sense, since Campion is not the main focus, that author Margery Allingham didn’t quite know what she’d created with this character. He comes off initially as a buffoon, a man who performs pathetic little magic tricks which seem to be more for his own amusement than anything else. That mask slips later on, and yet we still don’t know the real Albert Campion, a man whose talents and resourcefulness, under pressure, seem endless:

‘Well then, chicks, Uncle Albert speaking.’ Campion leant forward, his expression more serious than his words. ‘Perhaps I ought to give you some little idea of my profession. I live, like all intelligent people, by my wits, and although I have often done things that mother wouldn’t like, I have remembered her parting words and have never been vulgar. To cut it short, in fact, I do almost anything within reason–for a reasonable sum, but nothing sordid or vulgar–quite definitely nothing vulgar.’

This is a novel which features the upper classes of British society, so servants are mostly invisible and the one we see in any detail is as nutty as a fruitcake.  This is 1929, so German phobia–that dreaded “hun” reigns supreme, the women are frail creatures to be protected by the men, and the one bobby who appears towards the end of the book drops the ‘h’s in his speech. All these class, sex, and ethnic prejudices go with the territory, so they must be endured as relics of the age. I read some reviews by readers who found Albert Campion’s character annoying. I didn’t, but I will admit that I was a little surprised when he was initially introduced as a member of the party as he comes across as an upper-class twit, but this is a partially fake persona and Campion really comes into his own when things heat up.