In Disclaimer from Renée Knight, Catherine, a forty-something, married documentary film-maker has just downsized into a maisonette with her husband Robert. Prior to going to sleep one night, she picks up a self-published paperback, A Perfect Stranger and begins to read. Horrified, she realizes that the book tells the story of an incident that occurred years earlier, something she’s deeply ashamed of, and something she thought she’d hidden….

Chapters initially alternate (this changes as Robert is dragged into this drama) between Catherine and another narrator, Stephen Brigstocke, a widowed schoolteacher. I can’t say much more about the plot without revealing too much,  but I will say that chapter two reveals a very disturbed man who’s out for revenge. 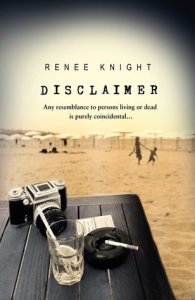 Exactly how these two people are connected : documentary film maker Catherine and the retired teacher is gradually parceled out in small segments of information over the course of the chapters. By about the halfway mark, you know the connection and you also understand it. I have to say that I guessed the connection (not the details) simply by process of elimination and a few clues tossed out there by the author to be picked up and pieced together.

Disclaimer is a domestic thriller of psychological suspense which capitalizes on the fear that something buried in the past will rear up and destroy the present. Early on, we realize that there’s some unspecified rot in Catherine’s marriage to Robert; his role as the supportive husband seems to be long-established as the man who recognizes what Catherine needs before she realises it. There’s a lot of give-and-take there with Robert giving and Catherine taking.

The novel rather cleverly emphasizes that Catherine is more worried about her marriage and her respectable, hard-earned reputation (as a film maker who raises social-consciousness) than she is about the author of The Perfect Stranger who is obviously someone who intends her violence. She’s so terrified that she plays down the danger. Catherine grasps that the story in the book has been fictionalized but she doesn’t perceive the very real threat posed to her–so while she’s worried about her marriage, we readers see the bigger threat barreling straight at her.

Taking the approach of a multiple narrative seems to be a popular approach in domestic crime books these days. This structure certainly provides a framework to move the story and the reader along, but it can also be frustrating and a little false in its delivery. I fall into the latter camp. I became annoyed with the structure and its frank manipulation when it came to parceling out information sometimes placed, it seemed, deliberately to mislead. Others may not feel the same way, and the story certainly is a page turner.

There’s not much more I can say about the book without revealing spoilers, so instead I’ll give a quote.

The whole experience left me with the sensation that I had reached down into a blocked drain and was groping around in the sewage trying to clear it. But there was nothing solid to get hold of. All I felt was soft filth, and it got into my skin and under my fingernails, and its stink invaded my nostrils, clinging to the hairs, soaking up into the tiny blood vessels and polluting my entire system.

I seem to be in the minority opinion about this book as most readers loved it, and here’s a more enthusiastic review from Cleopatra Loves Books.