Given my interest in books that send characters off on holiday, it was easy for me to pick up and read Catherine O’Flynn’s Mr Lynch’s Holiday. The title encapsulates the action perfectly, and yet it also gives the impression of a very light beach read, but there’s a lot more going on in these pages than the title implies. While most of the action concerns a group of ex-pats, post boom, who’ve committed financial suicide by electing to pursue a fantasy of life in Spain, this is essentially a story about compromise and how we make the best of what we have.

Dermot Lynch, a 76-year-old retired bus driver, hails from Birmingham but was originally from Ireland. Now widowed, he arrives in Spain for a fortnight to visit his son, Eamonn, who decided, along with his long-term girlfriend, Laura, to abandon the UK and telecommute from Spain. And why not? Property values were soaring, and there was a sense of everyone stepping into a new exulted societal status, so it seemed easy for Eamonn and Laura to take the plunge and move to Spain.

Their original plan had been for one of the big cities–Barcelona or Madrid or Bilbao. They had no interest in joining the hordes of expats clustered along the Costas in vast apartment complexes and chintzy hillside developments. Eamonn saw the majority of British settlers in Spain as an amorphous mass of Daily Express readers riddled with hypocrisy: railing against benefit cheats at home while happy to avoid Spanish tax; indignant at immigration levels in the UK but oblivious to their own immigrant status. These were people for whom Spain’s greatest cultural achievement was its tireless dedication to polished floors and gleaming kitchen worktops.

They spent a depressing two weeks in Barcelona, looking at a succession of tiny apartments with increasingly inventive layouts. Mildewed shower cubicles in the corner of bedrooms, toilets on balconies, a mezzanine bed platform suspended above the kitchen, and everywhere perky Ikea accents to mask the squalor.

When dreams or elaborate plans don’t pan out, many people have a way of hammering their dreams to fit reality–ignoring the clear warning signs that the dream is impossible and should be abandoned. And that’s exactly what happens here; Eamonn and Laura can’t afford Madrid or Barcelona and so instead buy one of the completed homes in a new, remote housing development:

The houses and apartments were described as minimalist cube structures with a nod to the principles and aesthetics of Bauhaus. Lomaverde claimed to offer all of the style and sophistication of city living but without the bureaucratic wranglings and complexity. Where Barcelona had been difficult and impenetrable, Lomaverde was easy and welcoming.

So here we are years later; Lomaverde is an unfinished ghost estate inhabited by a group of stubborn ex-pats who either won’t give up or who now cannot afford to return home. The community pool is empty and cracked, the post isn’t delivered regularly, and a road leading out of the estate ends suddenly, unfinished, dropping off into the harsh landscape. Eamonn and Laura both lost their jobs and Laura has returned to the UK. 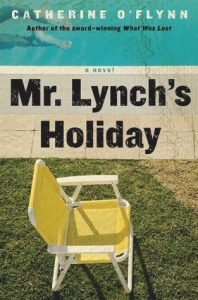 Visiting the deeply depressed Eamonn becomes a rescue mission for his father, and perhaps not too surprisingly, Dermot mingles well with the other ex-pats on the estate even though his son has withdrawn from everyone’s society and is wallowing in self-pity. Dermot is a great character, and as the plot continues we see glimpses of a young Dermot arriving in Birmingham, his history and some of his disappointments in life. The most balanced, socially conscious character in the book is Inga, a divorcee from Sweden who is strangely happy that Lomaverde failed:

“I came here expecting the same as everyone else. A new community, a fresh start in this beautiful place.” She lit another cigarette. “My marriage was over. Thirty years of trying to turn a blind eye, of thinking my husband would change. That felt like a mistake, a terrible waste of time. I thought I could come here and lose myself in a new place.

But imagine somewhere in which everyone is like that. So intent on happiness, on living a fairytale. They have not emigrated from places with no work and no money to a place with jobs and opportunities. No, they have left comfortable lives in search of somewhere even better. It’s a kind of greed, don’t you think. And if you’d have said that to me two years ago, I’d have said. ‘So what? why not be greedy for happiness? what’s wrong with that?’ “

Eamonn was always closer to his mother and dismissive of his father. With Dermot’s visit, he now learns things he never knew about. While I enjoyed Mr Lynch’s Holiday and I wouldn’t hesitate to read another book from this author, it does have IMO, two flaws: 1) the character of Eamonn is too weak. He’s so weak that he’s a complete disaster–from the inappropriate things he says to one of his internet ESL students to his drunken gropings of a fellow resident. No wonder Laura ran for the hills. 2) The ending regarding Eamonn is sewn up too ‘nicely’ and while Dermot’s decision makes sense, what happens with Eamonn is supposed to be a happy ending but in reality just opens the doors to more disaster.

Author Catherine O’Flynn is very generous and well-disposed towards her characters, so consequently there are no villains here. While one of the British ex-pats is an ethnocentric bore, most of the other people are just trying to take a day at a time and make the best of things in this bad situation.

There’s one great scene when the residents hold a homeowners’ meeting, and its formality is in direct inverse proportion to the chaos of the estate. One very poignant, very realistic scene focuses on grandparents who watch their grandchildren back in the UK via Skype. These sessions conclude with either the grandparents falling asleep or the grandchildren wandering off, forgetting that they have a live audience. The grandparents moved to Spain telling themselves that their grandchildren would be able to visit and have free accommodation, but with the children’s father unemployed, those planned holidays never come to fruition, and since Lomaverde is riddled with places up for sale (at savagely reduced prices), the grandparents are stuck and cannot return to the UK.

I closed the book, a gentle pleasant read, and contrasted it to Pascal Garnier’s Moon in a Dead Eye which is set in an estate with residents who’ve fled the city for a variety of reasons. Garnier, in his trademark way, is pitiless with his bourgeois characters who mostly live in a state of constant paranoia and fear that outsiders might break in. In Mr Lynch’s Holiday, the same theme occurs, but it’s handled in a gentler, much more generous way that’s slightly unbelievable, but that attitude may depend on how you see basic human nature.