The Birds of the Air: Alice Thomas Ellis

“Christmas was like a storm washing people to and fro to end up unwanted in each other’s homes.”

Christmas arrives regularly whether we are ready for it or not, and in The Birds of the Air from Alice Thomas Ellis, the celebration comes at an awkward time.  The novel covers a few days in December as three generations of one family converge on the home of the maternal grandmother, Mrs Marsh, a chirpy efficient woman who believes that ‘life must go on’ regardless of family tragedy, and as a widow she’s living proof of her fussy ability to cope.

Unfortunately, Mrs Marsh’s daughter, Mary, isn’t as resilient, and after the death of Mary’s son, Robin, “when it became clear that Mary could no longer live alone,” her mother insists that Mary should move in and be taken care of. While Mary “burned, as remote as a salamander in a blazing exaltation of grief, seeming to draw energy from what had devoured her,” Mrs Marsh’s mourning for her husband is relegated to one specific time of day:

she permitted herself to weep a little each morning in the bathroom before she put on her eyeshadow, but she knew and accepted what apparently Mary did not–that life had to go on. Mary had gone far, but had been wounded and forced to return; and her mother felt the ever so slightly spiteful vindication of the keeper of the cage. The bird had come back, if only to die.

The complacent living sometimes resent prolonged mourning, and that is certainly the case in the Marsh home, and here are the Christmas holidays which are supposed to be a time for celebrating:

she couldn’t suppress a feeling of annoyance with Mary’s Robin for being dead. The event had upset her daughter out of all proportion. Of course it was a dreadful thing to lose your loved ones, but life had to go on. What would happen if everyone collapsed?

Mary, apathetic and depressed, is in a strange twilight zone. She’s still in the world of the living but she longs to join Robin in death; she eats when she’s told to, but mostly she looks out at the garden and watches the birds, alone with her thoughts.

The sky had darkened when Mrs Marsh came back with lunch. She pushed the door with her bottom, balancing a tray covered with two cloths, one under and one over the food, lest germs should leap on it in the few feet between the kitchen and her child.

‘Why don’t you turn the light on?’ she asked, though if it had been on she would have asked why Mary hadn’t called her to do it, or remarked that too much light was bad for the eyes. Life had so treated her in recent years that she couldn’t trust it to itself for a second. A solitary magpie–vain, god-cursed bird, clad in eternal half-mourning-flew forever across her mind’s eye and had to be propitiated or cunningly foiled with constant changing and rearranging. By questioning and vigilance fate might be deflected.

Mrs Marsh is an admirable woman but lacking in the compassion department, and while The Birds of the Air is concerned with mourning, this is also a novel of manners, so complications ensue when Mrs. Marsh’s younger daughter, Barbara, her insufferable professor husband, Sebastian and their two children , Sam and Kate descend on the Marsh household. Sam, an awkward teenager, has just discovered that his father is engaged in a long-standing affair with ‘the Thrush,’ the wife of another professor. Much to Sam’s shame, his father and his mistress are a common long-standing joke amongst his father’s students. Barbara, on tranquilizers, a woman hardwired to cope rather like her mother, also discovers the affair during a Christmas party she is forced to host, but like her mother, she carries on and the family travel to the matriarchal home for Christmas. 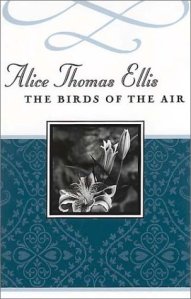 With birds and survival in nature as a central motif, Alice Thomas Ellis follows a few days in the lives of her characters. In the  human world, once we are fed and housed, our greatest challenges are emotional, and here we have a family headed by a woman who’s determined to put a cheery face on things despite glaring evidence to the opposite. The author wisely creates moments of sympathy for Mrs Marsh in the way she realizes she dislikes her son-in-law and the “faint weasel gleam of his smile.”

He made her think of hard roads under a film of rain, shallow and dangerous; of slugs and Nazis and the minister she sometimes met in the terminal ward of the cancer hospital when she was arranging the flowers ….

Mrs Marsh’s seeming lack of empathy is revealed as a fear of emotion and its assault on the respectable middle class security with which she surrounds herself. The perfect family Christmas is exposed as a torturous event with insufferable child, Kate, who obviously inherits her father’s genes, determined to be the ‘good child,’ so when she’s not showing up her rebellious brother, she’s spouting poetry. Meanwhile tensions between Sebastian and Barbara erupt as Mrs Marsh tries desperately to cover up all bad behaviour in front of her neighbours.

In spite of a theme of grief, this is an amazing, beautiful novel replete with sublime observations concerning Mary who manages to somehow, in her ethereal position, remain above some of the worst behaviour of Mrs Marsh’s guests. There are some very funny moments as Mrs Marsh struggles to conceal some of the uglier aspects of life as unexpected guests arrive. This is the fourth rereading of The Birds of the Air, and that should tell you how much I love this book.

She retired to the back room and opened the window. Dry flakes of snow drifted in, as ready and accustomed as doves returning to their familiar cote. She left the window slightly ajar to feel the cold after the heat of the front room, and told herself that alive or dead she wouldn’t undergo another Christmas. The year’s accumulated ill-will seemed always to find expression at this time. Relations who throughout most of the year had the sense to stay apart confined themselves in small spaces to eat and drink too much. And not content with this they felt it necessary to invite people who were lonely because they were unpleasant or boring and no one liked them. They had to be made to participate since it was felt that no one should be alone on this of all days.

The Summer House (made into a film)

The Inn at the Edge of the World

19 responses to “The Birds of the Air: Alice Thomas Ellis”