“The beginning of a murder, like the beginning of any other human enterprise, lies deep down in somebody’s mind-not necessarily in the mind of the person who actually kills.”

Murder of a Lady, another entry in the British Library Crime Classics series from Poisoned Pen Press takes us to a castle in Scotland, an aristocratic family ruled by tradition, a cast of characters who believe in local superstitions, and series amateur sleuth, a specialist in mental diseases, Dr. Hailey who takes snuff and sports an eyeglass.

Gloomy Duchlan Castle is the home of the Laird and his unmarried sister, Miss Gregor. Also living there are Mrs Eoghan Gregor, the wife of the heir–an army captain stationed in Ayrshire, their young son who is subject to fits, and a handful of old family retainers. Not exactly a list of people you would consider potential murderers, and yet murder does arrive when Miss Gregor is found, inside a locked bedroom with locked and barred windows, dead of a vicious wound. 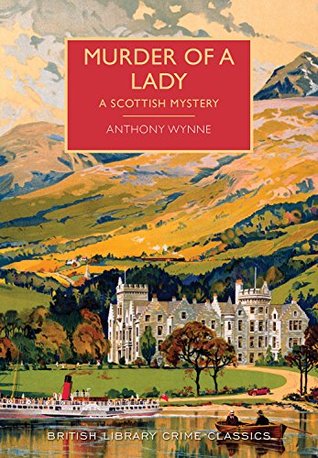 Dr Hailey is called to the scene of the crime, but when Inspector Dundas from Glasgow arrives, Hailey, who prefers to work alone (“my mind works on its own scents,”) and who doesn’t agree with Dundas’s “tactless” approach, backs off, but the body count rises, and Hailey finds himself deeply involved in an intriguing case. Hailey learns that while Miss Gregor possessed the reputation of a saint, now that she’s dead, an entirely new picture merges of a frustrated, childless woman who manipulated and controlled everyone around her. While she supposedly always acted from duty and on the perceived best interests of others, in reality, Miss Gregor inflicted her wounds in soft tones that soon grew unendurable.”

This is a ‘closed door’ mystery, and those who love the genre from The Golden Age of Detective fiction know what sort of complicated developments this story creates. In the case of Murder of a Lady, however, there’s also some wonderful psychological insights from our amateur sleuth as he makes observations about the crime and various suspects.

The really interesting crimes are those committed by people who, in ordinary circumstances, would have lived all their lives without apparent fault.

My method is always to proceed from the people to the crime rather than from the crime to the people. And the person I take most interest in, as a rule, certainly in the present case, is the murdered man or woman. When you know everything there is to be known about a person who has been murdered, you know the identity of the murderer.

My favourite character is Inspector Barley, also from Glasgow–a man with a thespian flair, an admirer of Napoleon, who spouts French and Latin, rubs his pipe on his nose and has a disconcerting appearance. Here’s Dr Hailey’s first view of Barley:

Barley, who wore a black-and-white check dust-coat of terrific pattern, looked like a shop-walker and spoke like a deayed actor in a Strand public-house, but he detected another quality and warmed to it. Inspector Barley possessed pleasant grey eyes; his brow was fine, square and massive and he had eloquent hands. What a pity that he had dyed his hair with henna!

In the introduction, Martin Edwards states that Murder of a Lady is “an excellent example of the ‘impossible crime’ mystery,” and that author Anthony Wynne is a “long forgotten master of this ingenious form of detective puzzle.” Wynne, whose real name was Robert McNair Wilson (1882-1963) was a physician in his real life, so it’s no coincidence that Wynne’s great creation, Dr Hailey, has the same career. Indeed there’s another doctor in the story, a Doctor McDonald, an amateur artist, and Hailey, who makes wonderfully insightful comments throughout the book, has this to say about McDonald:

The medical profession, he reflected, is full of men who wish, all their lives, that they had never entered it. Yet very few of these doctors succeed in making their escape because, through they possess the temperaments of artists, they lack the necessary power of expression or perhaps the necessary craftsmanship. A practice makes too many demands on time and strength to be bedfellow with any enthusiasm.

I guessed the perp but not the method of murder, but ultimately it’s the novel’s insights that make it such a delight to read. After finishing and really enjoying this gem, I went looking at the author’s backlist. Some of these used copies run into the $100s. I’m hoping that someone takes Wynne’s work to the kindle.