“This fact seemed to rule out a homicidal maniac.”

The Cornish Coast Murder opens with two old friends, the Vicar of St Michael’s-on-the-Cliff and Doctor Pendrill meeting, one stormy night, at the vicar’s home for their regularly arranged dinner and chat about crime books. The two men take turns to send a list of six crime books to the local library; these books are delivered, carefully packaged, in a crate, and the doctor and the vicar undergo “a division of the spoils,” with a swap mid-week, so that both men read all six crime books before sending off for the next order. The two men, both bachelors with housekeepers, have diametrically opposed philosophical positions to life, but in crime, there’s a meeting of the minds.

For years the Doctor and the Vicar had indulged this vicarious though perhaps perfectly common lust for crime stories. It was one of the jokes of the parish. They made no attempts to hide their common admiration for those authors who, with spider-like tenacity, weave a web and expect the poor, harassed reader to disentangle the pattern and follow the single thread back to its original source.

The book opens very strongly indeed with the vicar opening the box of books and delightedly pawing over the contents:

“A very Catholic choice,” he concluded. “Let’s see now–and Edgar Wallace–quite right, Pendrill, I hadn’t read that one. What a memory, my dear chap! The new J. S Fletcher. Excellent. A Farjeon, a Dorothy L. Sayers and a Freeman Wills-Croft. And my old friend, my very dear old friend, Mrs. Agatha Christie. New adventures of that illimitable chap Poirot, I hope. I must congratulate you, Pendrill. You’ve run the gamut of crime, mystery, thrills and detection in six volumes.!” The Doctor coughed and puffed earnestly at his pipe.

Bude very cleverly draws us into the action with this scene. He withholds the titles of the books, but the pleasure felt by the vicar also ripples through readers who can so easily share the vicar’s anticipation of a good week of reading ahead. Of course, Bude has also, by this point, introduced the fact that nothing ever happens in this sleepy “isolated” village of Boscawen which boasts a population of “some four hundred souls.” 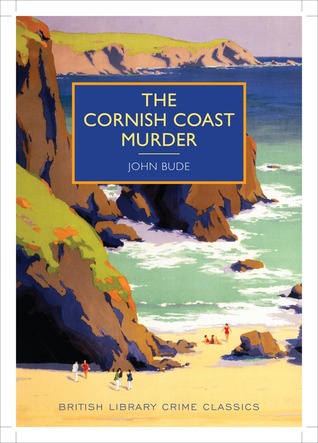 Even the way that the meal is announced, by the sound of a gong, underscores the idea that nothing ruffles the harmony of routine, so of course, any self-respecting reader of crime fiction knows that the peaceful ambiance of this Cornish community is about to be ripped apart. Everything changes when a call comes for Doctor Pendrill from the panicked Ruth Tregarthan who finds her uncle shot dead inside his clifftop home, Greylings. The circumstances of the crime leave some clues but also create some unanswerable questions. Poor Grouch, the local policeman, who valiantly cycles through rain and storm, is soon replaced at the scene of the crime by  Inspector Bigswell and his uniformed chauffeur.

Bigswell, pressured to solve the crime or accept the intrusion of Scotland Yard turns to the vicar for advice, and of course, the vicar is only too happy to indulge his love of crime. Apart from Ruth Tregarthan, most of the other characters can’t hide their glee that there’s a murder to investigate, but occasionally, the vicar does the appropriate thing and reminds the reader that a tragedy has occurred.

The camaraderie between the vicar and the doctor, the novel’s great strength, is great fun. Crime detection, as portrayed in this novel, favours the wealthy while the female characters are weak or prone to hysteria. Ruth, due to some unexplained behaviour, quickly becomes a prime suspect, but she’s treated rather like a pampered child by the Inspector who takes the stern fatherly role.

But there it was-a woman in love was always a foolhardy and unreasonable creature, though not devoid, as the Inspector realized, of a certain inspired cunning.

The Cornish Coast Murder is another crime novel that’s been out of print, now resurrected for fans by The British Library Crime Classics series. There’s nothing new added to the genre, and while this isn’t one of the strongest entries in the series, neither is it, with the addition of the relationship between the vicar and the doctor, the weakest.  John Bude (Ernest Carpenter Elmore) 1901-1957 was a writer of Fantastic fiction before he tried his hand at crime, and The Cornish Coast Murder was his first crime novel.