“That’s what happens to people who go out at night. Just look how they end up.”

I’ve posted previously on the crime books from Pushkin Vertigo. So far there have been some marvelous reads for crime fans: She Who Was No More, Vertigo, The Disappearance of Signora Chiara and several Frédéric Dard titles (all highly recommended by the way). Vertigo has also released a number of a number of novels from Augusto de Angelis–all much more standard police procedurals. Given the rather dramatic division between the book types (makes me think of Simeon’s Romans Durs vs. his Maigret novels), I’ve formed two figurative piles of books with the Augusto de Angelis on the left and all the other Vertigo titles on the right. That brings me to Death Going Down (original title: La Muerte Baja en Ascensor) from María Angélica Bosco–a police procedural that I’m going to place in the left stack with the Augusto de Angelis novels. However, I’ll add a caveat to that decision later. 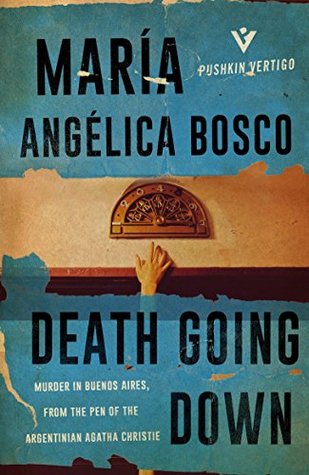 Death Going Down opens on a cold night in Buenos Aires as Pancho Soler arrives home drunk to his apartment house. It’s an atmospheric scene as Soler stumbles from his car into the lobby of the building. He has just three minutes of light in the lobby (a regulation we’re told) and he makes it to the lift but sees it’s already in use.

All of a sudden he noticed that the lift shaft had filled with light and at the same moment, as if choreographed, the lobby plunged into darkness.

Someone had come down in the lift. He could make out a blurry shape on the other side of the door. Still leaning on the wall, Pancho moved to one side to make way for the person in the lift but the door remained stubbornly closed. All he could see was the shadow puppet outline of a shape curled up in the corner.

I don’t think I’m giving anything away to say that Soler opens the door and discovers a dead blonde in the lift. The police arrive, the residents gather, and the investigation begins. …

Death Going Down, a prize-winning crime novel, was published in 1955, and the story’s emphasis is the duplicitous lives lead by those in the apartment house along with the idea that the investigation is clouded by the number of immigrants involved. These relative newcomers to Argentina from Europe have lives shrouded in mystery. Are they victims of the nazis fleeing for their lives or do they have pasts they wish to escape from? And herein lies my hesitation in placing Death Going Down in that figurative left pile of Vertigo titles. Yes it is a police procedural but the refugees & immigrants, flotsam and jetsam from WWII still bring the war to Argentina’s shores a decade later, and that’s a nice twist.

There’s a solid assortment of suspects: playboy Pancho Soler, Dr Adolfo Luchter, caretakers Andrés and his bitter wife, Aurora Torres (she hopes the murder victim is the resident she likes the least,) the invalid Señor Iñarra and his family, the abrasive Bulgarian (former resident of Germany) Czerbó and his long-suffering sister Rita, and of course, the murder victim’s husband who married his wife by proxy.

There are three police figures in the book: Inspector Ericourt, Superintendent Lahore, and detective Blasi (my favourite of the three). That’s rather a lot of policemen for a 160 page book, and the result was that I was unable to get a firm grasp on any of their characters–although Blasi is the strongest drawn of the three. Here’s his approach to crime:

What do you do when you’re standing in front of a painting? You adopt different positions until you get the best perspective.

These days a common complaint about crime books is that they are too fleshed out with extraneous detail. In Death Going Down,  the opposite is true, and while I can’t give away spoilers, the plot would have benefitted from further explanation of the past connections between the characters.

Finally, the author made mention of what happened to the victim’s dog, and this was a nice little touch to the tale.