Karolina Ramqvist’s moody novel, In the White City, takes us into the life of a young woman named Karin who finds herself in a life she never imagined. When the novel opens, Karin is living in a huge lakeside home bought for her by her criminal boyfriend, John. John is gone, presumably (?) in prison and Karin, feeling bitter and betrayed, is left with their baby Dream, the child that John pushed for against Karin’s nagging feelings that having a family was not a wise move.

Karin, alone in the rambling house with just the baby, has just a few days before she is to be evicted. The utilities have been cut off and the house is freezing. She has nowhere to go, the little cash she has is running out, and the friends she thought she had from John’s criminal gang have evaporated when times got tough. The police and the tax authorities have documented the house’s contents and Karin faces a crisis that she is completely unprepared for. 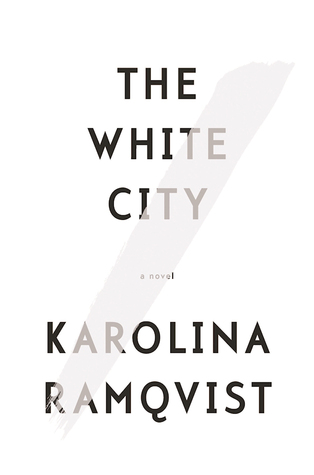 This is a short novel, moody and depressing which nonetheless manages to incorporate a dreamlike quality into its style. This is a white world (as the title suggests). The house is cold and unwelcoming, and it’s surrounded by a frozen world of snow and ice, but there’s also a sense of blankness in Karin’s mind. She’s stunned by events and unable to cope.

Karin reaches out to a number of people for help–some of whom appear sympathetic and some who do not. Meanwhile she lives in a haze of depression, foraging in the house for food, and neglecting her baby.

The book’s blurb mentions “the coke-filled parties, seemingly endless flow of money, and high social status she previously enjoyed.” Scant reference exists of Karin’s former life, and I would have enjoyed knowing a bit more. When the book opens, everything has changed and not seeing how things were before, gives us little point of contrast, little point of loss. I was reminded of series 1 of Prisoners’ Wives and the glory stripped from Francesca Miller, but in that series we see Francesca’s fall from affluence each step of the way. Francesca finds her own worth in the series, tries to work a ‘normal’ job only to be dragged back in the Life. In The White City, it’s the aftermath of the party and Karin is left with the mop-up.  There’s no such character development here–just a woman floundering in hopelessness.

The novel is strongest when describing the police who visit the house and deliver the news that Karin must leave:

And then they moved deeper inside the house. With quiet purpose. Greedily. Even if this was a purely routine call, they approached their plunder with an ill-concealed excitement. They stared in hot silence through her dirty windows, drinking in the view. Her view. They turned around and stared at the fireplace; its little white remote control was on the coffee table even though the gas had run out and it could no longer be lit. They looked at the painting on the far wall, her painting, the one she’d assumed was stolen when John gave it to her.

They had already sent an appraiser around, who’d gone through everything.

The descriptions of the landscape are excellent, and while the novel’s mood and atmosphere are well created, there’s just too many endless references to breast feeding that added nothing to the story, nothing to the plot. Karin is still in shock, her senses dulled and blunted. All this is conveyed well, but it is continual and after a while (and a visit from the Pizza guy) we realise that Karin must stop wallowing in the mess that landed on her doorstep and come to her senses. We get tiny glimpses (and I wish there had been more) into Karin’s former life–the bullet proof glass in the lakeside house, for example. Details of Karin’s former life infuse energy into this otherwise bleak, depressing tale:

Everything had been documented, every one of her purchases, each step she’d taken, or so it seemed. Pictures of her on airplanes and at the watchmaker. Tickets to Thailand and Brazil, gym memberships, dermatologists, timepieces, jewelry, cars. boats. The dog and the horse each had their own column.

Translated from Swedish by Saskia Vogel