“My type can’t afford to have anything to do with your type except in dreams.”

The Lady in Mink is a lesser-known novella (also known as The Murder in the Stork Club) from Vera Caspary, the author of  Laura. I read The Secrets of Grown-Ups Caspary’s autobiography a few years ago, and found a lot to admire and like in this remarkably strong, interesting woman. So I’m slowly reading Caspary’s work that remains in print, or is at least available:

The Man Who Loved His Wife

The Lady in Mink is a fairly standard detective story which centres on the poisoning death of playboy Henry Pendleton. Henry, “the double-L type, ladies and liquor,” spent his last night at The Stork Club, mingling with celebrities and various women from his past. He became violently ill, and on the way home in a taxi cab, he died. Police Captain Mulvoy suspects that Henry met his murderer in the club, and that he was slipped the poison in plain sight. Henry, who was about to publish a book which included old love letters, had dinner that night with a mystery woman in mink. She’s now disappeared. Who was she, and is she the killer? 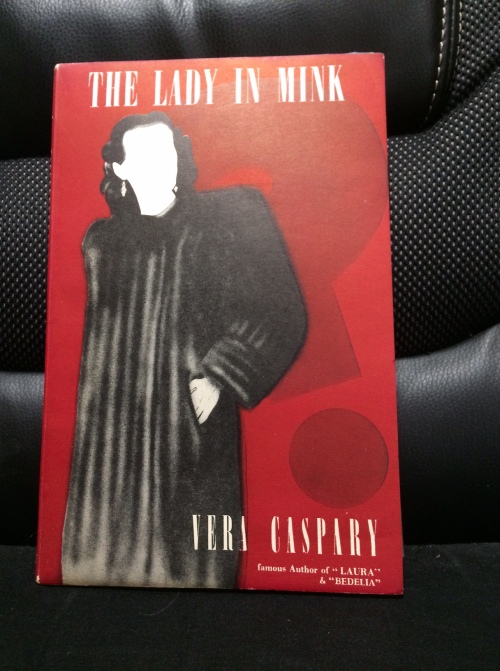 Private detective Joe Collins takes on the case and proceeds to worm his way into the club and into the lives of the main suspects. There’s Henry’s ex-wife Dorothy, Maggie, a former girlfriend now engaged to a millionaire, and the mystery woman in mink.

“First-class, gilt-edged gold-digger” Maggie is a disarming combination of “artlessness” and artifice. Her “earnestness and shy pauses had the effect of calculation.” She appears to be reading War and Peace, but Joe isn’t sure if she’s reading it or if it’s an “adornment.” Pendleton’s ex wife, Dorothy mentions her psycho-analysis moments after meeting Joe: “She seemed to regard psycho-analysis as some sort of adornment like a permanent wave.”

The Lady in Mink is a snapshot of its time. Name dropping of celebrities who visit the club is interspersed with the fascination with mink coats. Every woman either has one or wants one. The murder investigation puts Joe’s marriage to the test. Joe Collins begins to question his wife, Sara’s fidelity and also, after catching her in a number of lies, whether or not he can trust her. Sara writes for radio and makes $500 a week. Joe doesn’t make nearly as much money, so Sara is the main breadwinner, and that causes tensions which float to the surface during the murder case. The investigation takes Joe into the world his wife left behind: a world of champagne, gold cigarette cases, and mink coats.

This isn’t Caspary’s best work, it’s not nearly so well crafted as either Laura or Bedelia, but it’s entertaining enough with some snappy lines thrown in.

Good Housekeeping hired Caspary to write the story, The Murder in the Stork Club. My copy was published in 1946 in the UK, so The Lady in Mink may have been the British title.