“In a quarrel, the origin is not of any consequence.”

I’ve seen a couple of versions of The Corsican Brothers: The Douglas Fairbanks Jr. swashbuckler version 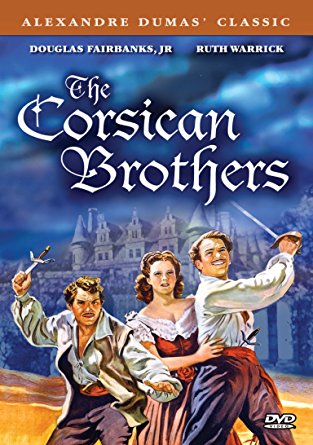 and the crude, hilarious Cheech and Chong version: 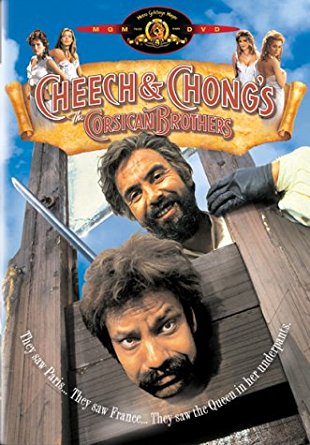 And that brings me to the source material: the novella from Alexander Dumas.

It’s 1841. The story begins with our narrator, a Frenchman who is journeying through Corsica, explaining the custom of claiming a night’s free board and lodging just by picking the “most commodious house,” and explaining you’re a traveller. The narrator (Alexander) explains this is seen by the owner of the house, as a honour, since you’ve picked his house out of the entire village.

Sounds like a bit of scam to me. Imagine trying to pull that these days.

Anyway, Alexander travels to Sullacaro, and notices that all of the houses seem fortified. In some of the houses, the windows are bricked up, or “guarded by thick planks , provided with openings large enough to pass a gun through.” The narrator selects the house that looks the finest but oddly enough is the only house that is not fortified. This is the home of the widow Savilia de Franchi, a woman about 40 years old, the mother of 21-year-old twin boys: Lucien and Louis.

Fortunately for the reader, the narrator is the sort of person who is interested in his surroundings. He’s given the room which belongs to the absent son, Louis, who resides in Paris, training to be a lawyer. It’s obvious from the room’s contents that Louis is a great admirer of all things French, and then the narrator meets Lucien, his brother’s opposite. In childhood, it was impossible to tell them apart, but now Louis wears French clothing, reads French books, while Lucien is deeply Corsican.

While Louis’ room is full of French books, Lucien, now an arbiter between warring factions, is more into weaponry. He  has an impressive arsenal which includes a dagger owned by the legendary Sampiero.

The narrator spends a day with Lucien who negotiates a truce to end a vendetta between two families–a vendetta which started over a chicken.

A hen escaped from the yard of the Orlandi, and flew over into that of the Colonna. The Orlandi went over to claim their hen, but the Colonna refused to give it up, claiming it as their own; the Orlandi then threatened to take them to a justice of the peace. The old mother Colonna, who kept the hen in her hands, then twisted its neck, and threw it in her neighbor’s face saying, ‘Well then, if she belongs to you, eat her.’ One of the Orlandi then picked up the hen, and was going to strike the offender with it; but at that moment, one of the Colonna, who, unfortunately, had a loaded gun in his had, took aim at him, and shot him dead on the spot.

And how many lives have now been paid for this scuffle?

There have been nine persons killed altogether.

And that for a wretched hen worth only twelve sous.

No doubt the hen was the cause; but as I have told you already, it is not the cause, but the result you must look at

Over the course of his stay, the narrator learns that the two young men, Louis and Lucien are deeply bonded, and when one falls ill or is distressed, the other twin feels it, hundreds of miles away. Then the narrator returns to Paris and meets Louis. We see scores settled, and the way two cultures settle those scores:

not after the Corsican fashion, from behind a hedge, or over a wall. No, no, but after the French manner, with white gloves, a shirt frill and ruffles.

Once the stage is set, a fairly predictable course of events take place, and since this is an action-based vendetta story, there wasn’t any room for character development. Still I enjoyed the story for its strong Corsican bent, and the idea that twins possess an unearthly bond.