“The wheel was coming full circle.”

Pierre Lemaitre’s novel, Three Days and a Life is essentially a study of guilt, the fallout of violence, and small town prejudices in the aftermath of a murder. Murder is an irrevocable act, and the consequences, as we see in this novel, are unpredictable. The story begins in 1999 with Antoine, a twelve-year-old boy, the son of the divorced Madame Courtin. Antoine and his mother live in the small, dying town of Beauval–a place where everyone knows everyone else. You can live there for years and still be an outsider.

Antoine is a normal twelve-year-old who longs for a Playstation of his own, and with a sudden awareness of his own sexuality, he has a crush on blonde Émilie. The Courtins live next to the Desmedts: the brutish Monsieur Desmedt, his wife and two children: Valentine and 6-year-old Remi. The Courtin household is rigid whereas the Desmedts’ home is chaotic. but the best thing about living next to the Desmedts is that Antoine can play with their dog Ulysses. 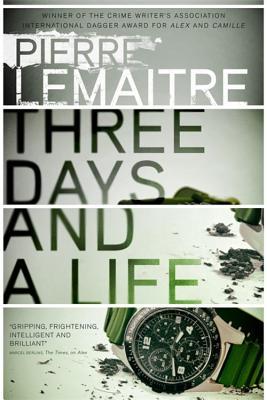 One day in the woods, Antoine accidentally kills Remi, and in a blind panic, he hides the body. Will he get away with murder? ….

About 2/3 of the book follows Antoine’s actions as the townspeople realise that a child is missing. Paralyzed with guilt, and waiting for the police to knock on his door, Antoine watches events unfold from his home. Unpopular residents are rounded up and questioned, and then nature intervenes.

The second, last third of the novel opens in 2011. Antoine now lives in Paris, is in a wonderful relationship, and is close to becoming a doctor when he reluctantly agrees to return home He is being recalled by fate to meet his punishment. ….

Truth be told, the terror never went away. It dozed, it slumbered, and it returned. Antoine lived with the knowledge that, sooner or later, this murder would catch up and ruin his life.

I’m very glad to have finally read a Lemaitre novel. For this reader, the first section with Antoine as a boy was good but overly long–especially when he repeatedly imagined various scenarios. However, the second part paid off in its conclusion. To say more would spoil the novel for other readers, but Fate shows, once again, that one cannot escape, no matter how hard we try to run. In the case of Lemaitre’s tale, do not expect simple retribution. The plot is far too subtle for that.

Reading the acknowledgments, I saw the name Patrice Leconte pop up. This made me mull over the idea of this book as a film. The first two-thirds are introspective while Antoine wrestles with his guilt, but with the right script, this would make an excellent film.

12 responses to “Three Days and a Life: Pierre Lemaitre”