Over the years, I’ve read a number of short stories, and a few from Laurie Colwin, Margaret Atwood, and A.M. Homes stick in my mind. Homes seems to excel in creating people who behave badly, and that brings me to Days of Awe, a collection of twelve short stories 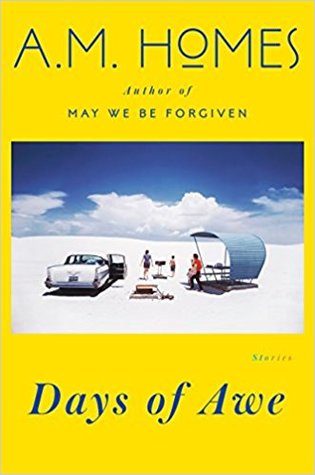 In the first story, Brother on Sunday, a middle-aged plastic surgeon on holiday with friends from his youth ruminates about his career, his relationships and his own mortality, but the holiday ends with a confrontation with his brother, dentist, Roger. While he wonders if he’d still make friends with his current crowd if given the choice, the bigger question is how much will he take from his brother. This story captures the tone of a successful man who is content with his place in life, comfortable with his choices and yet is disengaged and left an observer. We are inside the mind of a plastic surgeon at the beach as he clinically assesses the bodies of strangers around him:

In front of them, a woman is stepping out of her shorts. One side of her bathing suit is unceremoniously wedged in the crack of her ass; she pulls it out with a loud snap. Her rear end is what Sandy calls “coagulated,” a cottage cheese of cellulite, and, below it spider veins explode down her legs like fireworks.

“Do you ever look at something like that and think about how you could fix it?” Terri asks.

“The interesting thing is that the woman doesn’t seem bothered by it. The people who come to me are bothered by their bodies. They don’t go to the beach and disrobe in public. They come into my office with a list of what they want fixed–it’s like a scratch-and-dent shop.”

In the second, complex story, Whose Story Is it, and Why Is It Always on Her Mind? a Jewish writer attends a conference on genocide. The “transgressive” fiction writer, Rachel, finds herself on a panel which is like “a quiz show with points awarded for the most authentic answer.” As questions bounce around, the writer’s authenticity, and lack of direct experience, is challenged.

Despite the fact that these panels are supposed to be conversations, they are actually competitions, judged by the audience.

The writer strikes up a relationship with Eric, a war correspondent. While the story pivots on this relationship, undercurrents include the survivor’s need to vocalise witnessed horror, or “relentlessly collect and catalog the personal effects of those who disappeared.” And what of Eric who acknowledges that there’s “something wrong” with him and the compulsion to travel to the world’s nightmare atrocities, “having to go back, again and again,” as though he “needs to be punished.” In spite of the fact that Rachel has a girlfriend, left at home, she embarks on an unpredictable relationship with Eric.

Several of the stories are set in California including Hello Everybody, a story in which Walter returns from university to his friend Cheryl’s posh home in Southern California. This is a glimpse into the world of perpetual California makeovers: Walter wears thick makeup to cover his acne, Cheryl sports a new tattoo and her white, white teeth are the result of a “crushed-pearl polish.”

They are forever marking and unmarking their bodies, as though it were entirely natural to write on them and equally natural to erase any desecration or signs of wear, like scribbling notes to oneself on the palm of the hand.

They are making their bodies their own–renovating, redecorating, the body not just as corpus but as object of self-expression, a symbiotic relation between imagination and reality.

The story’s blurb describes this as an “anthropological expedition,” and it really is. These are “pool people.” Cheryl’s mother, Sylvia, is dealing with the fallout of having her eye colour changed, and the scenes when the entire family (and Walter) go out to a fancy restaurant for dinner where “they serve tiny, designer-size macrobitoic bites” is hilarious. Sister Abigail is anorexic and demands ten calories per menu item. Cheryl is, of course, in constant therapy and at one point she asks her therapist (in an inversion of the usual question) if it’s her fault that her parents are still together. The same family appears again in She Got Away. I would love an entire novel about these people.

And if we’re talking about California, how could Disneyland be neglected?  The Last Good Time is set in Disneyland, and while the story’s protagonist is unappealing, the plot intrigued me. This is the tale of an adult man who, on the brink of losing his grandmother, decides to take off to Disneyland and capture the last good memory of his childhood. The story resonated as I’ve known many people who make monthly, quarterly, semi-annual, or annual pilgrimages to Disneyland for a range of reasons: sentimental/honouring the dead/treasuring childhood memories etc., and it’s a concept I had to get my mind around.

Not all the stories worked for this reader (The National Bird Cage Show, Your Mother Was a Fish), but that didn’t impact my great enjoyment of the other stories. Reading Homes is like tasting a flavour you’ve never had before. Wonderful.