Late in the Day: Tessa Hadley

“Isn’t it impossible, though, anyway, to love someone all the time?”

When Tessa Hadley’s novel Late in the Day opens, Alexandr is married to Christine. They have an adult daughter together, Isobel, and Alexandr has a son, Sandy, from a previous marriage. Lydia and husband Zachary have a daughter, Grace, who is an art student in Glasgow. Alexandr and Zachary are long-time friends, and Christine and Lydia, in spite of being polar opposites, are also girlhood friends, but to add to the entanglement of these two couples. Lydia and Christine also babysat Alex’s son when he was married to his former wife.

Ok, so now we have that straight.

Late in the Day opens with the sudden, unexpected death of Zachary. Christine receives a phone call from Lydia and she dashes off to the hospital, scoops up Lydia and brings her home. We all grieve in different ways, and Lydia is in a state of shock when she makes the call to Christine, and yet … there’s something about Lydia that rings warning bells. Does Christine hear? Christine’s first instinct is to guess that Lydia “would be made more domineering somehow by the blow of Zachary’s death.” 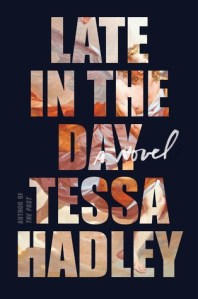 Gregarious art gallery owner Zachary is dead when the book begins, but as the novel delves into the past, tangled relationships of these four people, we see him as a rather larger-than-life personality, so his death leaves a hole behind in the lives of the survivors.  Grace acknowledges that “of all of us, he’s the one we couldn’t afford to lose.”  With Zachary’s sudden death, Lydia seems at a loss to move on, and while this is perfectly natural given the circumstances, there’s something not quite right going on here. We learn how Lydia, as a young girl was fixated on Alex, but how he barely noticed her.  Eventually Alex married Christine while Zachary fell for Lydia.

While funeral arrangements are made, Lydia stays with Christine, and an uncomfortable sensation begins to build which begins with Lydia taking over so much space with her make-up. Lydia appears to be a high maintenance person which probably explains why Alex avoided her years earlier, but now there are undercurrents in Alex and Christine’s marriage, perhaps fueled by frustrated career ambitions, that open the way for turbulence.

Now Lydia set out her brushes and mirror and all the apparatus of her make-up and skin care on top of the chest of drawers: pots and tubes of cream, lipsticks and eye-shadows spilling from bags that were pretty curiosities in themselves, embroidered and patterned zip-bags, or pouches with tasselled silk drawstrings. She draped the mirror and the chair backs with her jewellery and scarves, and the room began to smell of her perfumes. Soon all the surfaces and the floor space were cluttered.

I liked the premise of the novel, and it’s certainly well-written, but found it hard to care for the characters who seem uninteresting in spite of tantalizing details. Alex, for example, was a poet who gave up and went into teaching. He eventually made headmaster but decided to return to the classroom. Then there’s Christine who keeps her workroom locked and the key hidden. As the history of these four people is gradually revealed I found myself saying wondering what on earth Christine expected. But then perhaps the outcome wasn’t so ‘accidental’ after all.

The novel is strongest in its portrayal of marriage as a shifting, organic entity, and the trickiness of female friendship which seems to be laced with undercurrents of competition. Christine and Lydia have a shared history but little else in common. Lydia is a bird-of-paradise, and Christine is “used to being bruised by Lydia.” Here’s Christine talking to Lydia about marriage. Christine’s daughter, Isobel is about to leave for university and she anticipates the emptiness created by her daughter’s absence.

-Something’s over, though. I didn’t think it would be over so quickly. It felt so monumental and permanent, when it began. You’d think this was something a woman would feel, wouldn’t you, who had no life of her own and had invested too much in her children. But there it is.

4 responses to “Late in the Day: Tessa Hadley”