“You never realise how much you detest your kids until you take them somewhere.”

When A Working Mother opens, mother-of-two, Betty decides to return to work. It’s a decision based on need, and as Betty tells her husband Adam, “we need money. The kids need clothes, apart from the fact that we like to eat.” For the record, Adam doesn’t work and seems to be maladjusted, according to Betty, from his war experiences. Betty’s decision to get a job, while practical, just becomes another weapon in the arsenal of marital skirmishes. Their bitter marriage is full of recriminations, but there’s one thing Adam and Betty agree on: Booze. Drinking is their only shared interest, and their social life is composed of ditching the kids, going to the pub and boozing it up with Adam’s best friend, Brendan. It shouldn’t be surprising, then, to learn that a great deal of Betty’s wages go towards alcohol. 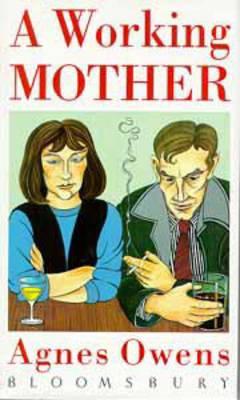 But back to Betty’s search for work. … She contacts the mysterious Mrs Rossi, the fortune-telling owner of an employment agency, and in spite of having no experience in the legal field, Betty is temporarily employed by an elderly lawyer, Mr Robson. Although there are several women in the typing pool, he favours Betty–perhaps it’s something to do with the fact that he fondles her and discusses his book which is a study of “human behaviour in animals.” Mr Robson soon wants to know how the war affected Adam sexually, and then he offers Betty a permanent job. She’s invited to his home to do extra typing on the weekends.

Betty’s life (and story) is split between work where she hits Mr Robson up for money, her home life: fighting with Adam and ignoring the children, spending time with workmate Mai, and Betty’s surreptitious trysts with Brendan. Yes, he may be “backwards,” and have greasy hair, but Betty has chosen him for a lover. Perhaps access is the main reason for her choice. Betty is the driving force in this relationship, and naturally Mr Robson is fascinated by this aspect of Betty’s private life:

“Sorry I’m late,” I said to Mr. Robson, smoothing down my crumpled blouse. “I’ve had a terrible weekend.”

“Dear, dear,” he said. He was reaching up for a book on one of the sleeves called The Joys and Fears of Extra-marital Bliss.”

Gradually we see Betty is an unreliable narrator. On one hand, Adam is supposedly damaged by the war, but then she admits at one point, they married right after he was released from prison. Mai certainly seems to have a different opinion of Adam. And what about Mr Robson? Is he getting his thrills at Betty’s expense or is he being exploited?

The activities of this deluded old man made me want to puke. It seemed I had displayed my soul to him for a few paltry pounds. On the way home I calmed down. There was no harm done really. I would display a lot more than that if the price was right.

I’ve read a few books by Agnes Owens and thoroughly enjoyed them all. Betty is a wonderful narrator: tart, bitter, self-promoting–this is a woman who is having sex with her husband’s best friend, a youth with diminished capacity. She’s a neglectful, disinterested mother, a backstabbing, false friend, a worker who extorts from her employer, and as the story develops, she sinks into a seedy, possibly fabricated, version of events. Is she a victim or the instigator?

As for Mr. Robson, I have done nothing to be ashamed of, nothing that anyone can prove anyway, and as for Brendan, if I’ve done anything to be ashamed of it was more out of pity than anything else. Surely it is only fair that I leave all this confusion for a better life. After all, we’re only here for a few fleeting moments, as Adam often says.

Darkly funny, this is a twisted look at subversive female behaviour. A Working Mother should appeal to fans of Beryl Bainbridge.