“He did not foresee that, all through his life, he should be condemned to drag about, in the same silly way, a blue cage, the color of illusion, and a green parrot, the color of hope!” 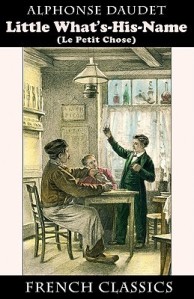 Little What’s-His-Name is Daniel Eyssette, and the story opens with his birth. Daniel, one of three sons, is born in Languedoc, to a successful man who owns his own silk factory.  Daniel says he was his “parents’ unlucky star,” as right after his birth “incredible misfortunes assailed them from all quarters.”

First there was the customer from Marseilles who stole 40,000 francs, then two fires, a strike, a family quarrel, a lawsuit, and the coup de grace … the Revolution of 1848.  Within a few years, the business is finished and the family leave the factory and their splendid home and move to Lyons (Daniel/Little What’s His Name loses his beloved parrot on the way.) Chapter II is called The Cockroaches for the family’s humble home is plagued with the insects who proceed to make hell for the Eyssettes.  The education of the two youngest boys, Jacques and Daniel, takes a hit due to lack of funds, and the boys attend a school for choirboys. Later a scholarship is offered for one of the boys and the father, who doesn’t seem to think that highly of Jacques, selects Daniel.

It’s a rather sad childhood marked by death, poverty, and memories of a better life. But there’s worse to come; within a few years, with their fortunes tumbling even further, the remaining members of the family split up with “each one to seek his fortune independently.” Daniel is sent off to be a schoolmaster thanks to the recommendation from a family friend.

By this point, Daniel has earned the name “Little What’s-His-Name” thanks to his diminutive size and I’m guessing also because of his ability to sink into the background. Working at the boys’ school is hell for Daniel as he’s smaller than the bigger students, but at least he gets half a bottle of wine at meals!

It’s at the school that Daniel learns some painful life lessons. Daniel is trying hard in his job, and likes teaching the younger boys, but he runs into problems when he punishes the unpleasant son of a Marquis. This incident, with its humiliating results, throws Daniel into bad company at the local inn. It’s a bitter experience to learn that the man you thought was your friend is using you and considers you an idiot, and that’s exactly what happens to Daniel. Without giving away arguably the best part of the plot, Daniel finds himself in Paris.

The first section of the book is the tale of Daniel’s early life and the time spent at the school. The second half concerns Daniel’s move to Paris (he lives with Jacques) and his attempts at a literary career.

Daudet has the habit of moving, in his narrative, from first person to third which I found a little odd. This seems to be driven by sentiment/emotion when Little What’s His Name is embroiled in an emotional scene or is humiliated. Almost as if Daudet is only comfortable imparting these scenes when moving further from the character.

The man with the mustache looked like a good fellow; on the way I learned that his name was Roger, that he was a teacher of dancing, riding, fencing, and gymnastics in the school of Sarlande, and that he had served for a long time in the African light horse. This was enough to make him entirely attractive to me. Children are always inclined to like soldiers. We separated at the door of the inn with much shaking of hands and the explicit promise of becoming friends.

And now, reader, I have a confession to make to you.

When Little What’s His Name found himself alone in his cold room, in front of his bed in that strange and vulgar inn, far from those whom, he loved, his heart burst, and the great philosopher weep like a child. Life terrified him now, he felt weak and helpless to meet it. He cried and cried.

I enjoyed the first half of the novel far more than the second half. The first half is powerful in its depiction of the innocence of youth, the battering, humiliating experiences that must be endured, and painful lessons regarding treachery. The second half lacks the same power. It’s too sentimental for my tastes, and that’s the problem with using autobiographical material. My copy comes from Mondial books with an introduction from W P. Trent who was also the translator,