“An hotel, you know, is a great place for friendships.”

It’s 1920, WWI is over, and a motley assortment of British travelers find themselves in a hotel on the Italian Riviera. With each new arrival, the guests shift into different formation, adding and subtracting people into various groups. There’s Mrs Kerr whose languid presence and “vague smile” dominate a certain set. She’s always perfectly calm, and young Sydney Warren, who travels with her cousin Tessa Bellamy, spends far more time with Mrs Kerr, observing Mrs Kerr or looking for Mrs. Kerr, than attending her cousin. There’s Miss Pym and Miss Fitzgerald who travel together, room together, and have spats. Then there’s Dr. Lawrence and his three boisterous daughters, a widow the Honourable Mrs Pinkerton and her sister-in-law, Miss Pinkerton, Colonel and Mrs Duperrier, and the Lee-Mittisons. “Nearly everybody here was English.” 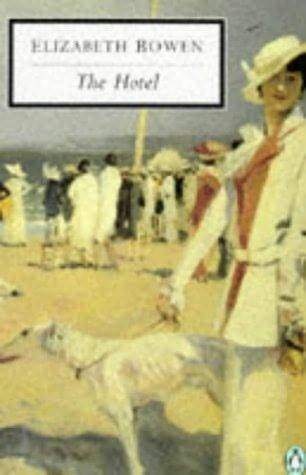 The glamorous Mrs Kerr is an enigma to the other guests. She “took fashion in and subdued it and remained herself.”  She spends her days doing very little: sitting on her balcony enjoying the view for hours on end (much to the disgust of the other English ladies who keep themselves busy with a range of hobbies). Mrs Kerr will occasionally, languidly stroll to the tennis courts to watch the physical activities of others. Nothing ruffles her, and while she seems to expend very little energy on living, she manages to fluster most of the other women who speculate on her marital staus. Sydney is possessive of Mrs Kerr and rather upset when she learns that Mrs Kerr’s only child, Ronald will join her.

Most of the guests are couples or families, but there’s another solo guest, the lonely middle-aged clergyman, Milton who, upon arrival, makes the horrible faux pas of using a hotel bathroom that has been sequestered for the exclusive use of Mrs and Miss Pinkerton. Both of the ladies are horrified by his (inadvertent) effrontery and Miss Pinkerton is “prostrated” by the knowledge that some rogue male is using her bathroom (and seeing her underthings). This early uproar underscores the divisions of the male-female world: “The best type of man is no companion.” Poor Milton’s arrival and departure are both marked with ignominy. Unmoored from his usual position he stumbles into one mess after another. There are more young women in the novel than young men–after all it’s 1920 so just a few years post WWI. One of the guests is Victor who is “unable to find a job since the War” and is “said to be suffering from nervous depression.”

While Colonel Duperrier finds himself plagued with vague longings and fancies, his wife keeps an eye on him from afar. The Lee-Mittisons are a rather bizarre couple who are horribly boring. Sydney certainly finds them tedious, but scratch the surface here and you find Mr Lee-Mittison who marches, literally, all the attractive young girls into his ‘expeditions’ while his wife, rather like a trained sheepdog herds them. “He did not care for young married women, while widows depressed him–poor little souls.” Mrs Lee-Mittison’s job is to be amazed, repeatedly, at all of her husband’s well-worn tales. as he “tell[s] graphically of life in the East, bearing his descriptions out with photograph albums.”  She’s his biggest fan and if any of the young girls try to skip out of the hikes, she pimps for him. She’s “at pains to waylay anybody in whom Herbert might be interested.”

After the underwhelming The Little Girls  which seemed rather pointless in the end, I thoroughly enjoyed The Hotel. While there’s no solid plot, the book follows the shifting relationships of the hotel guests who find themselves thrown together and thus select relationships–sometimes yes by who’d they rather be with but also by who they’d rather avoid.

There are some wonderful descriptions here. One of a trip to a now deserted villa owned by Russians (probably now dead) and another of a cemetery. Both of course underscore the transient nature of life.

The cemetery seemed quite deserted. Gashes of over-charged daylight pressed in through the cypresses on to the graves: a hard light bestowing no grace and exacting such detail. In the shade of the pillared vaults round the walls what already seemed like the dusk of evening had begun to thicken, but the rank and file of small crosses staggered arms wide in the arraignment of sunshine. In spite of the brooding repose of the trees a hundred little shrill draughts came between them, and spurting across the graves made the decorations beloved of Cordelia creak and glitter. A wreath of black tin pansies swung from the arm of a cross with a clatter of petals, trailing colourless ribbons; a beaded garland had slipped down slantwise across the foot of a grave. Candles for the peculiar glory of the lately dead had stuck in the unhealed earth; here and there a flame in a glass shade writhed, opaque in the sunshine.

The opaque quality of The Little Girls is also found in The Hotel, and when I finished the book, I pondered the toxic undercurrents of Sydney’s relationship with Mrs Kerr. One of the many things I carried away from this brilliant book is the letter writing which takes place within the novel. It’s a long lost art these days. Will there one day be a book ‘The Collected texts of  … ‘(fill in the name of a famous author). A bizarre thought.