Martin Michael Driessen’s novel  The Pelican is set in a quiet Yugoslavian coastal town. It’s the sort of place where everyone knows everyone else and knows their history–the exception being the occasional tourists who pass through. The story revolves around two discontent men: Josip–an unhappily married, war hero, cable car operator and lanky bachelor postman Andrej. These two men engage in parasitic blackmail schemes–each one blackmailing the other. 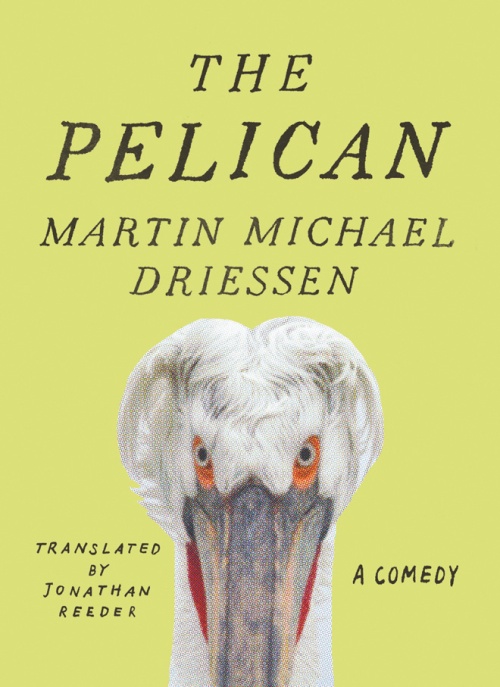 While Josip and Andrej are, on the surface, two very different men, there are some commonalities. Josip is trapped in a miserable marriage to a mad woman. Andrej is a failed soccer player who longs for a girlfriend, lives alone and has a thing for Princess Diana. While both men are trapped, each in his own way, they have managed to create a bit of excitement for themselves. Josip, through the use of ads for women, has managed to build a secret life, and Andrej has been opening people’s mail for years.

He liked to imagine that Marshal Tito would have decorated him for his vigilance, and for thwarting potential capitalist plots. He steamed open the envelopes in his kitchenette, and after having inspected the contents on the Formica table, he carefully glued them back shut.

Of course, if there’s money inside, well those items are not resealed. Andrej just helps himself.

The inevitable happens. Andrej discovers, through his little hobby of opening other’s mail, that Josip is having a torrid affair. He photographs Josip and his lover together and then starts blackmailing Josip. …

From this point, a danse macabre ensues. Andrej blackmails Josip wasting his ill-gotten gains and Josip, after discovering Andrej’s dirty secret begins blackmailing the postman. There’s a wry black, bleak humour at play here. Both of these men have sad lives, and the blackmail schemes are rather torturous–given that these men don’t have a great deal. But then when are blackmailers humanitarians? I found it somewhat implausible that Josip didn’t guess that Andrej was his blackmailer, but then plot wise, the mutual blackmail thing couldn’t have been constructed if Josip had guessed the truth.

While the tale has its humour (the title is The Pelican: A Comedy), it also segues into war, and there’s some animal cruelty/neglect. Considering how nasty these people are towards each other, it’s not too surprising there would be poor treatment of animals. Overall, I would say apart from some initial dark humour, in its exploration of failed friendship and wasted lives, this isn’t funny at all.

3 responses to “The Pelican: A Comedy: Martin Michael Driessen”