“Happiness for those unused to it is like food for the starving–a little too much can be fatal.”

The times are shaping my reading, and so I turned to an old friend for his signature bleakness, endless despair, death obsession and an exploration of the despicable depths of human nature. Who else could possibly cheer me up? Yes: Pascal Garnier, take me to the dark places of the human soul.

C’est la Vie is 11th Garnier novel I’ve read, and here are the rest: The Panda Theory, How’s the Pain?, Moon in a Dead Eye, The Front Seat Passenger, The Islanders,  Boxes, Too Close to the Edge, The Eskimo Solution, The A-26, and Low Heights.

C’est La Vie is a rather different novel for Garnier. Yes it’s full of his signature themes but it’s also a lot lighter. 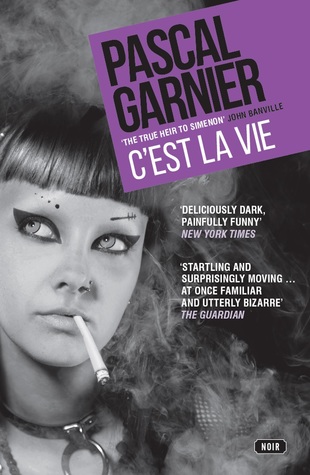 The book opens with middle aged author, Jean-François Colombier, meeting band member/drug dealer son Damian. They aren’t close, and the main point of the meeting, a rare event between these two, is so that Colombier can tell Damian that there’s a new woman in his life, journalist Hélène. Not that Damian cares.

The book moves forward in time. Yet another relationship has turned sour, and  Colombier, who was so optimistic about Hélène, meets her in a restaurant to turn over the keys to her apartment. And it had looked so promising.

Everyone has their little habits. You have to put up with them. We had lived together for five years, I with my nose in a glass, she with her nose in powder. Our different ways of anaesthetising ourselves. It wasn’t that I blamed her or that she blamed me but we were both upset because we had believed we would make it together. It’s not easy to escape the shipwreck of the forties, swimming in a dead sea as a thick as pea soup, with that island on the horizon that shrinks as you approach it.

But perhaps things are looking up. Colombier’s relationship with Hélène may be dead but his new book brings him fame and fortune. He’s not “exactly rich,” but his career is paying off. Then at a book signing he meets a woman named Eve. She’s young, rich, stable and nurturing. Soon they are living together in her inherited chateau. It’s a dream come true. And yet ….

I would be in Paris, and then … I wasn’t sure what next. I had no plan other than to escape a life that seemed to belong to someone else and to rediscover what I was used to–a more mediocre existence.

Colombier finds adventure in the shape of a conman, a crazy old lady and a young girl he picks up at party.

C’est La Vie is full of Garnier’s themes: an amused disgust with humanity, preoccupation with physical decay, and rampant disgust of the human body. Poor old Colombier has the humiliation of a boil on his bottom, and at one point looks at his reflection which isn’t improved by an all-night binge:

I had spent the previous evening drinking and looking in the mirror. The more I drank, the less I recognised the mottled skin dotted with blackheads, the nostrils filled with thick hair, and eyelids the colour of days-old ham that even the worst convenience store would have hesitated to sell to a blind man.

Garnier pushes the boundaries of his readers, and there are times when even I wince at some plot elements. Colombier comes off as a middle aged idiot whose angst and self-centeredness leads him to a surreal life lesson that scares him straight. We humans can have it all and it’s still never enough. This short novel isn’t nearly as bleak as the others I’ve read; it’s much less dark and is basically a middle-aged affluent man’s nightmare. It’s not my favourite, but I still enjoyed it.