Marion Brunet’s novel, The Summer of Reckoning, explores the near impossibility of escaping the cycle of poverty.  Sisters 16-year-old Céline and 15-year-old Johanna (Jo) should be on the brink of their lives, but poverty and now Céline’s pregnancy have combined to squash their futures. Since age 14, Céline, the more attractive of the sisters, had the curse of early sexuality, so all the local boys compete for her attention, while Jo, with two different coloured eyes, is prickly and considered strange. 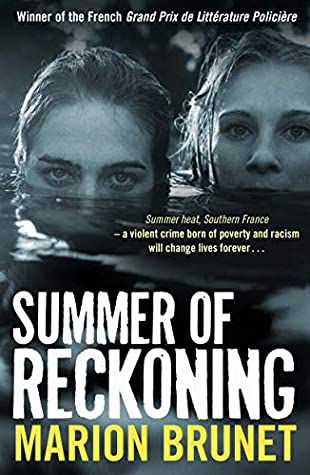 The sisters live with their father Manuel and mother Séverine in the Luberon, and while the family is poor, Manuel works on the villas that belong to the wealthy, often absent owners. This creates a surreal contrast, a sharp divide between the rich and the poor, with Céline and Jo trespassing onto the extensive grounds of magnificent deserted villas–enjoying the luxuries that the owners seem to have forgotten about.

Céline and Jo’s home life is rocky and tenuous, their social life almost non-existent, but when Manuel learns that his eldest daughter is pregnant, his deep rage encompasses his own failures as a man, a husband and a father. With Céline, refusing to identify the father, the scene is set for disaster. …

Everyone in the area hates Arabs, and a likely suspect seems to be Saïd, a friend of the family, a young man who hangs around the girls and who has some shady business dealings with builder Manuel.

The novel’s strengths lie in Manuel and Séverine’s bitterness which floats to the surface with the news of Céline’s pregnancy. It’s history repeating itself. Manuel stews on the knowledge that he wasn’t, and still isn’t, considered good enough for Séverine by her land-owning parents. Séverine, who is now going to be a grandmother at age 34, recalls she “did have her moment of glory, twenty years ago-twenty!” She dwells on how she became pregnant with Céline, and how marriage to Manuel seemed the only option at the time. Now roll on 17 years and here she is seeing the same thing happen to her eldest daughter … but this time there’s no question of marriage because Céline refuses to name the father.

There’s a dull simmering rage that runs throughout the story, and these characterizations feel real, bitterly, sadly real. With the exception of Jo, who wants more from life, none of these characters are appealing. Jo rations herself, subconsciously, refusing to meet the expectations of the local boys who have suddenly stopped panting after Céline now that she’s pregnant.

Jo is looking for ways out. She must be patient, but she has neither the age nor the temperament for patience. What she dreams of is explosions, magnificent events, nuclear wars. She is all pernicious expectation and anxiety. Céline’s pregnancy doesn’t actually change anything, and it’s again about her sister, the centre of attention. But there’s something hatching, buzzing in the thick atmosphere, in the family silences. She can feel it, like that sharp taste when biting into a green grape, on alert.

(Readers: there’s a scene of kittens being drowned. I get the addition of this scene: unwanted kittens can be drowned while life moves on (not the same for humans) plus the casual cheap brutality that permeates the tale.  Still the scene is there.)

One response to “Summer of Reckoning: Marion Brunet”