“When things get out of hand, people start reaching for their guns.”

Set in the barren oil field region of 1970s West Texas, Elizabeth Wetmore’s powerful debut novel, Valentine examines the fallout from the rape of a 14 year-old Mexican girl. Through this incident, the story examines female moral courage in a world in which the odds are stacked against their sex. The plot also explores the relationships between women who have tremendous courage individually and yet so often fail one another. In some ways, structurally at least, Valentine reminds me of Elizabeth Strout’s Olive Kitteridge . Both novels are set in regions that dictate lifestyle, and both novels are composed of interconnected stories. Yet in case I lead readers astray,  Valentine, a disturbing, haunting novel, is darker. 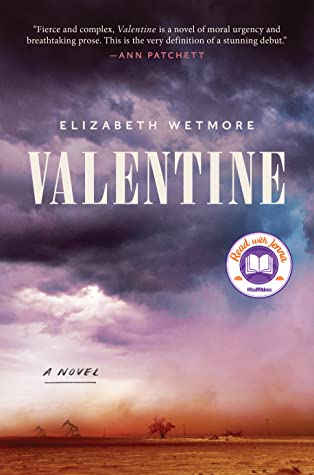 The novel focuses on the lives of several women, and begins with Gloria, the 14-year-old daughter of an illegal alien. One night, Gloria makes the mistake of getting into Dale Strickland’s truck. She’s driven out to the middle of nowhere where she is violently raped. The novel doesn’t detail the rape but opens with Gloria savagely beaten and struggling to survive.

Gloria manages to walk and crawl through the wrecked, deserted landscape of pollution, oil patches, pumpjacks and mesquite scrub until she reaches the remote farmhouse of the heavily pregnant Mary Rose who is at home with her daughter Aimee. Mary Rose, baseball bat in hand, lets Gloria in, and then the story flows from that point.

It’s obvious that Gloria, who changes her name to Glory, will never be the same again, but what is not so predictable is how other women in the small town of Odessa become swept up in the maelstrom. Mary Rose, who used to love her remote home, finds she can no longer stand the isolation, and she moves to town with her daughter. Ready to testify at the trial of Dale Strickland, Mary Rose loses her husband’s support and becomes the target of local hate.

Another character is Corrine (who could be a soul sister of Olive Kitteridge). Corrine’s husband, Potter, wanted to stop Gloria from getting into the truck with Dale Strickland, but his wife shut down the idea. Shortly thereafter, Potter is dead, and Corrine, an acerbic retired teacher, sinking into depression and drink, becomes involved, indirectly with the rape case when Mary Rose, the prosecution’s sole witness, moves across the street.

In the same neighbourhood, 10 year-old Debra Ann Pierce runs wild after her mother, Ginny, departs for greener pastures. The child’s neglect is stark and troubling, and yet no one steps in to help. It’s as though compassion in this town is dried up and lost in the dust of the oil fields.

Also in the neighbourhood is Suzanne Ledbetter who squirrels away cash from her Avon and Tupperware sales. Suzanne is a ‘planner’ so she saves for her daughter’s college and wedding, but there’s also a secret ‘charity’ account that is her “safety net.” Suzanne seems to be one of those perfectly organized women with the perfect life and the perfect husband but haunted by her past she is well aware that:

You stop paying attention and next thing you know somebody’s come and towed the family car away, or you come from from church one day and find all the furniture sitting on the lawn, sinking into the swamp.

Finally there’s Karla, a single mother at 17 who works at a local bar where the women “carry pistols and Mace” in their purses. Karla’s boss is a woman called Evelyn, and she’s armed with a cattle prod kept behind the bar. Here’s her advice to the young women she employs:

Start your engines, gals. Get ready to make bank. Keep your eyes peeled for the next serial killer.

Everyone knows that Dale Strickland is a violent, dangerous man, but he’s white and while the white community deals with Dale in its own way, Mexicans are not included.  The bar is the social meeting place, and the rape case is the main topic of conversation.

What we have here are two competing stories. A text book case of he said, she said, one man said just as plain as day.

A second sipped his beer and set it down hard against the bar. I saw that little Mexican gal’s picture in the newspaper, he said, and she didn’t look fourteen.

The women who work at the bar never leave alone, and they all know that Dale Strickland, a man from a privileged family, usually full of amphetamines, is as guilty as sin, but no one can afford to shake the status quo. The author capitalizes on the bleak, scorched landscape, a landscape in which all the vitality has been sucked away so that all that is left is a dusty, hollowed-out mess. The locals appear as a direct consequence of the terrain: tough, resilient and with a tendency to mind their own business. The rape case changes that and stains everyone. Mary Rose struggles with the knowledge that the courage she showed against face Dale Strickland was fragile, and Corrine struggles with loss and regret, knowing that her husband was “so much better at life.”

We lose the men when they try to beat the train and their pickup trucks stall on the tracks, or they get drunk and accidentally shoot themselves, or they get drunk and climb the water tower and fall ten stories to their deaths. During cutting season, when they stumble in the chute and a bull calf roars and kicks them in the heart. On fishing trips, when they drown in the lake or fall asleep at the wheel on the drive home. Pile-up on the interstate, shooting at the Dixie Motel, hydrogen sulfide leak outside Gardendale. Looks like somebody came down with a fatal case of stupid, Evelyn says when one of the regulars shares the news at happy hour. Those are the usual ways, the ordinary days, but now it is the first of September and the Bone Springs shale is coming back into play. Now we will also lose them to crystal and coke and painkillers. We will lose them to slipped drill bits or unsecured stacks of pipeline or fires caused by vapor clouds. And the women, how do we lose them? Usually, it’s when one of the men kills them. (Karla)