“I  wish I understood Americans,” said Charles-Edouard. “They are very strange. So good, and yet so dull.”

The delights and hazards of marrying out of one’s culture are explored with style and wit in Nancy Mitford’s light, entertaining novel, The Blessing. The introduction to my copy states that this is the author’s most “personal” novel as it “explains in barely veiled terms” why her love affair with a “womanising Frenchman” lasted for over 30 years. 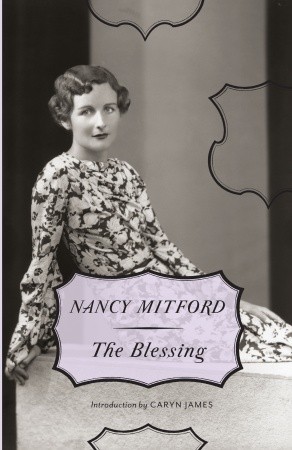 It’s easy to see that there will be problems ahead. Grace’s father wasn’t keen on his daughter “marrying a Frog.” He guesses that Charles-Edouard will not be a faithful husband, and senses that his daughter, who is blissfully happy at the family country estate tending goats, is ill-equipped for life in French society: “she would be a lamb among wolves.”  Trouble immediately begins, although the pliant Grace doesn’t see it, when the day after Charles-Edouard returns from the war, he whisks his wife and son off to France, with no notice whatsoever, to his family’s country estate, Bellandargues in Provençal. She meets his grandmother, the Marquise, his Tante Régine, and his grandmother’s lover, an elderly man who sports a pale green wig. Through this initial introduction, she learns, but fails to absorb, that lovers are openly accepted, not hidden away–at least not in Charles-Eduoard’s circle. Charles-Edouard’s family give Grace the once-over, decide she’s lovely, but that there will be problems ahead ahead–mainly due to extra-marital affairs.

Charles-Edouard’s family think “the English are very eccentric,” and that “they are half mad, a country of enormous, fair mad atheists.” They can’t understand what “induced” him “to marry an Englishwoman–these English with their terrible jealousy.” For when it comes to infidelity:

It is quite different for a Frenchwoman, she has ways and means of defending herself. First of all she is on her own ground, and then she has all the interest, the satisfaction, of making life impossible for her rival. Instead of sad repining her thoughts are concentrated on plot and counterplot, the laying of traps and springing of mines. Paris divides into two camps, she has to consider most carefully what forces she can put in the field, she must sum up the enemy strength, and prepare her stratagem.

Then Grace is whisked off to Paris–just as she was getting used to the French country estate (belatedly she learns that her husband hates country life), and it’s here, mingling at dinner parties and soirees in Paris, we find Grace mostly out of her depth–especially when she realises there are a string of other women in Charles-Edouard’s life. …

Several nations are skewered here. From child-rearing, marriage, adultery, diet, the fun comes from the clash of cultures. There are a couple of English ladies Charles-Edouard decides are lesbians: “Is it today you go to the English Lesbians?” And then there’s Grace’s old school friend, Caroline; Charles-Edouard doesn’t get the schoolgirl crush thing, and insists on calling her a lesbian too. Caroline is now married to an obnoxious, loud, know-it-all American, Hector Dexter who, unfailing tells everyone around the dinner table exactly what’s wrong with their respective countries. France is, according to Dexter, suffering from “a malaise, a spirit of discontent, of nausea, of defatigation, of successlessness,” while England, “this little island of yours is just like some little old grandfather clock that is running down.” And of course, Dexter also thinks that Americans have superior morals when it comes to marriage and adultery:

We, in the States, are entirely opposed to physical relations between the sexes outside the cadre of married life. Now in the States, it is usual for the male to marry at least four, or three times. He marries straight from college in order to canalize his sexual desires, he marries a second time with more material ends in view–maybe the sister or the daughter of his employer–and much later on, when he has reached the full stature of his maturity, he finds his life’s mate and marries her. Finally  it may be, though it does not always happen, that when he has raised this last family with his life’s mate and when she has ceased to feel an entire concentrated interest in him, but is sublimating her sexual instincts into other channels such as card games and literature, he may satisfy a longing, sometimes more paternal than sexual, for some younger element in his home, by marrying the friend of one of his children, or as has occurred in certain cases known to me personally, one of his grandchildren.

Grace ultimately is attracted to Charles-Edouard because he isn’t English. With him, she avoided a “dull” safe English marriage. Charles-Edouard may be charming, but he has an escape clause for the marriage if it doesn’t work out, and then at one point, we see a callous side when he plots to ruin a carpet Grace makes as he doesn’t find it aesthetically pleasing. Eventually, it dawns on Grace “that she was, perhaps, more in love than he was.”

But since the title is The Blessing, the story goes beyond the troubled marriage to Sigismond. Charles-Edouard doesn’t like the British Nanny’s influence, and he wants his son to emulate Napoleon rather than Garth, a British cartoon character. Nanny doesn’t understand what a bidet is: “what is that guitar shaped vase for?” and bemoans the French diet:

Course upon course of nasty greasy stuff smelling of garlic.

In time Nanny finds another British nanny in Paris, and “the two nannies clung to each other like drowning men.” Sigismond grasps that the cultural values and expectations of behaviour from each parent are different, so he learns to manipulate the situation between the estranged couple to his advantage.

The ending was a little too Disney for me. Overly optimistic IMO but no doubt the ending reflected the author’s decisions. This book is a light, amusing treat which delights in Grace’s painful awakening as she realises that when she married outside of her culture, she was unaware that French values would be so different. Of course, the elephant in the room is that no … what’s normal in Charles-Edouard’s aristocratic family is not the standard for the rest of France. Grace did not know the man she married. Frenchman or not.