“Some people pave a short way to hell.”

In Joe Lansdale’s hard-boiled noir novel, More Better Deals, it’s Texas in the 60s and Ed, a used car salesman makes a marginal living pushing junkers on a used car lot. There are a few tricks of the trade: moving the odometer back, blacking tires, plugging holes in the transmission. But a deal’s a deal, and Ed doesn’t have trouble sleeping nights even though he knows most of the customers have been ripped off. Boss Smiling Dave, “about two hundred and fifty pounds of lard on a five-foot frame mounted on tiny feet, had a cheap pistol”  in his desk just in case any of the customers think they have a complaint. Smiling Dave’s advice:

Don’t grow a conscience., Ed. It’s bad for your bank account. You know what they say. Buyer beware, and better you fucked than me.

Customers are suckers, and every sale presents an opportunity to screw someone over and grab a commission. It’s a marginal life, and Ed’s in a rut. His mother, a bitter alcoholic wreck, thinks that Ed can do better since he can ‘pass’ for white, so there’s nagging pressure to improve his life and the life of his sister. And one day the opportunity for Ed to get ahead comes knocking in the shape of a cheap blonde who’s behind on her car payments. 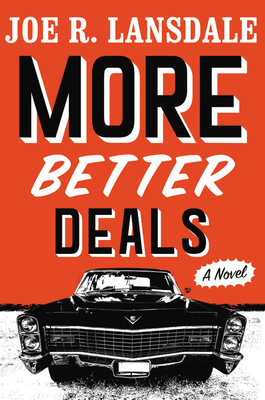 Ed tries to repo a red Cadillac and runs right into Nancy Craig, a “blond in a cheap out-of-the-bottle way.” Barely dressed, cocktail in hand, she invites Ed inside her home and claims that her abusive husband, a travelling encyclopedia salesman is on the road, presumably with the Cadillac. Nancy, hardly an oppressed housewife, oozes sex and availability; “she could make Billy Graham pull down his pants and jack off in five o’clock traffic.” Nancy and her husband own a run-down drive-in and a pet cemetery, and to Ed, it’s a sweet deal; get the blonde, the drive-in and the cemetery. Frank, Nancy’s gorilla of a husband is in the way of that plan of course, but a few sweaty hot sexual encounters later and Ed signs on for murder.

Nancy is a bad woman, but that doesn’t stop Ed. Since he’s ok with ripping off customers, he’s apparently also unperturbed by Nancy’s explanation of how to run a pet cemetery.

Be honest with you, Ed, what we found out is digging a hole is work. So we mound the dirt up a little, scrape some here or there and make it look like a grave, then we take the beloved off in the woods and throw it in a ditch somewhere.

That would be a hint to make a run for it, but Ed is too wrapped up in the hot sex to hear alarm bells.

It may sound as though More Better Deals is a typical noir novel–perhaps it even sounds like something you’ve read before: the bad blonde, an inconvenient husband, and a murder plot. In the hands of Joe Lansdale, however, this book is something special. A simple debt collection launches our narrator into hell–he may think he’s landing a sweet deal, but in this tale of greed, lust and murder, just who is screwing who is up for grabs. Lansdale laces this tale with some wonderful touches, violent cops, crude sex and a narrator who’s bad but not as bad as he needs to be. For Lansdale fans, I think this is one of his best, and for anyone who’d like to read a hardboiled noir novel, go no further.

They throw the switch and the devil is showing you your hotel room.