Listening in the Dusk: Celia Fremlin

The novels of Celia Fremlin remind me of the intensely psychological crime books written by one of great favourites: Ruth Rendell. In The Hours Before Dawn, a young mother, overwhelmed by her new responsibilities, fails to see the danger close at hand. In Uncle Paul, the inescapable past catches up to three very different sisters. That brings me to Listening in the Dusk, a novel set in a third rate London boarding house, and here the psychological threat is the sensation of ever encroaching danger. Do the walls protect the tenants from the hunter who lurks outside? 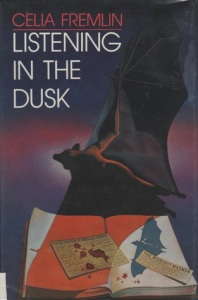 I have a soft spot for novels set in boarding houses and hotels as the plots hold the promise of throwing characters together in settings which create relationships which would not exist in other circumstances. This is definitely true in Listening in the Dusk and the boarding house owned by the eccentric Mrs Harman–a woman with a penchant for taking in strays–not cats–stray human beings.

“You’ll like Hetty, Alice, she’s as kind as can be, as I expect you’ve discovered. She just loves people with problems. Do you have a problem, Alice? A real, juicy humdinger of a disaster? If so, you’re in!”

Alice, “a deserted wife, pushing forty,” arrives on Mrs. Harman’s doorstep. Mrs. Harman, “call me Hetty,” is an unconventional, haphazard landlady. Alice has no references and she’s desperate, so she moves in with just a suitcase and a set of Jane Austen novels, to the only space available–a bleak attic room which serves as a storage area for all the other tenants. Somehow, the room which is beyond substandard, seems a perfect place for Alice to heal from her husband’s unexpected betrayal. It matters little that the room is freezing, filthy and full of junk; to Alice it’s a refuge. Maybe the dump just matches her mood.

It had been a good marriage, despite being childless. Or maybe because of being childless, each of them having no one but the other to please. Over the years, they’d had lots of fun together as well as love; indeed, it was the memory of the fun, and the betrayal of it, that hurt even more than the betrayal of love. She felt that she could perhaps have forgiven Rodney’s loving another woman; it was the drying-up of intimate, long-standing jokes that hurt most; the blank uncomprehending stare with which he began to greet her amusing little anecdotes that would once have sent them into fits of shared laughter. This was the real betrayal.

Thanks to Hetty’s unconventional arrangements, Alice finds herself mingling with the other tenants–all other strays in one way or another, all damaged people. But perhaps the biggest puzzle is Mary, a young girl who fends off all attempts at friendship, and who can seem downright hostile when approached.

The novel’s setting and characters are marvelously done. The serial killer aspect was a tad too dramatic for my tastes and the other two Fremlin novels I read, also Women in Peril tales, focused on fear and paranoia. Serial killers within crime novels up-the-stakes and take crime to another level. Still I enjoyed Listening in the Dusk, but it ranks at the bottom of the 3 read so far. If you like Ruth Rendell, and you haven’t tried Celia Fremlin, what are you waiting for?

2 responses to “Listening in the Dusk: Celia Fremlin”