“At our age, news is all bad. I don’t like standing in line for the guillotine.”

It’s the 1970s, and 69-year-old, retired literary agent Joe Allston lives with his wife Ruth near Palo Alto, California. Their only son, Curtis died years earlier while surfing, maybe an accident, maybe not, and now Joe and Ruth live a quiet life. Joe, “irritable and depressed,” is pushed by his wife into gathering together all of the papers and notes from his career in order to write a memoir:

The writers I represented left their monuments, consequential or otherwise. I might have done the same if I had not, at the bottom of the Depression, been forced to chose whether I would be a talent broker or a broke talent. I drifted into my profession as a fly lands on flypaper, and my monument is not in the libraries, or in men’s minds, or even in the paper-recycling plants, but in those files. They are the only thing that prove I ever existed.

Joe who sees himself as a “wise cracking fellow traveler in the lives of other people and a tourist in his own,” has many regrets about his life; he feels as though he’s been a “spectator bird” and “that there had not been one significant event in life he planned.” As Joe mulls over the dullness of his life and the road that brought him to this point, a postcard arrives from Astrid, a Danish countess the Allstons met during a holiday decades earlier. The postcard revives old memories and Joe digs out a journal he kept of the trip. The trip to Denmark was partly for Joe to investigate his roots and discover exactly why his mother left Denmark, setting sail for America at age 16. The trip is also an escape from the guilt and regrets over their estranged son’s death. While the holiday should be restorative, it becomes an unsettling Jamesian exploration of the Innocent American Abroad. 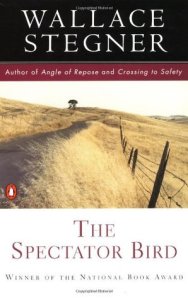 Joe narrates The Spectator Bird, and when the novel opens, it’s clear that Joe is obsessed with aging and dying. This state of affairs isn’t helped by the fact that a neighbour is dying of cancer, or that Ruth visits the local care home and encourages Joe to do the same. Then on top of that, another neighbour, an elderly doctor who is falling apart slowly but still manages to put a brave face on it, harasses Joe about his morbid frame of mind.

I had been sitting on the old timbers for about ten minutes when Ben Alexander drove in from the county road in his convertible. His top was down, his hair was tangled, and he had Edith Patterson in the seat beside him, looking like a racoon in her wraparound Hollywood shades. It was all so young and gay and California that I had to laugh. Ben is the very chief of the tribe that makes old age out to be a time of liberation. He is writing a book about it.

Ben and Ruth can see that Joe is having a miserable time aging, and they both have strategies, which always fail, to shake Joe from this frame of mind. The result is that Ruth has become more of a mother to Joe–so much so that he keeps her at arm’s length emotionally as he struggles with regrets and aging. Poor Ruth, who likes to air all emotions, has the patience of a saint. We see Joe in the present day, uncomfortable in a shifting social environment, reluctant to be around young people as they remind him of what he’s lost. He wonders if they notice him, and at the same time when he learns of a neighbour’s imminent demise he can’t confront the reality of death and instead finds it easier to pretend all is normal.

Getting old is like standing in a long, slow line. You wake up out of the shuffle and torpor only at those moments when the line moves you one step closer to the window.

The book goes back and forth between 1970s California and Joe’s reading of the 1954 journal which Ruth insists be read aloud after she spies it in Joe’s hands. Joe does so with some reluctance as it reveals both his state of mind at the time and some rather unsavoury events that took place.

All too often authors use journals from the past or an unexpected postcard as a cheap segue into the past. Here the past and the present are perfectly and skillfully blended as we see Joe in his 40s and Joe decades later farther down the road as he faces old age. This is an incredibly introspective novel, told from Joe’s often morbid view, and that morbid view, particularly striking on the subject of age, is alleviated by Joe’s self-deprecating humour. Since this is Joe’s story, Ruth is an appendage–the little woman in the background and while she sighs a lot at Joe’s attitude to life, we never really get to know her. But then I don’t think Joe knows her either. … I can’t imagine that they had much of an emotional life together. It can’t have been easy being married to Joe. I listened to the audio book version which was beautifully read by Edward Herrmann, but unfortunately Ruth’s voice comes across as simpering.

But apart from those criticisms, I loved this book and enjoyed it far more than I expected to. This is a sombre examination of the life of one ordinary man–nothing heroic in his past, no great deeds, but as he ages and sees that nothing of him will remain after his death, he is full of regrets. This is a man whose choices were inseparable from, and seminal to, his character.

My commitments are often more important than my impulses or my pleasures, and that even when my pleasures or desires are the principal issue. There are choices to be made between better and worse, bad and better good and good, but why cry over it twenty years later? Because in every choice there is a component maybe a big component, of pain .