A Long Way Off: Pascal Garnier

“When exactly had he lost it? We wake up one day and all our toys which were so magical and full of life are suddenly nothing but inert, futile, useless objects …”

In Pascal Garnier’s darkly funny novel, A Long Way Off, a middle-aged man and his estranged daughter embark on an aimless road trip. Other authors might turn this into a Buddy novel–or even worse (gag) a novel of redemption with the father finally realising just what a dick he’s been while his daughter slowly comes to appreciate him and then … sob… forgives him. Hand me the hanky. But … no wait.. this is Pascal Garnier we’re talking about, so leave those sickeningly sweet platitudes at the door and embark on a nightmarish trip of madness, murder and decay. 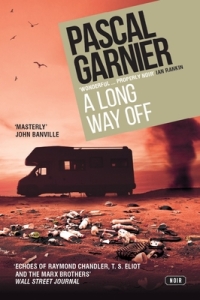 It’s at a dinner party that Marc first shows signs of going off the rails, but then again perhaps it’s been a long time coming and no one ever noticed before. After “17 years of purgatory” Marc’s first wife absconded with an “absolutist Chilean poet.” She returned occasionally only to leave again, and Marc mainly raised their child Anne alone. But Anne:

“had in turn put him through the wringer until both women eventually left home for good, devoting themselves to dubious experiences somewhere else, where he was not. Marc had been thrown by the wayside, rusted, dented put out for recycling.”

His second wife, Chloé, an inexhaustible salvager of discarded bedside tables, seems to have renewed Marc in a similar fashion. She “picked him up after his divorce. She had stripped him down, polished him up and found a cosy place for him in her home.” There are signals that Marc, well into middle age, is disconnecting from his life, and then one day, on a whim, he adopts a decrepit cat named Boudu. Shortly after this, Marc decides to go visit Anne who now lives in a mental asylum. He decides to take her on a trip, and once he signs the necessary paperwork acknowledging the risks of taking Anne outside of the asylum, they hit the road.

Really Marc knows better than to take Anne anywhere, but there’s some horrible, magnetic force that pulls him to his fate. And let’s not forget that self-destructive streak. As he disconnects from his old life, he imagines that he has newly-gained freedom, but he rapidly succumbs to Anne’s domineering personality. It’s obvious that sexually voracious Anne, who’s very aggressive, is dangerous, and yet Marc still doesn’t wake up to the truth. Marc accedes to the force of Anne’s demands. Imagining that Chloé may have the police on their tail, Anne and Marc sell the car and buy a camper van, establishing up a bizarre domestic unit.

He felt like a trapeze artist bouncing into the net after a failed trick, caught in a spider’s web he could no longer escape from, lumbering, ashamed, in a trap of his own making. Perhaps there was still time … He could leave some money for Anne at the hotel, jump in the car … he could-but already he knew he would not. He was lacking that one small thing that save a man from drowning, the kick of rage that lifts you up from the bottom and propels you to the surface. It was still a long, long way off. He was not there yet.

There are not many taboos left in literature but there’s one here. So be forewarned. Garnier’s The Islanders is a trip into how two seemingly normal, somewhat functional people combine and fuse into murderous, toxic, self-destructive isolation. There’s some of the same elements here: two people who suddenly partner up with bad results. Garnier’s typical humour pierces and skewers notions of family, mining images of death and decay as Marc and Anne proceed on their road trip to hell.

There were a lot of people on the beach, little blots of colour that grew bigger as you drew nearer. It made you wonder where they had come from, these people you saw nowhere else. The sun had probably just conjured them up, Their average age was quite high. “Must be open day at the cemetery.”

6 responses to “A Long Way Off: Pascal Garnier”